Below is an overview of monk fruit, combining the best of Western Science, Oriental Medicine, Traditional Chinese Medicine (TCM), Shamanism, Folklore, and a wide range of healing modalities. Gain a balanced and thorough understanding of the healing properties of monk fruit.

How to take FULL advantage of Monk Fruit's healing powers... 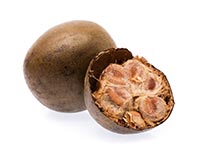 JOIN ME in an exploration of the healing herb, Monk Fruit (Lo Han Guo). Dive deep into the benefits and applications of monk fruit, from Eastern and Western perspectives, and so much more!

Monk fruit is a perennial climbing vine in the gourd family, Cucurbitaceae. Young stems are covered with white pubescence and red granular hairs. Older stems are dark purple. Alternate leaves are ovoid with an acute apex and cordate base. The flowers bloom from June to August and fruit from August to October.

History/Folklore: The name monk fruit is said to come from its use by the first Buddhist monks in the 13th century. Its Chinese name, Lou Han Gou, meaning monk’s fruit, originates from its similarity to the sunburnt, rounded belly of the first Arhat, named Lou Han. An Arhat is a person or monk who obtains enlightenment by following the teachings of another.

Monk fruit is used to make tea or boiled in stews to help maintain strength and health. It is typically used raw medicinally. It is mainly a non-sugar natural sweetener loaded with nutritional value.

In China, a popular tradition is to drink monk fruit tea at the end of the Spring and the beginning of Summer to prevent seasonal colds and coughs. Monk’s fruit is collected in the Fall when the fruit is turning light to dark green. It is then dried to remove the hairs.

Modern research confirms that non-sugar sweetener found in monk fruit is 300 times sweeter than cane sugar. It is also calorie-free making it one of the best sugar substitutes for those who cannot eat sugar. It is considered the best sweetener for diabetics.

Monk fruit helps soothe sore throats, even from over speaking. In TCM, the function of the sweet taste identified with this herb helps slow down acute reactions and detoxify the body. Sweet flavored herbs nourish Qi and Blood and have an overall tonifying effect.

The mogroside compounds found in monk fruit are largely associated with the plant’s natural sweetness. Unlike processed sugars, they increase insulin and may inhibit diabetes. They have unique antioxidant and anti-inflammatory properties that help to prevent cancer and heart disease. They also inhibit certain harmful molecules and help prevent damage to DNA.

Monk fruit was introduced to Europe in the 1930s. It was reported to be the main ingredient in “cooling drinks” that were a remedy for hot weather, fevers, and lung infections. It arrived in the U.S in the early 20th century. It was not until the late 1970’s that a Japanese researcher decided to concentrate the plant as a medicine and sweetener.

Monk fruit is calorie-free, has a low glycemic index, and has zero carbs. The extract from the dried fruit is 150 to 300 times sweeter than table sugar. Monk fruit will not impact your blood sugar levels.

As monk fruit is an all-natural sweetener it has none of the side effects of artificial sweeteners.

Monk fruit is harvested when it is green. It becomes brown on drying and is rarely used in its fresh form as it is hard to store when fresh. The fruit is slowly dried in ovens to preserve its flavors and properties and remove unwanted bitterness and astringent flavors.

How to use Monk Fruit (Lo Han Guo) and take FULL advantage of it's healing powers!