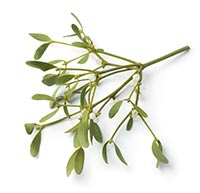 Known for aiding epilepsy and other convulsive nervous disorders, mistletoe effectively numbs nerve action to distal parts of the body away from the main organ that may be causing the problem, and it is in this way that it aids with convulsions and epilepsy. Ancient traditions suggest the mistletoe be kissed when touched or stepped under.

Below is an overview of Mistletoe, combining and interpreting the best of Western Science, Traditional Chinese Medicine (TCM), Shamanism, Folklore and more. Gain a balanced and thorough understanding of the healing properties of Mistletoe.

Mistletoe is an evergreen parasitic plant. When one of the sticky berries comes into contact with the bark of a tree, generally through the aid of birds, it will, after a few days, send out a thread-like root that will pierce the bark and take advantage of the juices in the bark to sustain itself.  The stem is yellowish and smooth. The leaves are tongue-shaped and broader at the end and grow in pairs. The flowers are small and arranged in threes with a male and female flower appearing on different plants. The flowers open in May and the globular smooth white berries ripen in December. The genus Viscum has thirty or more species.

It grows on the branches of deciduous trees, where it forms pendant bushes 2-5 feet in diameter. Mistletoe particularly likes old apple trees, it is rarely found on pear trees, but it also likes ash, hawthorn, and lime trees. Found throughout Europe, South Africa, Southern Asia, and Australia.

Caution: Large doses are not recommended as they can cause convulsions. Children especially need to be careful of the berries.

History/Folklore: There are actually two types of mistletoe – Phorandendron flavescens, a decorative plant native to the east coast of North America, that is commonly used for decoration, and Viscum album of European origin that is used as a medicine and sacred plant.

Because it can only be reproduced by seeds ancient cultures believed it to be an excrescence of the tree.  If you rub the berries on the smooth bark of the underside of tree branches they will adhere in clefts made for them.

The plant’s Latin name “Viscum” derives from the juice of the berries being sticky and viscous.

The Druids held the plant in great reverence.  They would search for it wearing white robes, gather it in ceremony and separate it from a tree with a golden knife.  It was always cut at a particular stage of the moon, at the beginning of the year, and only sought when a druid had had a vision directing them to seek it.  If no visions came for a long time, or if the plant fell to the ground it was considered and ill omen and that  misfortune would befall the nation.  They felt the plant protected the person wearing it, and any oak that it grew upon was respected for its curing properties.  They used it to protect against ill fortune, as an aphrodisiac, an antidote to poisons and to bestow long life and fertility.  Young acolytes were sent around with mistletoe branches to announce the new year and it is likely that this ceremony is the root of our hanging mistletoe during the Christmas holidays.

The Scandinavian god of Peace, Balder, was slain by an arrow made of mistletoe.  He was revived by the other gods and goddesses, with mistletoe being thereafter entrusted to the goddess of Love and ordained that everyone would kiss the mistletoe to show the branch had become a symbol of love and not hate.

The tradition of hanging the mistletoe in winter began with the Greek festival of Saturnalia, celebrated in late December.

The Swedish use mistletoe as a dosing rod to find gold mines. In the areas around Austria and Italy it is said that mistletoe will make you invisible.

It is the female plant that produces the milky white berries, the male plant produces the yellow flowers.  The sap of trees bearing berries was viewed as the semen of the woodland gods and therefore considered scared. Rubbed onto a suitor it was thought to be a pure aphrodisiac.

In Asia the plant is considered edible.  They also use the herb to help cancer patients as it has been found to improve the survival rate and quality of life. Mistletoe extracts have been studied extensively in Europe as a supplemental treatment for cancer therapy.

The wood of mistletoe has been found to have twice as much potash and five times the amount of phosphoric acid as the wood of its host tree.

Thrush love mistletoe and eat its berries and it has been said that in winter when food is scarce the stems and foliage have been given to sheep and they too, eat it right up.

In Brittany, the plant is called Herb de la Croix because a local legend said that the crucifix of Christ was made from mistletoe and that is why the plant, in shame reduced itself to becoming a parasite.

The dried leaves of mistletoe can be made into a tincture with wine.

Combined with valerian root and vervain it can treat a wide variety of nervous disorders.

In Sweden, it was said a person afflicted with epilepsy would carry a knife with a handle made of oak mistletoe to ward off attacks.