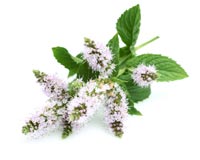 Mint has been historically enjoyed as a tea and food flavoring. It is a well known cooling herb that can promote sweating, ease colds and flus, and aide headaches, menstrual cramps and other aches and pains.

Below is an overview of mint, combining and interpreting the best of Western Science, Traditional Chinese Medicine (TCM), Shamanism, Folklore and more. Gain a balanced and thorough understanding of the healing properties of mint.

Mints are aromatic, almost exclusively perennial, with wide-spreading underground and overground stolons and erect, square and branched stems. Leaves are arranged in opposite pairs, with downy and serrated margins. Leaf color can be dark green, grey-green, purple, blue, and sometimes pale yellow. Flowers are white to purple and the fruit is a nutlet containing one to four seeds. They grow fast, can be considered invasive interbreeding easily which can make it difficult to distinguish all the varieties.
Mint grows in many environments, but they grow best in wet environments and moist soils. Native to Mediterranean and western Asia. Cultivated throughout China, especially in Jiangsu, Zhejiang and Jiangxi.

Caution: Some people are allergic to mint. Not recommended for internal use by nursing mothers as it may lead to insufficient lactation. But it is used by breastfeeding mothers to rub on dry, cracked, and sore nipples.

History/Folklore: Known in Greek mythology as the herb of hospitality as it was one of the first herbs to be used as a room deodorizer. It was strewn across the floor to cover the smell of the hard-packed soil. Stepping on it helped spread the scent throughout the room. The name mint derives from the Greek name of the nymph Minthe (Pluto’s lover) who was transformed into a mint plant. The Greeks also used the plant to stop hiccups and clear the voice. Romans used it as a digestive aid and mouth freshener then introduced it to Britain.

The ancient Pharisees received tithes of mint, anise and cumin, proving the herb’s high esteem in that culture. Culpepper said, “Rose leaves and mint, heated and applied outwardly cause rest and sleep.” He also said, “The decoction or distilled water, helps in the stinking breath proceeding from corruption of teeth; and stuffed up the nose, purges the head.” In the 14th century, mint was used to whiten teeth with the distilled oil used to flavor toothpaste; it was also added to candies and perfumed soaps.

Mint was likely taken to the U.S. by the pilgrims for cultivation and use.

Mint is a potent source of antioxidants. It has the highest antioxidant levels compared to any other herb or spice. It is useful for treating digestive disorders, irritable bowel syndrome (IBS), colds and flus, and lowering fevers.

A study conducted by the International Journal of Neuroscience indicated that mint can enhance memory and improve alertness. Menthol, an active compound found in mint, is known to stimulate the hippocampus that controls mental clarity and focus. The herb can be eaten, enjoyed in tea, or used as an essential oil for aromatherapy to induce mental clarity and calm anxiety.

In Oriental medicine mint is considered the strongest cooling herb for promoting sweating. This makes it an excellent choice for treating what are known as Wind Heat invasion colds and flus, where headaches, fever, upset stomachs, and yellow mucus prevail.

Breastfeeding mothers who experience sore and cracked nipples have found relief from applying mint to the skin to relieve the pain of breastfeeding. One or two drops of essential oil mixed with 3 to 4 tablespoons of gel or ¼ cup of water applied gently to the skin is all that is needed.

Known as pudina in India, mint is widely used around the world in tea, beverages, candies, jellies, syrup, and a variety of favorite culinary dishes, either cooked or raw.

Mint is harvested at least two to three times a year, depending on the region.

Mint is a particularly good source of vitamin A, good for eye health and night vision.

To reduce the tannic and caffeine effects in your tea, use mint, spearmint, or peppermint sprigs while steeping your tea.

There are three chief species of mint in cultivation and general use: spearmint (M. viridis), peppermint (M. piperita), and pennyroyal (M. pulegium).