Milk thistle has been historically depicted in heraldry, art, and poetry. It is revered as an outstanding liver medicine, tonic, and food. Milk thistle is used to treat cirrhosis, jaundice, hepatitis, and gallbladder disorders. The active constituent in milk thistle is silymarin which is especially known for its anti-oxidant and anti-inflammatory properties. It is particularly used to treat the liver but can also be used to treat the kidneys and gallbladder. It is often suggested as a treatment for alcoholic hepatitis and drug rehabilitation. The herb is being studied for possible anticancer properties.

Watch a short video, from Ann Christensen, Founder and Creator of White Rabbit Institute of Healing™ – Milk Thistle, an Antihistamine?

How to take FULL advantage of Milk Thistle's healing powers... 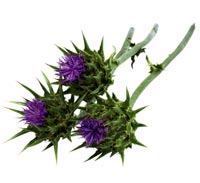 JOIN ME in an exploration of the healing herb, Milk Thistle (Da Ji). Dive deep into the benefits and applications of Milk Thistle, from Eastern and Western perspectives, and so much more!

Milk thistle is in the daisy family, Asteraceae. It grows as an annual or biennial. The erect stem is tall, branched and furrowed but not spiny, with disc shaped pink to purple solitary heads at the end. Large alternate leaves are waxy-lobed, toothed and thorny. It is native to the Mediterranean, North Africa, and the Middle East and is now found throughout the world. It is possibly native to southeastern England.

Caution: Considered safe, however touching the thorns can cause a rash in some people, so wear gloves while harvesting fresh plants.

History/Folklore: Milk thistle seeds are considered one of the most important liver herbs available. Its potent extract called silymarin is used for liver support and is the only substance known to protect, revive, heal, and detox. Milk thistle also stimulates protein synthesis in the liver and protects liver cell membranes while generating new cells in the liver. Remember, the liver’s main functions are to process nutrients from food, make bile, remove toxins from the body and build proteins. Therefore, protecting and strengthening this organ is important for the whole body.

Milk thistle’s name derives from its leaves with sharp points that prickle, stick, or pierce and contain a milky sap.

Milk thistle can be used to treat the toxic effects of acetaminophen (i.e. Tylenol), which can cause liver damage when used in high doses. It is often suggested for treatment for alcoholic hepatitis, fatty liver, radiation, viral hepatitis, and alcoholic cirrhosis.

The active constituent in milk thistle is silymarin. Silymarin is a group of flavonoids (silibinin, silydianin, and silychristin) that are known for repairing liver cells damaged by alcohol and other toxic substances. It is known for its anti-inflammatory and antioxidant properties.

Milk thistle may interfere with medications that are broken down by the same liver enzymes. These include allergy drugs (Allegra), drugs for high cholesterol (including statins such as lovastatin, Mevacor, Altocor), anti-anxiety drugs (Xanax, Valium, and Ativan), anticoagulant drugs and blood thinners (Plavix and Coumadin), and some cancer drugs. Check with your healthcare provider if you are considering using milk thistle, especially as part of a detoxing program.

New research indicates that milk thistle aids weight loss due to its ability to assist the breakdown of fats in the blood and body.

Milk thistle has been shown to have anticancer effects on both breast and prostate cancers and can protect the kidneys against toxicity from chemotherapeutic substances.

Milk thistle supports immunity and stimulates neurons, helping to reduce the possibility of Alzheimer’s disease. It mimics the effects of estrogen and has shown signs of improving bone health by helping to prevent estrogen deficiency-induced bone loss.

In China, the seeds (Shui Fei Ji) are used specifically to protect the liver, increase bile production, and to protect against oxidative exposure, including oxidative exposure from radiation treatments. It is also commonly used in China to treat cirrhosis, gallbladder ailments and as an antioxidant and antiviral.

Even though it has been used as a medicine for over 2,000 years in many cultures, it has often been considered an invasive weed. The herb has always been particularly popular in Greece, Italy and Germany. In European folk medicine, it has been used as a liver tonic, a mild laxative, a hangover remedy, and a treatment for motion sickness and warts.

The Roman herbalist, Pliny the Elder described milk thistle as “excellent for carrying off bile.” The Ancient Greeks and Romans used milk thistle to treat snake bites and liver diseases.

In Ayurvedic medicine, milk thistle is used to enhance immunity, treat psoriasis and as a liver tonic.

In tincture or extract forms, either alcohol or glycerin are used as the base.

Roasted milk thistle seeds have been used as a coffee substitute.

Milk thistle seeds are best harvested when the artichoke-like parts become swollen. Using a knife you can cut them in half to expose the seeds in the center.

In the Language of Flowers, the thistle (like the burr) is an ancient Celtic symbol for noble character and birth.

The prickly leaves of the milk thistle plant yield punishment to those who dare to disturb them. Disarmed of their prickles, the young leaves can be boiled to make what is considered an excellent blood tonic and cleanser.

Milk thistle extract made from its leaves is used to inhibit corrosion of steel and as an antioxidant food packaging material. Biodiesel is produced from milk thistle oil.

Milk thistle roots can be eaten raw or boiled, buttered, par-boiled, or roasted. The spiny bracts on the flower heads are eaten like artichokes.

The thistle has been the national emblem of Scotland since the reign of Alexander III (1249–1286) and was issued on silver coins by James III in 1470.

In Winnie the Pooh, the thistle is Eeyore’s favorite food.

How to use Milk Thistle (Da Ji) and take FULL advantage of it's healing powers!