Magnolia flowers and buds have a long tradition in Chinese Medicine for treating nasal congestion, asthma, anxiety, whitening skin, and calming toothaches. While there are overlapping functions between all parts of this plant there are distinctions worth noting between them. See Magnolia Tree for more about the functions of the bark, roots, and seeds. Compared to these parts of the magnolia, the flowers are considered to focus more on the upper respiratory and digestive functions of the body.

Watch a short video, from Ann Christensen, Founder and Creator of White Rabbit Institute of Healing™ – An Often Forgotten Healing Attribute of Magnolia…

Below is an overview of magnolia flower, combining the best of Western Science, Oriental Medicine, Traditional Chinese Medicine (TCM), Shamanism, Folklore, and a wide range of healing modalities. Gain a balanced and thorough understanding of the healing properties of magnolia flower.

How to take FULL advantage of Magnolia Flower's healing powers... 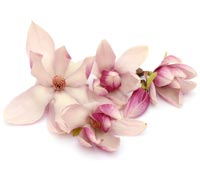 CHECK OUT my Online Course all about Magnolia Flower. Dive deep into the benefits and applications of Magnolia Flower from Eastern and Western perspectives and much, much more!

Magnolia is an ancient genus, appearing before bees did. It is theorized that the flowers evolved to encourage pollination by beetles. Fossilized specimens of M. acuminata have been found dating to 20 million years ago, surviving many geological events from the ice age, mountain formations, and continental drift. Another ancestral aspect of the genus is its flower bud which is enclosed by a bract instead of sepals. The flower buds are collected in early spring before the flowers blossom.

Caution: Considered safe used in recommended doses. Overly high dosing could cause vertigo or headaches. It is not recommended for pregnant women. Some people may develop an allergic rash when magnolia is applied to the skin.

History/Folklore: Magnolia flowers have been used in Chinese Medicine since 100AD. Currently there are more than 200 Chinese patent drugs that are based on magnolia flowers. The plant compounds magnolol and honokiol are credited with much of the efficacy of this herb.

Magnolias have been cultivated in Chinese Buddhist temple gardens since 600 AD. Spiritually, they are a reminder of independent and impartial thinking and a sign of purity and gentleness.

In Traditional Chinese Medicine, magnolia is often used to treat a stifling sensation in the chest or stomach due to an upset between the Liver and Stomach Systems. The buds are considered a good gynecology medicine. They can also be applied directly to the gums to treat toothaches. Magnolia’s fragrance is said to awaken the Spleen’s function to Distribute and Penetrate Dampness.

A popular tea in China is called Yunlan, it is made by steeping magnolia petals (M. denudata) in boiling water.

Rubbed on the skin, magnolia flower/bud extract is used to whiten skin tone, improve skin elasticity, and counter the signs of aging. For these reasons magnolia bud extract is used in skincare products. It is also added to minimize possible skin irritation caused by other ingredients included in a product.

The compounds magnolol and honokiol found in the bark and plant as a whole, have been found to be 1000 times more potent than vitamin E. Vitamin E is a powerful antioxidant that is also beneficial to the skin. These two active compounds are thought to contribute to the primary anti-stress and cortisol-balancing effects of the plant. Both these compounds also exhibit neurotropic effects in vitro, promoting brain cell growth and reducing brain cell death. Magnolol, also contains anti-allergic and anti-asthmatic properties.

A study compared the compound honokiol to the pharmaceutical drug diazepam (Valium). Honokiol was found to be 5 times stronger for reducing stress and without the side effects. Unlike diazepam, magnolia does not also induce muscle relaxation, invite addiction, or cause memory loss that is sometimes associated with this drug.

In ancient China, magnolias were thought to be the perfect symbol of womanly beauty and gentleness. They are a symbol of dignity and nobility. The pink magnolia blossom symbolizes joy, health, and good fortune.

In the American South, magnolia blossoms are commonly used in bridal bouquets as they are said to reflect the bride’s purity and elegant grace.

Magnolia trees first appeared some 95 million years ago. And while their flowers are not representative of what the earliest flowers look liked, they offer interesting insights into the evolution of flowers. Magnolia is an ancient genus, appearing before bees did. It is theorized that the flowers evolved to encourage pollination by beetles.

The flower’s name in Japanese translates to “peaceful and harmonious flower.”

In China, the magnolia blossom symbolizes a beautiful woman. In the Tang Dynasty, it was also regarded as a symbol of purity and sweetness and was planted on the grounds of the Emperor’s palace. It also represents endurance and long life.

Magnolia is the official flower of Shanghai.

How to use Magnolia Flower (Hou Po Hua, Xin Yi) and take FULL advantage of it's healing powers!