Chinese legends claim that a Taoist monk lived to be 252 years old by including lycium berries in his daily tonic. Famous for aiding a long, healthy life and longevity, lycium is also known as an excellent blood tonic.

Watch a short video, from Ann Christensen, Founder and Creator of White Rabbit Institute of Healing™ – When you are feeling empty…

Below is an overview of Lycium/Goji Berry, combining the best of Western Science, Oriental Medicine, Traditional Chinese Medicine (TCM), Shamanism, Folklore, and a wide range of healing modalities. Gain a balanced and thorough understanding of the healing properties of Lycium/Goji Berry.

How to take FULL advantage of Lycium/Goji Berry's healing powers! 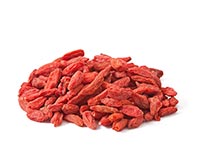 Lycium is a genus of plants in the nightshade Solanaceae family. There are about 70-80 different species. It is a thorny shrub with small, narrow and fleshy leaves that are alternately arranged. They have funnel or bell-shaped flowers that are white, green or purple in color. The berries are red, orange or black with a few seeds or many. Most lycium species are monoecious, producing bisexual flowers.

Lycium grows in most places around the world where temperate and subtropical climates occur. South America has the most species. The Chinese species, L. chinese, is native to China.

Parts Most Frequently Used: Berry, Root Bark, but also the Leaf and Flower can also be used.

History/Folklore: Lycium, commonly called Goji in China, has been used by European herbalists since ancient times and was traded from the Far East by Romans. Pliny the Elder of Ancient Rome, describes boxthorn (lycium) as a medicinal plant used to treat sore eyes and inflammation. In the biblical Book of Proverbs, boxthorn is said to, “beset the path of the wicked.”

The herb was originally recorded for medicinal purposes in China in the Book of Songs, giving it more than 3,000 years of history. It has long been classified as one of the fundamental herbs in Chinese Medicine.

The Chinese character “gou” also relates to “dog” or “wolf,” hence the plant is also called “wolfberry.” In Southern China, wolves were viewed as bad omens, but in Northern China they were considered sacred and the image was often used on weapons, amulets and furniture. The wolf was considered to be a symbol of manhood, courage, teamwork and strength, all characteristics associated with the healing powers of lycium.

In Traditional Chinese Medicine, lycium has long been used to treat male infertility. It is famous as a Liver and Blood (Xue) tonic. The herb increases vitality and brightens the eyes, especially improving night vision. They are known to calm the heart and nervous system as well as strengthen the legs, as they improve blood circulation. The berries also help cells to absorb more nutrients from the system.

Lycium roots are used to cool hot blood, thereby lowering fevers, improving irritability and sweating. The roots are also used in China to help treat people suffering from hypertension. The roots can be harvested at any time of year, but generally they are harvested in the spring.

Good quality lycium berries are bright red, tender and sweet. If they have turned brown or brownish-red, are dried up or are not sweet, they are too old.

A combination of lycium and schizandra is one of China’s most famous tonics. In folk medicine, 10g of this herb can be steamed and taken 2-3 times daily to treat wasting and thirsting disorder. Many people will squeeze the juice out of the lycium berries using this concentrated liquid as a drink.

Lycium contains Lycium barbarum polysaccharides (LBPs), that are considered to be the plants active anti-aging compounds. These compounds, in conjunction with the plant’s other constituents, collectively contain a variety of pharmacological functions including immunoregulative, anti-apoptotic activities, and reducing DNA damage that can help to counter the impact of aging. The LBPs, found in Lycium, are natural amino acids that help counter oxidative stress and aid immune system function.

Lycium berries contain some of the highest levels of beta-carotene found in edible plants.

As lycium is neither hot nor cold, it can be used to treat both hot and cold conditions without further exasperating either condition.

The Chinese tonic, Fructus Lycii (Gou Qi Zi), is made from the fruit of several species of lycium and is used as a supplement, to especially treat the eyes.

Tree of the Jews

In the Muslim text, Sahih Muslim, lycium is described as “the tree of the Jews,” as the plant hid Jews running from persecution.

In China, it is said that lycium brightens the spirit.

How to use Lycium/Goji Berry to take FULL advantage of it's healing powers!