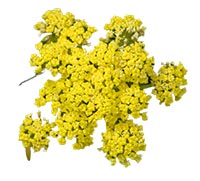 Lomatium is considered a highly effective antimicrobial with a variety of uses. The key is proper identification so as not to confuse it with other similar plants of the same family or the very poisonous hemlock parsley, which is a similar looking plant in the same family of plants. Some species are edible, this variety is famous for treating a wide variety of lung infections including pneumonia and influenza.

Below is an overview of Lomatium, combining and interpreting the best of Western Science, Traditional Chinese Medicine (TCM), Shamanism, Folklore and more. Gain a balanced and thorough understanding of the healing properties of Lomatium.

Lomatium is in the Parsley family. They are a genus of 70-80 perennial herbs in the family Apiaceae. The plant is similar looking to other umbel-shaped flowers in the Apiacea family such as carrots, parsley, dill, or celery. L dissectum has basal leaves which are finely divided, like a carrot plant or fern. Flowers may be red or yellow and can stand 2-3 feet tall. There are approximately 900 seeds per flower umbel each year.

Native to Western North America. Lomatium grows in the semi-arid climates of the Great Basin and Northwest America, particularly on steep rocky hillsides where there is little competition from other plants, volcanic soils and decomposed granite. Dry sandy soils, as a rule under or between tall sagebrush or greasewood. It grows from British Columbia to the Rockies, to Arizona and into Western California.

Caution: Some plants in the Apiaceae family are poisonous. Be sure about identification.

History/Folklore: Lomatium dissectum is the species most used for its medicinal properties. None of the other species of lomatiums are as universally considered a medicinal herb as is the varietal.  It is quickly becoming extinct in the wild due to wildfires, grazing and over harvesting. The species L. cous, L, geyeri, L. macrocarpum are often called “Biscuit Root” as they have starchy edible roots long used by Native American Indians as a food.

Lomatium typically grows in dry, rocky, often steep habitats, while the other similar hybrids and hemlock parsley prefer moist, deep soils in order to survive. So if the plant is growing in moist soil leave it alone as it is likely highly poisonous! If the soil is dry and void of most organic soil qualities then it is more likely to be Lomatium.

Four year old plants can have roots that are up to 1 foot long and are still a long way from being harvestable for the preferred roots that will grow to be as large as 3-6 inches around and up to 2 feet long. Older roots can frequently weigh up to 2-6 lbs. Lomatium is considered a rare species of the parsley family.

The plant’s large taproot and kinship with the common carrot gave it its name of “Indian carrot.” It is gathered in the late Fall, with November especially considered to be the proper month for harvesting.

A pound of the root is considered to be a proper dose for treating a case of fever for three days, such as is common with influenza or in cases of pulmonary disease.

In large doses it is a laxative, in extreme does it is emetic. It is both a stimulating and a sedating expectorant, so it can be used for either purpose.

Lomatium can be used externally as wash for smallpox, skin rashes and cuts and sores.

Traditional Native Americans used the starchy edible root as a dietary staple. It was eaten cooked, dried or ground into flour for cakes that could be stored and eaten later. It was used so successfully as a medicine by the Washoe Indians during the influenza epidemic that hit their area in 1918 that it became noticed by the western medical community. Unlike other patients receiving other kinds of treatments, the Native American Indians using lomatium recovered from the influenza while others did not. The plant was one of the most important herbs for the Native Americans of the Pacific Northwest.

It is said to have the biting odor of balsamic resins. So far, transplanting the root has not been successful. Lomatium is considered a rare species of the parsley family. Due to grazing, wildfires and over harvesting it is becoming an endangered plant as it is mainly a wild-crafted herb. Please harvest with care and respect, being sure to leave plenty of living plants untouched for future generations.

The plant’s volatile oil is one of its principal therapeutic agents and can be lost in making decoctions, so some prefer to prepare it as a powder.

Lomatium is not native to China and is therefore not considered a Traditional Chinese Medicinal herb. Modern TCM herbal practitioners however, are happy to incorporate it into their selections of top herbs used for treating infectious lung conditions.

Glucosides, resembles a Balsam as it contains an Oleogumresin and an Acid because of its Alkaloids and Gulcosides. The Volatile oil is one of its principal therapeutic agents and is lost in making decoctions.

Tastes a bit like celery, parsnip, or stale biscuits.

Lomatium is regarded today as a strong antimicrobial, expectorant, and antiviral medicine.