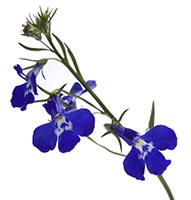 Lobelia is a powerful herb. Too much can be toxic. The right amount, however, treats chest pain, acute heart failure, tonsillitis, and even aids a difficult or painful birth. Lobelia has anti-inflammatory and antispasmodic properties. It also helps promote urination. In Traditional Chinese Medicine, it is considered one of the famous “50 Fundamental Herbs” and has been used for centuries to treat a wide variety of conditions from heart problems to colds to snake bites.

Below is an overview of Lobelia, combining and interpreting the best of Western Science, Traditional Chinese Medicine (TCM), Shamanism, Folklore and more. Gain a balanced and thorough understanding of the healing properties of Lobelia.

Also Known As: Half Edged Lily

Lobelia is a perennial plant with five sepals and five petals fused zygomorphically. Five stamens are fused by their lower parts and five carpes are fused inferiorly. The plant has blue to light violet flowers. It can grow to be 3-6 feet tall. It blooms from May – October. There are some 360-400 different species.

Caution: Many adverse effects limit the use of lobelia. Because of its similarity to nicotine it may be dangerous to certain populations (children, pregnant women, those with cardiac disease) Excessive use can cause vomiting or nausea. The chemical alkaloid compound lobeline may cause dizziness. All parts of the plant are considered poisonous/toxic if eaten in large quantities and can cause exhaustion, dilated pupils, convulsions and coma.

History/Folklore: In China it is considered to be one of the “fifty fundamental herbs” in TCM. The Chinese use it successfully to treat end-stage schistosomiasis (infection due to parasites from worms) and end-stage cirrhosis of the liver.  As it balances circulation of Qi and Blood it is also good for treating acute heart failure and either high or low blood pressure.

In the west lobelia is being clinically tested as a treatment for multi-drug resistant tumor cells. Certain species (L. sihilitica, L. Erinus and L. cardinalis) have been used as a cure for syphilis.

The leaf used in tea form is good for treating colds, croup, and nosebleeds. As a purgative it helps induce vomiting and thereby eliminates harmful toxins from the body.

In the Victorian language of flowers lobelia symbolized malevolence and ill will.

Native Americans used it to treat respiratory difficulties, muscle disorders and as a purgative.

This herb was a mainstay of the system of herbal medicine introduced by Samuel Thomson, a famous self-taught American herbalist from the early 19th century, who has been called the “Father of American Herbalism.”

Lobeline, which can be modified to Lonelane is a compound that can decrease methamphetamine in rats, making this compound a possible treatment for meth drug dependency. The seeds contain the highest amounts of lobeline, more than any other part of the plant.

A tincture of the whole plant is said to help treat paralysis of the lungs and tongue.

Native Americans used to smoke the dried leaves and as Lobeline has a similar chemical makeup as nicotine, the plants are sometimes commonly called “Indian Tobacco.” The Iroquois used the root to treat leg sores, venereal diseases (often combined with cherry bark) and ulcers. It was also used to discourage the presence of gnats. The Crow Tribe used it in religious ceremonies. The plant was so valued that some tribes used it as an article of trade.

Often used as good ornamental plant in the garden as it attracts hummingbirds and butterflies.

The color of the herb in commercial packaging will be yellowish green with an irritating odor and a taste similar to tobacco, that can burn and cause the flow of salvia.

Due to the plant’s possible toxicity a dosage of 0.9ml every hour in tincture or extract is the recommended dose for treating spasms. (0.13-0.5grams)

Lobelia roots that are finely ground and placed in food are said to be an aphrodisiac.