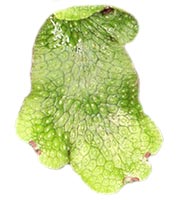 Liverworts are some of the oldest plants on the earth. They arose as green algae was making its transition onto land some 400 million years ago! This is long before flowering plants, mosses and ferns appeared. They are often called the “simplest true plants.” Because its leaves also look like tiny livers, hepatica (hapatica noblis) is often confused with and called liverwort, even though it is a perennial flowering plant.

Below is an overview of Liverwort, combining and interpreting the best of Western Science, Traditional Chinese Medicine (TCM), Shamanism, Folklore and more. Gain a balanced and thorough understanding of the healing properties of Liverwort.

The Marchantiophyta are a division of non-vascular, bryophyte, land plants, commonly referred to as liverworts and hepatics. They have a gametophyte-dominant life cycle, with cells of the plant carrying only a single set of genetic information. There are about 9,000 species of liverwort. Most species are leafless and look like flattened moss. Liverworts tend to vary from mosses by their leaves having no costa (ribs or veins that conduct water and that most mosses do have in their leaves). They also contain marginal cilia (very rare in mosses). Most produce a flattened, ribbon-like body.

Caution: Fresh liverwort is likely to be unsafe if ingested or applied to the skin. Dried liverwort is still being studied. Do not use if pregnant or nursing.

History/Folklore: Common liverwort (Marchantia polymorpha) is a ribbon liverwort that produces conspicuous, spore-forming structures that look like parasols in the spring and summer. It too is widespread in damp habitats and gardens. It has been believed that liverworts cured diseases of the liver, hence the name. The shape of a typical liverwort plant can look a bit like the shape of a liver, a visual relationship that would be in sync with the doctrine of signatures, which stated that “like treats like.”

Liverworts anchor themselves with rather primitive, one-cell appendages called rhizoids.

Liverworts help prevent erosion along stream banks, and some species are sold as plants for fish tanks and aquariums, providing habitat for small invertebrates and fish that feed on them.

In 2010, five different types of fossilized liverwort spores where found in Argentina.

Liverworts are the only group of land plants that do not have stomata, window-like structures on plant leaves that close when the leaf is threatened with drying out, so the whole plant will shrivel and dry if no water is available.

Liverwort is said to strengthen the nerves, stimulate metabolism and promote relaxation. Women use liverwort to ease symptoms of menopause.

Liverwort (M. polymorpha L.), is known to contain an abundance of anti-cancer compounds including marchantin A. The plant is continuing to be studied for its formidable antitumor and anticancer properties.

Liverwort has been used as a healing substance by tribal cultures for centuries to treat liver disorders, skin diseases, fight fevers, support heart health, and to heal wounds. Its long history as an ethnomedicine used uniquely by differing tirbal peoples from all around the world from Africa, to South America, to Australia, To China, To Nepal and India indicates the plants powerful physical and spiritual healing attributes.

In ancient times, the oil from the leaves was used by women to bring a shine to their hair.

Not to be confused with hepatica (h. noblis), a small perennial plant that is often commonly called “liverwort” because of the shape of the plant’s leaves.

Do Not Use Fresh

Fresh liverwort is likely to be unsafe so use dried liverwort. Its side effects are still being studied, so be careful!