Lion’s tail is known for its medicinal and mild psychoactive properties. It has traditionally been used by South Africans, the Chinese, and the Vietnamese for its euphoric effects. Medicinally, it has been used to treat tuberculosis, jaundice, high blood pressure, diabetes, and snake bites. South Africans, where the plant is native, also use the fresh juice of the stem as an infusion to purify the blood. The dried leaves and flowers have a mild calming effect when smoked. It is considered far less potent than Cannabis, and is not classified as a hallucinogenic. Do not confuse lion’s tail with motherwort, another plant that is sometimes commonly called lion’s tail.

Below is an overview of lion’s tail, combining the best of Western Science, Oriental Medicine, Traditional Chinese Medicine (TCM), Shamanism, Folklore, and a wide range of healing modalities. Gain a balanced and thorough understanding of the healing properties of lion’s tail.

How to take FULL advantage of Lion's Tail healing powers...

CHECK OUT my Online Course about Lion’s Tail. Dive deep into the benefits and applications of Fennel from Eastern and Western perspectives and much, much more!

Lion’s tail is a semi-evergreen, erect perennial shrub with beautiful orange flowers, that are thought to resemble a lion’s tail. It is a member of the mint Lamiaceae family. There are varieties that display white or yellow blooms. The plant blooms in late spring and into the fall. The flowers are tubular two-lipped fussy flowers that appear in tiered whorls around the top half of the long straight stems they grow on. The plant’s leaves are dark green and lance-shaped. The plant can grow to be 4 to 6 feet tall.

Lion’s tail is native to the damp grasslands of South Africa, but it now grows in many parts of the world where it is often classified as an invasive weed. It likes mild climates and can grow as an annual in regions with cold winters. It prefers warm and dry climates.

Caution: Considered safe, it can cause nausea, headaches, or dizziness in some people. Not recommended if you are pregnant.

History/Folklore: The leaves and flowers brewed as a tea are used to treat respiratory infections, fevers, headaches, high blood pressure, hepatitis, and liver stagnation. Externally the tea can be used to relieve pain and itching and as a compress for acne, eczema, snake bites, and scorpion stings.

The main psychoactive compound is said to be leonurine, however there are reports that this compound has yet to be found in this plant using chemical analysis. The name wild dagga, relates to an indigenous South African tribal name for cannabis dagga, however, no part of the plant is used as a hallucinogen. Similar to other members of the mint family, it does contain marrublin, a compound known for its antioxidant and cardioprotective properties. The compound significantly improves myocardial function.

In one study conducted to explore the plant’s anti-inflammatory and anti-diabetic properties it was found that lion’s tail contains properties that helped manage pain, arthritis, and other inflammatory conditions, including type-2 diabetes.

Other traditional African remedies using lion’s tail include using the herb to treat asthma, and depending on the dose to stimulate or suppress menstruation. The leaves and roots are used to make an extract or tea used for treating high blood pressure, colds, snake bites, bronchitis, and externally to treat eczema. In South Africa, the fresh stem juice is used as an infusion you drink to help purify the blood.

The dried leaves and flowers have a mild calming effect when smoked or chewed. It is considered far less potent than Cannabis, and is not classified as a hallucinogenic. The plant has traditionally been used by tribal peoples of South Africa at ceremonial occasions to induce trance-like states along with drumming and dancing. Recreational users have reported that smoking the herb can cause nausea, dizziness, sweating, lightheadedness, mild euphoria, visual changes, and sedation. It has been used as an alternative to tobacco and illegal psychoactive plants such as Cannabis. It provides a short-lasting positive feeling. The resin from the flowers and leaves can also be rubbed off and smoked alone or with other herbs.

It was known in Africa, that the Hottentot tribe and the Bushmen smoked the buds and dried leaves, giving rise to one of the plant’s common names, Hottentot Tobacco. A tea can be made from the dried flower petals, but it is not a pleasant tasting tea, rather it is purely medicinal!.

The family Leonurus contains several varieties of plants that while in the same family, have different properties and should not be confused with our plant Leonotis leonurus/Lion’s tail (aka Wild Dagga) which is a perennial plant used as a medicine especially noted for its calming and euphoric properties.

The plant attracts sunbirds, hummingbirds, and butterflies. Sunbirds have evolved curved bills well-suited to feeding from the tubular flowers. 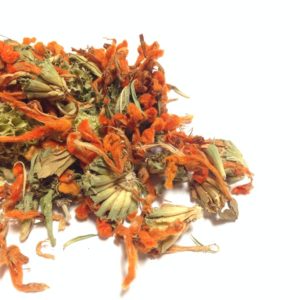 Lion’s tail is a member of the mint family of plants. It is native to South Africa.

Taken as a tea, lion’s tail is used to treat colds and fevers. Used as a wash it helps ease the itching associated with skin rashes such as eczema.

Lion’s tail is known to provide mild feelings of euphoria when either the buds or dried leaves are smoked. Some cultures have used it as a substitute for marijuana, though its effects are notably milder and more short-lived.

How to use Lion’s Tail (Kuang Ye De Da Jia) and take FULL advantage of it's healing powers!