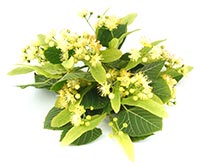 The linden tree is said to be the national symbol of Slovenia. In Salvic mythology the tree is sacred and many villages are named for it. German towns often have a linden tree growing in their centers as protection and to provide shade. The plants are famous for their wood, sweet scents, and ability to treat colds and nervous disorders.

Below is an overview of Linden, combining and interpreting the best of Western Science, Traditional Chinese Medicine (TCM), Shamanism, Folklore and more. Gain a balanced and thorough understanding of the healing properties of Linden.

Linden trees are a species of Tilia, or lime trees. They are deciduous trees that can grow to be 90 feet tall and live to be over a thousand years old. T. cordata is the small leafed European Linden that is also called the Winter Linden and T. platyphylos is the large leafed linden that is also called the Summer Linden. The leaves of all linden trees are heart-shaped, mostly asymmetrical and with tiny fruit that look like peas. It has yellowish flowers.

Linden trees like temperate climates. It is found in both Europe and North America.

History/Folklore: The flowers of linden trees have been used to treat anxiety and nervous disorders.  The flowers were steeped in teas to help with upset stomachs, palpations and even vomiting that can be associated with stress and anxiety.

Interestingly, one of the old Celtic legends states that if you sit under a linden tree you will be cured of epilepsy. In Roman and German folklore the linden tree is considered the “Tree of Lovers.”

In Slovenia, there are linden trees that have grown to be over 700 years old.  They were often planted to mark places where meetings or celebrations would be held in the shade of the great trees. To this day, a linden tree is planted to mark a special occasion.  Locally, they are often called “Turkish linden trees” as they were used to mark the locations where battles were won against the Turks.  Linden tree avenue, also called Napoleon’s avenue, comprises 290 trees, was planted in 1810 to mark the wedding of Napoleon to the Austrian Princess, Marie Louise.  It is protected as a horticultural monument.

The dried flowers are sticky and the fruit is somewhat sweet and slimy. Linden trees attract aphids that are farmed by ants for the production of a sap that the ants use and that can drop a thin sticky film or syrup, sometimes called “honeydew”, onto cars left parked underneath the linden trees branches. The ants and aphids do not harm the tree.

The tea has a pleasant taste due to the volatile oils found in the flowers.

The trees are also valued for their wood, charcoal and the honey made from their flowers. The wood is soft and easily worked.

It was used by old Germanic tribes to make shields with intricate designs carved into them. The Germans also used the wood to carve many intricate altarpieces. The wood is still used today to make puppets.  Acoustically, the wood is used for electric guitars and drum shells to enhance their sound and aesthetics. Aquariums use the wood as a diffuser as air pumped through the grain of the wood produces very fine bubbles that are difficult to achieve by any other method.

In Japan the bark of the tree is used by the Ainu people to make fibers that are then use to make into clothing.

The leaves and young buds are edible raw.

Coughs and Colds Be Gone

Linden is still considered to be one of the best herbs for treating coughs and colds.

In Poland, the wood is said to guard against the evil eye and lightening.