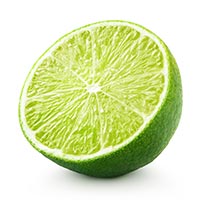 Only 11 calories per the juice of one lime and you will get 22% of your daily minimum requirement of vitamin C. Limes reduce the risk of obesity, diabetes and heart disease. They are antimicrobial. In West Africa, the addition of lime juice to the main meal of the day has proven to help prevent cholera outbreaks. Limes also contain constituents that are anticarcinogenic.

Below is an overview of Lime (Qing Ning), combining and interpreting the best of Western Science, Traditional Chinese Medicine (TCM), Shamanism, Folklore and more. Gain a balanced and thorough understanding of the healing properties of Lime (Qing Ning).

Limes are small round citrus fruits with green skin and flesh that grow on trees that seldom grow taller than 16-18 feet high. If they are not pruned they become shrublike. The trees branches are spread and are irregular, with short stiff twigs and small leaves and many small sharp thorns. The evergreen leaves are pale green. The tree’s flowers are small, white and typically grow in clusters.

Limes are believed to have originated in Southeast Asia. Wild limes probably originated in Indonesia. They like tropical and sub-tropical climates and now grow worldwide especially in Mexico, the United States and Mediterranean regions. Finger limes (C. australasica) are native to Australia.

History/Folklore: Studies have shown that lime juice and zest decrease the fatty streaks found in coronary arteries. These streaks are the indicators of the plaque buildup that leads to cardiovascular disease. The flavonoids found in limes help stop cell division in many cancer cells.

The limonins found in limes (lemons too!) are thought to contribute to their strength in preventing cancerous cell growth. They are highly anti-carcinogenic. Limonin is also being studied for its potential cholesterol-lowering effects.

Limes are acidic, but they also have an alkalizing effect on the body.

The Persian lime is the variety most often used in cooking. Key limes are smaller, rounder and more acidic. Key limes are not grown in Key West, Florida in the U.S. They are primarily grown in the subtropical regions of Mexico, India and Egypt.

Arab traders brought lime trees back with them from southeast Asia and introduced them to Egypt and North Africa around the 10th century. They were spread throughout Europe during the Crusades. Columbus brought them with him on his second voyage to the Caribbean. Limes remain an excellent fruit for preventing scurvy and were brought to the state of California in the U.S. during the gold rush for this very reason: to prevent scurvy. The English word, “limeys” derives from sailors using the fruit on long voyages to prevent scurvy.

In China, limes have been used to help draw out negative Qi (Energy) from your body and living spaces by lifting your body’s Qi (Energy), eliminating odors from rooms, and lifting your spirits during a time of stress or anxiety. You can create a wash of water and lime juice to cleanse yourself with. Add a few drops of essential oil to cleaning cloths to cleanse your home. Cleanse your aura from negative energies, including gossip or upsetting thoughts, by rolling a lime between your palms for several minutes and then tossing the lime into a flowing river to wash away the negative energy away. Take a foot bath with lime juice in warm water to remove obstacles and improve your luck.

Limes can be sweet or sour.

The Finger limes, native to Australia are noted for their discrete juice vesicles, called “lime caviar.”

Just 1 tsp. of lime zest contains only 1 calorie and 4% of your daily vitamin C requirement.

The risk of developing asthma is lower in people who consume high quantities of vitamin C. Limes are very high in vitamin C.

Pairing foods that are high in vitamin C with iron-rich foods increases the body’s ability to absorb the iron. (Add lime juice to your next spinach salad.)