Lady’s mantle is most commonly used today for its ability to treat a wide range of female reproductive disorders. It is especially useful for treating excessive bleeding from the womb from any cause as well as excessive discharges in general. It is also has a strong history for treating wounds, even wounds infected with gangrene and easing digestive disorders such as diarrhea, diabetes, edema, and stomach cramping. The dewdrops that collect on the tips of the plant’s leaves are considered to have mystical powers.

Lady’s mantle is a perennial herb, with over 300 known species. It is a member of the Rose Family Rosaceae. Its leaves have uniquely ruffled scalloped bluish green leaves that are finely toothed at the edges and covered with fine soft hairs and a slight waxy coating. The leaves are superhydrophobic, meaning highly water-repellent. It has flowering stalks, or racemes, that bear tiny star-like yellow-green flowers. The plant’s underground rhizomes spread, and tend to grow in clumps.

Lady’s mantle is native to western and central Europe, but is now grown in many parts of the world. 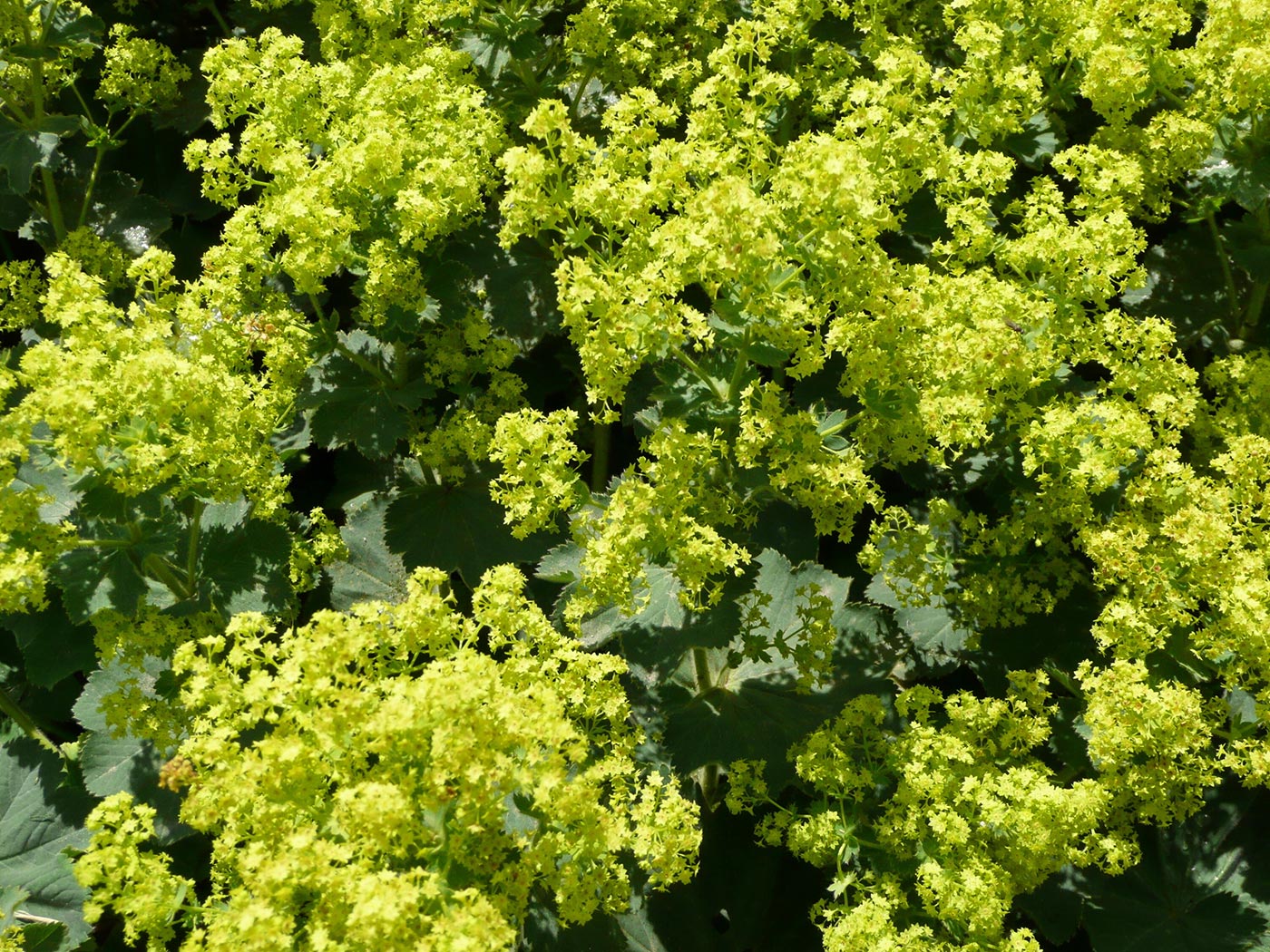 Lady’s mantle is a perennial herb, with over 300 known species. It is a member of the Rose Family Rosaceae. Its leaves have uniquely ruffled scalloped bluish green leaves that are finely toothed at the edges and covered with fine soft hairs and a slight waxy coating. The leaves are superhydrophobic, meaning highly water-repellent. It has flowering stalks, or racemes, that bear tiny star-like yellow-green flowers. The plant’s underground rhizomes spread, and tend to grow in clumps.

Lady’s mantle is native to western and central Europe, but is now grown in many parts of the world.

History/Folklore: Lady’s mantle is best known today for its ability to treat female disorders over the entire course of a women’s reproductive life from mensis, to pregnancy, to menopause. It can help stop excessive bleeding, irregular menstrual bleeding, promote menstrual bleeding, ease menstrual cramping, and treat vaginal discharge. It is useful for treating hot flashes and night sweats. It can help treat fibroids and infertility.

Lady’s mantles astringing properties make it useful for treating abdominal tissues that are continuing to sag post childbirth as well as sagging breasts post lactation. A tea used daily post childbirth can help tone and heal prolapse of the uterus or bladder. Sitting in a bath of lady’s mantle can help treat torn vaginal or rectal tears. It is thought to be useful for preventing miscarriage especially when the uterus is not sufficiently holding its tone.

Lady’s mantle has been shown to be useful for also helping to support a woman emotionally after a difficult birth, miscarriage, or abortion. Some have used the herb to help support victims of sexual abuse.

Typically it is the leaves that are most frequently used to make medicines. Traditionally the flowering stalks and roots were once used as well. The roots are considered to have a stronger astringing effect. It has been considered one of the best wound healing herbs available, even for treating wounds that have become infected with gangrene.

The 17th century English herbalists, Nicholas Culpeper describes lady’s mantle as, “very proper for inflamed wounds and to stay bleeding, vomitings, fluxes of all sorts, bruises by falls and ruptures. It is one of the most singular wound herbs and therefore highly prized and praised, used in all wounds inward and outward, to drink a decoction thereof and wash the wounds therewith, or dip tents therein and put them into the wounds which wonderfully drieth up all humidity of the sores and abateth all inflammations thereof. It quickly healeth green wounds, not suffering any corruption to remains behind and cureth old sores, though fistulous and hollow.”

Lady’s mantle is rich in tannins which are known for their binding and astrining properties. These properties support the plant’s long history as a wound healing herb. This strong astringing property will help to dry the tissue, draw it together for healing, and help stop bleeding. The herb is also used to treat swollen bleeding gums. The herb has been used as a mouthwash to treat mouth sores, ulcers, and sore throats.

In Sweden lady’s mantel was traditionally used to treat spasmodic or convulsive disorders.

Lady’s mantle has been used to heal perforated eardrums.

Lady’s mantle tea, made from the leaves is considered to be quite tasty, with a lovely green flavor. The German E Commission suggests an average daily dose of 5 to 10g. It is considered to be an herb that herbalists feel is made stronger not my increasing the dose, but by increasing the consistency of use. It is often prescribed at low doses, used frequently, and then slowly raising the dose to reach maximum efficacy. The roots, when used, are generally used fresh.

The herb is said to balance the salt/fluid ratio in our blood helping to maintain cell wall integrity.

It has been suggested that lady’s mantle may be useful for weight loss, however there is no evidence to support this claim other than the herb’s astringing properties that can help to reduce edema which in the short term can have the effect of a loss of water weight.

Lady’s mantle leaves are notable for catching early morning dew and retaining the moisture long into the day after the dew on other plants has long evaporated. This property made the plant especially appealing to early alchemists, who were in the search for the chemical that would turn any substance into gold or heal all illnesses. The botanical name Alchemilla derives from the Arabic word that means alchemy.

Lady’s mantle will support personal integrity and poise. The herb is said to promote longevity, and cultivate a strong relationship with the powerful female icons of child, matron, and crone. The dried herb has been placed under pillows to help promote sleep.

The leaves are popular with sheep and cattle, but they will not eat the leaves until the moisture and dew has dried from the leaves.

Lady’s mantle is popularly blended with angelica and raspberry leaf to make an effective tonic tea for the uterus.

The dew collected from lady’s mantle was used as a beauty lotion and as an ingredient in alchemical recipes for longevity.