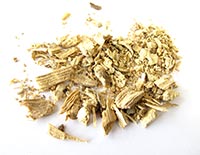 Kava root is made into a beverage or extract made from the Piper methysticum plant, native to the western Pacific islands. In the South Pacific, it is used during rituals and enjoyed as a popular social drink, similar to alcohol in Western societies. There are significant safety concerns associated with this herb as it may, especially when mixed with alcohol or when the leaves and stems are used instead of the root, cause significant liver damage. It continues to be used to ease anxiety, stress, and depression.

Kava is a tropical evergreen shrub in the Piperacea family of pepper plants. The shrub can grow to be six feet tall. It has heart-shaped leaves that can grow to be ten inches wide and it has woody stems. 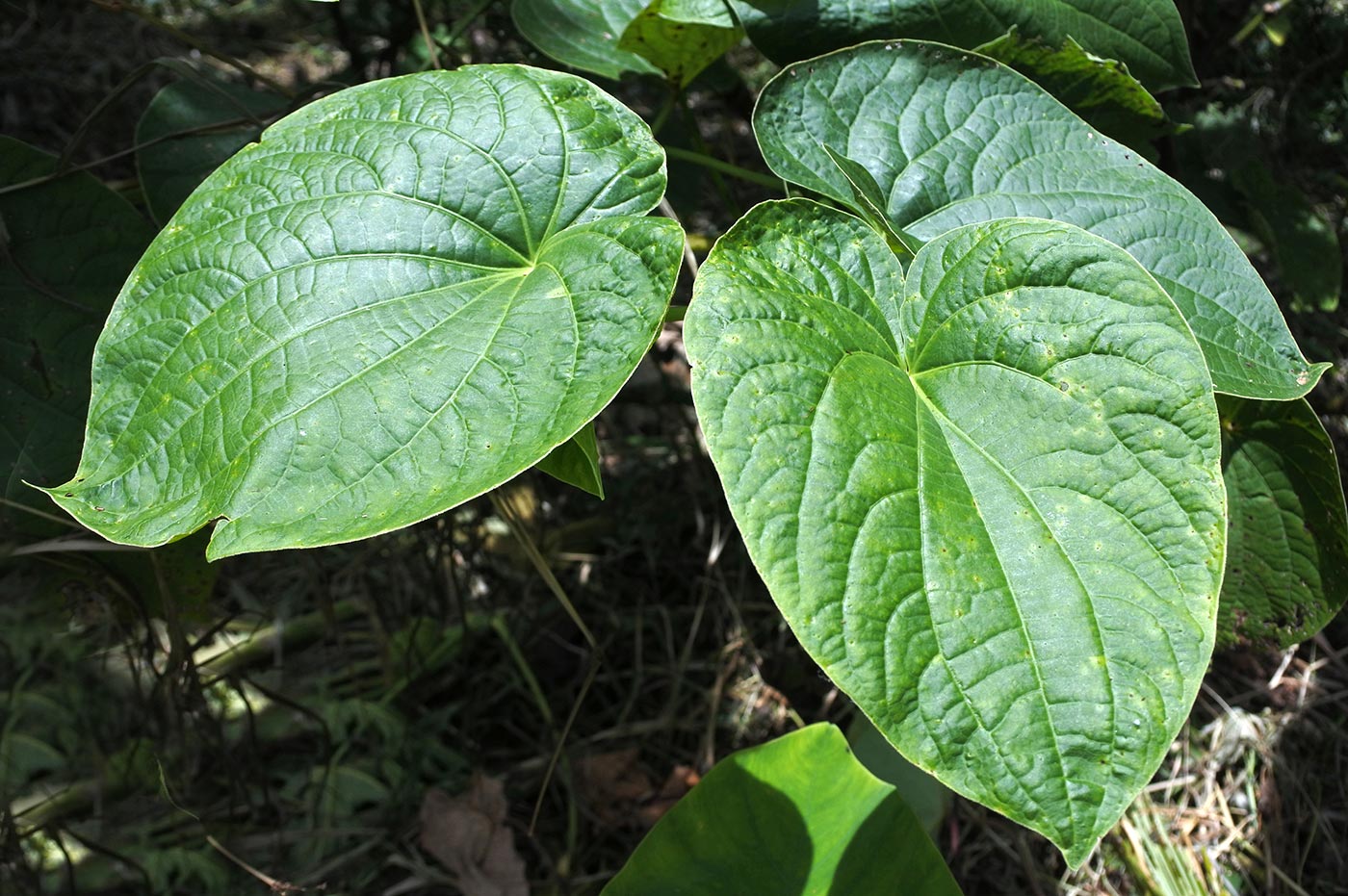 Kava is a tropical evergreen shrub in the Piperacea family of pepper plants. The shrub can grow to be six feet tall. It has heart-shaped leaves that can grow to be ten inches wide and it has woody stems.

Caution: The herb can be highly toxic to the liver even when used for short periods of time and in normal doses. It should never be taken with alcohol. Early symptoms of liver damage include, yellowed eyes and skin (jaundice), fatigue, and dark urine or blood in the urine. Never use the herb if you will be driving or operating heavy equipment. Do not use kava if pregnant or breastfeeding. Kava may make Parkinson’s disease worse. Kava affects the central nervous system, therefore it could increase the effects of anesthesia and other medications during and after surgery. Stop using kava at least two weeks prior to scheduled surgery. Leaves and stems are considered to more likely be toxic than the roots.

History/Folklore: Kava has a calming, euphoric effect that has made the herb popular for treating anxiety, depression, and insomnia associated with stress and anxiety. Kava is also showing potential as an anticancer treatment that blocks tumor growth and may have chemopreventive potential. It has been used to treat ADHD symptoms, epilepsy, psychosis, migraines, chronic fatigue and even colds, tuberculosis and other respiratory infections. It has been used as a urinary disinfectant, especially for treating gonorrhea.

The roots are ground into a paste. Traditionally this grinding was achieved by chewing the root and spitting it out. The grinding process is now accomplished by hand. The paste is mixed with water or coconut milk, strained and then consumed as a beverage or tea. It is a popular drink in the South Pacific.

The herb can be highly toxic to the liver even when used for short periods of time and in normal doses. It should never be taken with alcohol. Early symptoms of liver damage include, yellowed eyes and skin (jaundice), fatigue, and dark urine or blood in the urine. Kava root is sedating so do not use the herb if you will be driving or operating heavy equipment. There is speculation that the toxic effects are a result of not using the traditional method of chewing the root into a paste. Simply grinding the root may results in toxic effects. Using the leaves and stems instead of the root is known to be toxic to the liver. More research needs to be done to resolve the controversy. Use the herb in recommended doses only and be sure to check product labels to confirm you are using the root and not leaves and stems.

Kava is used in Germany, where it is used to treat bronchitis, rheumatism, gout, diarrhea, and genito-urinary inflammation.

Kava is said to produce a deep and dreamless sleep within half an hour. In Oriental medicine it can be classified as an herb that Nourishes the Heart and Calms Shen, helping to reduce palpitations, induce sleep, and calm anxiety. It is said when taking kava a person will talk softly, be calm, and become friendly.

The kavalactone compounds, found in kava, act on the nervous system with various degrees of sedative and numbing effects. For some, it is an alternative to using the drug Xanax. Studies suggest that these compounds help to reduce anxiety, protect neurons from damage, reduce the sensation of pain, and in studies done on mice, reduce the risk of cancer.

Compared to other plant species in the Piper family of plants (such as black pepper and other peppers), kava is less of a digestive aid but has stronger sedating, antiseptic, and analgesic properties.

In one study of 24 people, kava reduced the symptoms of stress and insomnia compared to a placebo.

Current research supports the use of kava to reduce the feelings of anxiety. A review of 11 studies concluded that kava extract was an effective treatment for anxiety and a viable alternative to antidepressants and certain anxiety drugs.

The name “kava” derives from the Polynesian word, “awa,” which means bitter, even though the herb is technically a spicy herb and not classified as a bitter herb in the way that other species in the Piper family of peppers are. In the South Pacific, kava root is a popular social drink, similar to alcohol in Western societies. The herb is used in ceremonies to promote relaxation, male bonding, and as an alternative to alcohol. It has been used for thousands of years by the Melanesian societies at weddings, births, deaths, and meetings of village elders. Kava has also been traditionally used to minimize the pain of tattooing and eye infections.

Kava used for three weeks at a dose of 250mg kavalactones per day, given as five supplemental tablets daily, was found to be effective for improving anxiety and depression in 60 adults participating in a study for patients suffering from Generalized Anxiety Disorder.

If a single capsule contains 100mg of kava root extract and is standardized at 30% kavalactones, then the capsule contains 30mg of kavalactones. Experts recommend up to 250mg of kavalactones per daily dose and no more. Typical commercial extracts contain between 30-75% kavalactones. In order to save money some companies have made use of the plant’s stems or leaves, which are known to harm the liver. Be sure to read labels and make sure you are using kava root, while the roots may still cause harm to the liver, especially if taken with alcohol, the roots are safer than the leaves and stems. Kava root has been used for centuries in the South Pacific where it is considered a safe and popular drink.

Kava is often compared, or confused with kratom. They are two different plants with similar properties. Both are from Southeastern Asia. Kava comes from the root of its plant, and kratom comes from the leaves of its plant. Confusion can arise as kratom is often made into a tea called kava or kratom tea. The two are sometimes used together to increase their potency. Kava root is mild intoxicating, lifts mood, eases anxiety and stimulates GABA and dopamine receptors. Kratom leaves are stimulating in small doses and sedating in high doses. Kratom is calming, stimulates mu and delta opioid receptors, and influences serotonin and norepinephrine receptors.

Kavalactones (which are Pyrone derivatives and include Kawain and Yangonin), Starch, Fiber, Proteins, Minerals.

A cup of kava tea can make your lips and tongue numb. It will relax your muscles and can calm anxiety.

Kava and kratom are similar herbs with many of the same effects. They both support relaxation. Kratom is better known for its energy boosting properties and its abilities to calm the mind. Kava is best known for its intoxicating and euphoric properties. Check your labels to be sure what you are taking.

Experts recommend a daily dose of kavalactones, the active compounds found in kava, of not more than 250mg.