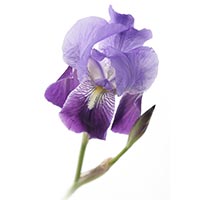 Iris cultivation has produced many varieties of species. It is the Flag Irises that are known for their medicinal properties. They are also known as a blood and liver cleansing herb that has been used as a cure-all by Native Americans for centuries.

Below is an overview of Iris, combining and interpreting the best of Western Science, Traditional Chinese Medicine (TCM), Shamanism, Folklore and more. Gain a balanced and thorough understanding of the healing properties of Iris.

The leaves are slender and lance-shaped emerging from a dense upright root stock that can grow up to four feet in expanding clusters. The roots grow into large clusters. It is a perennial herb that grows in shallow water, at the edge of ponds, marshes and swamps.

Caution: Do not use while pregnant.

History/Folklore: Iris is named after the rainbow goddess, “Iris” because of the variety of the colors in the flower’s genus. Iris is a symbol of power and majesty. The three leaves of the blossom are seen in Egyptian iconography on the Sphinx as the symbol for faith, wisdom, and valor.

In ancient Greece and Rome irises in the form of “Orris Root” (a combination of I. germanica, I. pallida and I. florentina) were used largely in the making of perfumes. Orris Root is rarely used today in medicine in the way that the American varietal I. veriscolor is used.

Orris Root was mixed wit h anise in England as a perfume for linens in the wardrobe of King Edward IV (1480). The powdered roots are still used for washing linens with to add a refreshing and clean fragrance to them.

The Russians used the roots to flavor a drink commonly made from honey and ginger.

French monarchs have used the image of the iris as their insignia known as the fleur-de-lis.

The German species, I. germanica, is well-known as a powerful cathartic, and hence its ability to treat dropsy. The fresh roots have an earthy scent, similar to violets that can, over time, become stronger and stronger smelling. The flower is is also called “Blue Flower de Luce.”

Native Americans used the herb as a cure-all. There is evidence that some tribes grew irises near their villages in order to keep the herb handy for medicinal uses. They even used it as a poultice to heal sores and bruises. North American tribes believed the scent of the herb protected against rattlesnakes. If the scent of the root was kept on your hands and clothes rattlesnakes would not bite you and the roots were rubbed onto their teeth and chewed so that rattlesnakes could be held within their teeth during ceremonies without getting bitten while the scent endured.

The Chinese make use of I. pallasii and I. japonicae. Hu Die Hua (I. japonicae) is used to relax the bowels and aid constipation.

The chief economic use for irises is the cultivation of Orris Root (Rhizoma Iridis) which is derived from I. germanica, I. pallida, and I. florentina and is used in perfume. The three varieties are so similar to one another that they are not easily distinguished from one another.

The American varietal, I. veriscolor, is used in western pharmacology for the making of western drugs.

The larger and finer roots of irises are often turned into rosary beads used for counting prayers.