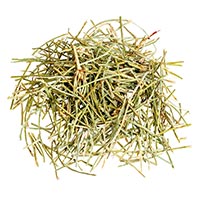 Considered a mild herb, horsetail is good for preventing osteoporosis and aiding the growth of collagen. Recent studies show that it is helpful for treating bed-wetting, incontinence, and urinary tract infections. It has a long history for treating ulcerations, reducing internal or external inflammations and stopping bleeding. The Chinese have long used it to treat a wide variety of eye disorders.

Below is an overview of Horsetail, combining and interpreting the best of Western Science, Traditional Chinese Medicine (TCM), Shamanism, Folklore and more. Gain a balanced and thorough understanding of the healing properties of Horsetail.

Horsetail is produced by spores rather than seeds. It is a perennial plant that can be either herbaceous, dying back in the winter or it can be an evergreen as is the case in most tropical species. It can grow to be up to 8m or more, with most plants growing to be  0.2-1.5m in height.  The leaves are greatly reduced containing a single, non-branching vascular trace, which is the defining feature of microphylis plants. The leaves will grow in whorls fused into nodal sheaths. The stems are hollow, jointed and ridged. It will bear a terminal cone-like catkin consisting of numerous closely packed peltae containing microscopic spores.

The only place horsetail is not found is in Antartica. Most plants prefer wet sandy soils, though it can be semi-aquatic.

Parts Most Frequently Used: Barren stems only. (Barren stems will appear after the fruiting stems have died down. Used entirely, they are cut off just at the root.) Ashes of the plant also used.

Caution: Careful if pregnant, or if fluids are depleted as long term use could be harsh on the kidneys.

History/Folklore: The Latin “Equisetum” is derived from the two words, “Equus” and “Seta” meaning horse and tail respectively as the plant’s branches somewhat resemble the tail of a horse. Over two hundred millennia ago the plant was taller and resembled a tree. Other than their size the plant has changed very little over all these years. It is a potent, versatile and gentle herb. It is rarely cultivated as it is highly invasive and difficult to eradicate once introduced.

Ancient Romans ate horsetail also making it into a tea and thickening powder.

Native Americans ate the young shoots raw, using the leaves as a dye that produced a soft green color.

Horsetail extract is often used as a supplement for silica. It has one of the highest concentrations of silica in the plant kingdom. It contains so much silica, that it is strong enough to become brush like and has been used to clean milk buckets and even to polish metal (hence its common name pewterwort).

Horsetail is used to analyze gold concentrations due to the plant’s ability to take up the metal when it is in solution.

The plants presence is said to indicate subterranean water flows or springs. Like alfalfa, horsetail is able to absorb unique minerals from the earth (i.e. silica) that are not found in many other plants.

The dried herb, powdered and taken three to four times a day is said to help with spitting up of blood. The ash of the burnt plant can be used for stomach acid issues, dispepsia, etc. as it is considered both cooling and astringing.

A decoction applied externally will stop bleeding wounds and helping to quickly heal them, it can also be used to reduce swelling of the eyelids.

Culpepper, the 17th century herbalist, said… “[Horsetail] is very powerful to stop bleeding in or outward… including ulcers and inflammations.”

The young fertile plants are cooked and eaten in Japan.

Stalks arise from rhizomes that are deep underground and almost impossible to dig out. It is often considered a noxious weed.

If eaten in large quantities, horsetail can be poisonous to grazing animals.

In China, horsetail was traditionally used primarily to treat a wide variety of eye disorders, hence the Chinese common name of “Eyes of Fire.” Now, it is also used to treat a wide variety of other ailments that include bleeding stools, colds, psoriasis and more. A common recipe used in China to tone the skin was simply to chop several stems, that are not in bloom yet, add 2 pints of water, 1 tablespoon of honey and simmer for about 20 minutes. Applied to the skin it will help shrink enlarged facial pores.

Horsetails are living fossils as they have been living on this planet for one hundred million years. The nearest plant affinity is the fern.

In Japan, horsetail is boiled and then dried to be used in the final polishing process on woodcraft as it can produce a smoother finish than any sandpaper.

Used externally, horsetail is popular to promote hair and skin growth, or as a gargle for sore throats.