Horehound (aka Marrubium) has been used for centuries as a natural remedy for a wide range of respiratory conditions. It is a popular ingredient in commercial cough syrups and lozenges. There are two types of horehound, white and black. They are related but different plants. White horehound is commonly just called horehound and the black variety (Ballota nigra) is called black horehound. They have some similar properties, but black horehound has a very bitter taste, while white horehound is minty with menthol qualities and is often used to make candies. White horehound also has a long history for being used for its antispasmodic properties. It has been used to treat seizures, tremors, and cramping, including menstrual cramping.

Horehound is a perennial plant and a member of the mint family Lamiaceae. There are two types, white and black. White horehound is commonly just called horehound. Its leaves are green and white and crinkled with soft fine hairs. Its small white flowers are densely packed and bloom around the stems where the pairs of leaves are attached.

Horehound is native to Asia and Europe. It is now naturalized in North America. While horehound can grow in many climates, it is said the best quality is grown in intense desert heat. 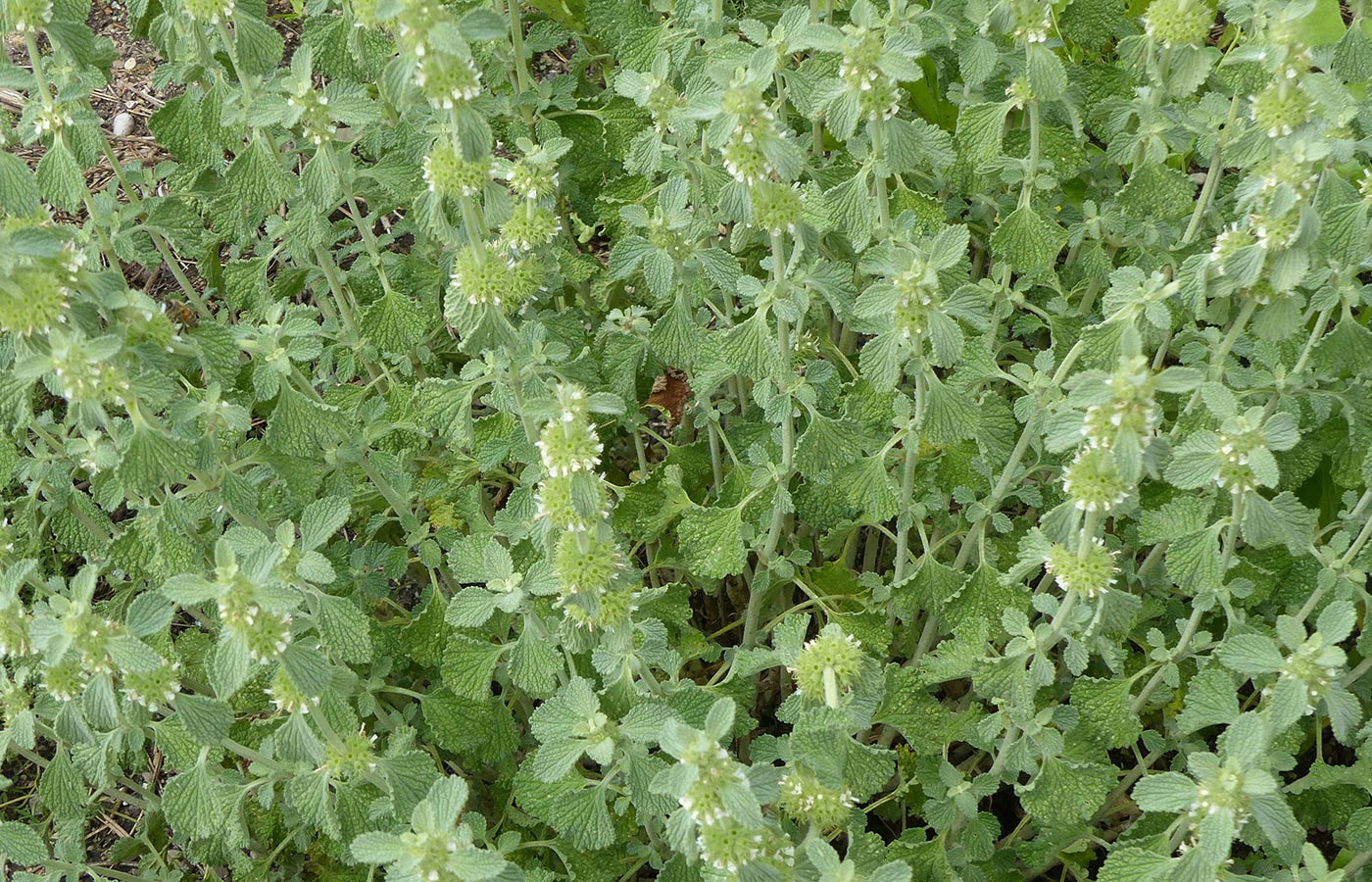 Horehound is a perennial plant and a member of the mint family Lamiaceae. There are two types, white and black. White horehound is commonly just called horehound. Its leaves are green and white and crinkled with soft fine hairs. Its small white flowers are densely packed and bloom around the stems where the pairs of leaves are attached.

Horehound is native to Asia and Europe. It is now naturalized in North America. While horehound can grow in many climates, it is said the best quality is grown in intense desert heat.

Caution: Considered safe. Use with caution. Horehound helps increase stomach acids that can aid digestion but may be too much for those already dealing with stomach ulcers or gastritis. Not recommended during pregnancy. (Black horehound is not recommended for people with Parkinson’s disease or schizophrenia.)

History/Folklore: The herb has been documented as a medicine dating all the way back to the 1st century B.C. Egyptian priests referred to the herb as “Seed of Horus”, which may be where its modern name, horehound derives from. The ancient Egyptians used the herb as an antidote for poison and legends say they also used the herb in ceremonial rituals. In medieval Europe it was used to ward off spells by witches.

The 16th century English herbalist, John Gerard, described the herb as an antidote to poison and a syrup for respiratory infections.

The 17th century English herbalist Culpeper said, “There is a syrup made of this plant which I would recommend as an excellent help to evacuate tough phlegm and cold rheum from the lungs of aged person, especially those who are asthmatic and short winded.”

A decoction of the roots were used by the Navajo as a healing herb for before and after childbirth.

In China, white horehound is especially used for its abilities to treat stubborn coughs and sinus congestion. A cooling herb it is effective for treating fevers, headaches, and the upward moving symptoms of colds and flu that affect the head, neck, and upper lungs.

For treating lung conditions, white horehound combines well with lobelia, coltsfoot, and mullein. Adding a bit of honey to your tea can help counter the herbs bitter flavor. The herb also combines well with marshmallow, licorice, and hyssop.

The constituent, marrubium, has been found to have notable healing impact on cancer, diabetes, and other health issues. White horehound extract has been shown to effectively prevent cell death and reduce the promotion of cancer in cells, in particular, colon cancer cells.

Used to aid digestion, a typical recommended dose is 3 to 4.5 grams of the dried herb or 2 to 4 tbsp of the pressed juice used daily. White horehound is known for increasing stomach acids that help aid digestion.

A study in the “Journal of Ethnopharmacology” found that black horehound (Ballota nigra) placed in the top 10 of 104 medicinal plants for its ability to inhibit the antibiotic resistant strain known as MRSA. White horehound also has powerful antibacterial and antimicrobial properties.

A study in “Oncology Reports” noted white horehound extract to be effective in promoting early cell death of cancer cells as well as aiding the prevention of inflammation that can lead to cancer. The herb showed particular promise in treating colon cancer.

The hoary or silver-colored hairs on the plant’s stems and leaves are the likely root of its name horehound. In old English, “har” and “hoary” mean “white” or “grey-haired”. The botanical name, Marrubium may have derived from the ancient Roman town “Mariaurbs” or from the name of one of the bitter herbs, “marrob” that is used by the Jewish peoples during Passover. Some suggest that the Egyptian god Horus could also be a source for the plant’s name.

Horehound is the bitter herb sometimes included in Passover meals.

One of the oldest uses of white horehound is to alleviate indigestion, particularly constipation. The herb helps eliminate an inflamed colon, reducing bloating and constipation.