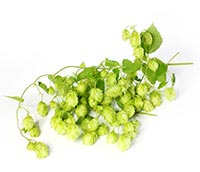 Besides beer, hops are best known for aiding sleep and being mildly sedating.

Below is an overview of Hops, combining and interpreting the best of Western Science, Traditional Chinese Medicine (TCM), Shamanism, Folklore and more. Gain a balanced and thorough understanding of the healing properties of Hops.

Hops are vigorous, climbing herbaceous perennials, trained to grow up strings when grown commercially. The “hop” is the green cone around the female flower of the hop plant. Botanically, hops are distant relative of stinging nettles and cannabis. The vines can grow up to 30 feet long.

74% of US hops grow in the state of Washington. Hops are believed to have originated in Egypt and spread to Asia and Europe.

Parts Most Frequently Used: Dried Flower, The Hop, (Cone and Grain of the Hop Flower)

History/Folklore: They are used primarily as a flavoring and stability agent in beer. They also have medicinal properties. Their antibacterial properties are effective in supporting the brewer’s yeast that is used during the production of beer. These properties help keep the beer from spoiling. The many different varieties of hops are one factor that lend hop beers their unique flavors and styles.

Inside the hops are golden grains that form a sticky greenish yellow powder.  Hops have been used for centuries to produce beer, even as far back as over 10,000 years in Asia, where it spread to Eastern Europe. Hops were introduced to England by the Dutch farmers. It is believed that hops originated in Egypt.

The Sumerian goddess Ninkasi was the goddess of brewing and beer. The Romans said that hops grew “wild among the willows, like wolves among sheep,” hence the name Lupulus (which is derived from the Latin word for wolf).

The ancient Hebrews used hops to help ward off the plague and in North America, the Native American Indians used hops to sleep, sooth toothaches, and improve digestion. These purposes did not catch on in Europe until more recently, as hops were mostly used to brew beer and not particularly used as medicines.

Hops are first mentioned in European writings in 1079 by the Abbess Hildegarde of St Ruprechtsberg, who recommended hops as the grain for brewing beer. As most beer was produced by monks during the Middle Ages, there are many records of hops and hop gardens in monastic writings.

Hops have a tradition of suppressing the libido, so teas made from hops were recommended to young male monks to help them remain chaste and celibate.

Hops tend to be unstable when exposed to light or air and lose their potency after a few months’ storage.

Hops are used in cosmetics for their calming and antioxidant properties.

80% of hop grains are a bitter resin.

Hops are used in a similar way as valerian as a treatment for anxiety, restlessness, and insomnia.

A pillow filled with hops is an old folk remedy for sleep disorders and research has shown it is actually effective.