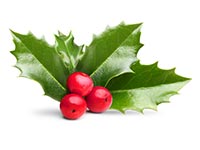 European legend says that holly sprang up under the footsteps of Christ, when he trod the earth. European holly is used to treat fevers and digestive problems. In China, the root of the species Illicis pubescentis is used to help treat heart problems, asthma, and skin infections. There are several different species of holly, but each exhibit similar properties even while sometimes they are each used a bit differently based on tradition and customs.

Below is an overview of Holly, combining and interpreting the best of Western Science, Traditional Chinese Medicine (TCM), Shamanism, Folklore and more. Gain a balanced and thorough understanding of the healing properties of Holly.

Holly is an evergreen tree that can grow up to fifty feet tall, some varieties do not have berries. Holly leaves are thick, glossy and edged with stout prickles. The leaves have no taste or odor. They remain attached to the trees for several years. The holly bears in the axil of leaves, crowded, small, whitish male and female flowers. The fertile flowers are succeeded by the familiar bright red berries.  The same tree rarely produces crops of flowers in the same season. Trees rarely bear berries if pruned and clipped a lot.

Caution: The plant is toxic, especially the berries, so it cannot be taken in large doses or for long periods of time. Not recommended during pregnancy.  If using Chinese holly root, be aware it may interact with heart medications such as Coumadin or Heparin, possibly causing excess bleeding.

History/Folklore: Holly grows very slowly. It is one of the most important evergreens in England, providing color in the winter with its red berries, food for birds, and used as Yuletide decorations. The old English Christmas Carols are full of allusions to holly.

The custom of using holly boughs for the holiday is said to have derived from the Roman custom of sending boughs with gifts to their friends during the festival of Saturnalia, celebrated at the end of December.

In ancient times holly wood was used to make spears with. The Native American Indians used a tea of the holly to stimulate the heart.

Legend says that holly sprang up under the footsteps of Christ, when He trod the earth, its thorny leaves and scarlet berries, like drops of blood, have been thought of as a symbol of His suffering and the reason the plant is sometimes called “Christ’s Thorn” or why it is also called “Holy Tree.” The holly tree has also been called the “Tree of Sacrifice.”

The red holly berries symbolize the life-giving blood of the Mother Goddess. The plant is considered a sign of personal sacrifice in order to gain something of greater value. Dreaming of holly is said to mean you will have a long life.

Pliny the Elder, describes holly under the name Auifolius, needle leaf, saying that if it is planted near a house or farm it will repel poison and defend against lightening and witchcraft. He said the flowers would cause water to freeze and if the wood was thrown at any animal, it would repel the animal, even if the wood did not touch them.

Holly leaves are known to have a calming effect on the heart, facilitating improved arterial function and blood circulation. The berries have been used as a purgative but as they are so highly purgative and toxic this use is rare and not recommended. The berries can cause vomiting and nausea. The leaves are the most frequently used part of the holly plant.

The theobromine found in the leaves is the constituent that contributes to the leaves having diaphoretic and febrifuge properties.

The holly root used in TCM (Illicis pubescentis) is grayish-brown with small fibrous roots that branch off it.  When harvested, the roots are stripped of their fibrous material and then dried and sliced into thin pieces. Typical dosage for the root is 30-60 grams and it is typically taken as a decoction in water.

Holly berries can be highly toxic when ingested, typically only the leaves are used medicinally.

The powdered leaves brewed in tea are used to treat measles, and the ashes from the leaves in a tea will sooth whooping cough.

Holly berries have been used to predict the weather. If there were lots of berries, it meant there would be a hard winter.