Hepatica has been used for centuries to treat ailments relating to the liver, kidneys, and gallbladder. This includes cirrhosis, jaundice, fatty liver disease, and hepatitis. It is also useful for treating respiratory ailments. Do not confuse it with liverwort (Bazzania trilobata, Marchantia polymorpha L.). Hepatica is also commonly called liverwort, due to its liver-shaped leaves. However, it is an entirely different plant. As hepatica is now an endangered species, please support those who cultivate this herb instead of harvesting it from the wild yourself.

Watch a short video, from Ann Christensen, Founder and Creator of White Rabbit Institute of Healing™ – What Else Can Hepatica Treat?

Below is an overview of hepatica, combining the best of Western Science, Oriental Medicine, Traditional Chinese Medicine (TCM), Shamanism, Folklore, and a wide range of healing modalities. Gain a balanced and thorough understanding of the healing properties of hepatica.

How to take FULL advantage of Hepatica's healing powers... 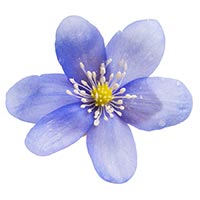 JOIN ME in an exploration of the healing herb, Hepatica (Gan). Explore the benefits and applications of Hepatica, from Eastern and Western perspectives, and so much more!

Hepatica is in the butternut or crowfoot family, Ranunculaceae. It is a small, odorless evergreen shrub with roots made of numerous strong fibers. Its leaves are all radical, on long, hairy petioles. The flowers, which appear almost as soon as the snow recedes in the spring, are single and generally blue but sometimes white

Hepatica likes the damp shady undergrowth provided by deciduous trees, especially beech trees. It can also be found growing in woodlands and scrub and grasslands, especially on limestone. The plant is commonly found in North America, Europe, and East Asia.

Caution: High doses of hepatica may irritate the kidneys and urinary tract. Some people may experience nausea or diarrhea. Avoid fresh leaves as they contain the toxic substance protoanemonin, which is converted to anemonin when dried. Heptica is poisonous in large doses. This toxicity is used by trained herbalists and healthcare practitioners to disperse Heat or eliminate Drying.

History/Folklore: Hepatica is a mild remedy that has been traditionally used to treat a variety of ailments but most especially the kidneys, liver, and gallbladder. It is not often used in modern herbalism and is an endangered species. It was once a go-to herb for cleansing the blood, supporting the liver, and treating a wide variety of liver ailments. Externally it can be used to treat slow-healing wounds and skin diseases.

The demand for and interest in liverwort (Marchantia polymorpha L.), an entirely different plant from hepatica (Hepatica nobilis, H. acutiloba. H. americana, H. triloba), soared in the 1880s, likely due to mistaken identity and to an attempt to fill the demand for the popular cure-all hepatica. This demand became known as the “hepatica boom”. In 1883 the consumption of hepatica in the U.S. alone was about 450,000 pounds, with much of the supply being imported from Europe.

The Chippewa tribe used hepatica to treat convulsions in children and called the herb it-is-silent, a possible reference to the herb’s ability to quiet the symptoms of convulsions. Both the Cherokee and Chippewa tribes used the leaves to treat liver disorders.

Hepatica has been used to treat fevers, coughs and colds, bleeding from the lungs, and hepatic complaints (liver complaints from cirrhosis, fatty liver disease, nausea, jaundice, hepatitis, abdominal pain, and vomiting). The plant’s mucilaginous and astringent properties make it a good herb for treating bronchitis.

Hepatica extract has long been used to treat gallstones, and its mildly astringent properties can help calm an upset stomach and stimulate contractions in the intestines to help promote proper bowel function. The herb has also been used to stimulate appetite.

The tannins and flavonoids found in hepatica are known to contain antioxidant properties that can help prevent the damage caused by free radicals. These compounds also inhibit the growth of fungi, yeasts, bacteria, and viruses, helping to prevent a wide variety of infections and ailments associated with these various microbes. The astringent properties of the tannins also help to treat internal bleeding. The herb has been used to treat slow-healing wounds and minor injuries.

Hepatica can be used as a gargle to help soothe swollen sore throats, ease coughing, and reduce chronic irritation of the neck and throat.

In homeopathy, hepatica is an old remedy used to treat bronchitis, irritated sore throats, poor digestion, and congested lungs. As a homeopathic remedy, it is used very specifically to treat bloody mucus blown from the left nostril for three or four days in succession…a very precise application!

It used to be a widespread practice to eat the first emerging flowers in spring, as it was believed they offered protection against a variety of diseases and viper bites.

Some of the triterpenoid saponins found in hepatica display immunomodulatory, antioxidant, anticancer, anti-inflammatory, and antimicrobial properties.

The genus Anemone contains more than 50 species of flowering plants and is closely related to Pulsatilla, Clematis, and Hepatica. In Traditional Chinese Medicine, these species are known for, among other things, Clearing Heat, Eliminating Damp, and Dispersing Wind.

Tea made from hepatica can be applied externally as a wash to treat swollen breasts.

Back in the day, hepatica was used to help reduce freckles.

Hepatica is used in homeopathy to treat bronchitis.