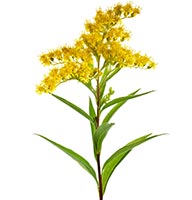 Goldenrod is used to reduce pain and swelling. It is often used in Europe to treat bladder and kidney problems. It is also famous for its ability to treat allergies, skin problems and cardiovascular issues. Using goldenrod in the winter can help build a person’s immunity to prevent flu and in preparation for the spring and summer season of allergies.

Goldenrod is a member of the Asteraceae (Daisy) family. It is in the genus Solidago. The plant multiplies by sending out root runners. It is a perennial with stems that range from crawling to ascending or erect. It grows 2 to 3 feet high, with alternating leaves and panicles of yellow golden flowers at the top. The flowers are usually radiate, which is the same as the daisy flower which has heads with distinct ray and disc florets. Numerous heads are grouped in complex compound inflorescences.

Goldenrod is native to Europe and Asia. It can now also be found growing wild in most of North America. The plant likes pastures, savannas, prairies and mountainsides.

History/Folklore: Do not confuse goldenrod (Solidago canadenis) with Verbascum densiflorum, which is also sometimes commonly called “goldenrod” but which is a different genus and species of plant. The word “solidago” means “to make whole” in Latin. The species S. canadensis and S. odora are considered to be the most medicinal, but all species of goldenrod are safe and healing.

When the herb was presented to Queen Elizabeth I, in England it commanded high prices, until it was identified to be growing wild all over England!

Early American colonists called goldenrod tea, “Liberty Tea” as they drank it instead of the black tea after the infamous Boston Tea Party (when British tea was thrown overboard into Boston harbor in a sign of revolt over tea taxes). The tea was so popular it was even exported to China! The colonists also used the flowers to make dye with.

Some say goldenrod is higher in antioxidants than green tea. Some think they are allergic to goldenrod, but this is not so as the plant’s pollen is quite sticky and carried by insects and not in the wind the way allergy causing pollens are.

Goldenrod is frequently used in Europe to treat urinary tract infections and to prevent kidney stones. It is considered a natural kidney and bladder remedy as it increases the flow of urine while soothing inflamed tissues. The plant’s astringing and antispectic qualities tighten and tone the urinary tract. Goldenrod is also recognized as a kidney tonic, helping to restore, re-balance and nourish the kidneys, especially if the condition has become chronic.

A blend of plantain, yarrow, St John’s wort and goldenrod makes an effective wound healing salve for the skin, or for treating achy muscles or arthritic joints.

Goldenrod tonics are easy to make. Cut off the top third of the plant in full bloom in fall. Fill a jar with chopped flowers, leaves, and stalks (it is OK to include the roots, if you have them); then add 100 proof vodka, filling the jar to the very top. Seal the jar air tight and the tincture will be ready in 6 weeks.

Folklore says that the stem of the plant made an excellent divining rod and if grown near the house it would bring good fortune to the family. It is considered a symbol of good luck and good fortune. Legend says wherever goldenrod grows treasure can be found. It is consequently used in spells for attracting money and wealth.

The flowers are edible and can be dipped in batter and fried for a tasty treat. Native Americans chewed goldenrod leaves to relieve sore throats and roots to relieve toothaches.

Goldenrod contains natural rubber and Thomas Edison experimented with creating a natural fertilizer that would maximize the rubber content of each plant. Henry Ford gave Edison a Model T with tires made from goldenrod. The rubber is only contained in the leaves.

Goldenrod can crossbreed with other plants. As a result, there are over 130 species of goldenrod in the U.S. alone.

Goldenrod contains rutin, a powerful flavonoid that is known to benefit the cardiovascular system.

It is recommended that when using Goldenrod tea that you drink it between meals.