Goldenberry (aka Physalis) resembles a tomatillo, wrapped in a papery case. It is sometimes called Chinese lantern. It is an excellent source of vitamins A, B1, B3, B6, C, E, and K. Native to South America its history is traced back to the Inca. In the U.S. the plant is marketed as goldenberry. Oil made from the seeds contain linoleic and oleic acids.

Watch a short video, from Ann Christensen, Founder and Creator of White Rabbit Institute of Healing™ – 3 Things You Don’t Know About Goldenberry…

How to take FULL advantage of Goldenberry's healing powers... 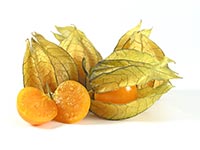 JOIN ME in an exploration of the healing herb, Goldenberry (Suan Jiang). Dive deep into the benefits and applications of Goldenberry, from Eastern and Western perspectives, and so much more!

Goldenberry is in the nightshade family Solanaceae. It is closely related to the tomatillo and the Chinese lantern. In the tropics it is a perennial plant, in more temperate climates it is an annual. It grows into a diffusely branched shrub that can be 3 to 5 feet tall with spreading branches and velvety, heart-shaped leaves. The flowers are bell-shaped and drooping with yellow and purple-brown spots internally. When the flowers fall, the calyx expands and ultimately forms a beige husk that encloses the fruit. The fruit is a round, smooth berry that resembles a miniature yellow tomato. It is green when it is unripe.

Physalis is native to the mountain slope regions of Peru, Chile, Ecuador, and Colombia. It is now cultivated across the world in temperate and tropical regions.

Caution: The ripe fruit is considered safe, however, the unripe berries and leaves are highly toxic and in rare cases, even fatal if ingested. High doses can be an abortifacient.

History/Folklore: Native to the Peruvian and Chilean highlands, physalis has been cultivated by the Incas as far back as 4,000 years. The fruit has long been a part of South American cuisine. The name “physalis” comes from the Ancient Greek word for bladder, referring to the bladder-like appearance of the fruit’s husk. The fruit is safe but the other parts of the plant are highly toxic–although they can be sometimes used in herbal medicine. In the UK it is commonly called physalis, in the U.S. it is known as goldenberry.

Goldenberry has been cultivated in England since the late 18th century and in South Africa since the start of the 19th century, hence the common name, “Cape Gooseberry”, though it is not botanically related to actual gooseberries. The French refer to the fruit as “love in a cage”. Goldenberries are related to tomatoes (and potatoes too!) They are all in the family Solanaceae.

Physalis is not often used In Traditional Chinese Medicine. One exception is the species P. alkekengi (Jin Deng Long/Chinese lantern, which, unlike P. peruviana, has an unpleasant, bitter taste.. Here the entire plant, including the roots, is used to make medicine for sore throats, acute tonsillitis, laryngitis, hepatitis, urinary problems, and treating tumors. Studies confirm its effectiveness for treating 7 different types of Staphylococcus bacteria.

The Chinese also make use of P. angulata (Pao Zai Cao) to help Clear Heat from the Lungs in order to soothe sore throats and stop coughs.

Left inside the calyx, the fruits shelf life at room temperature is about 30 to 40 days. The calyx is not edible. The fruit is eaten raw, cooked, juiced, or dried. The fruit has a sweet, citrus flavor with an acidic aftertaste. Dried commercial berries are chewy and often have sugar added as compared to other berries they have a lower sugar content. They can be very acidic and tart. They contain the same amount of vitamin C as blueberries and are higher in vitamin A.

The anti-inflammatory compounds found in physalis help to improve blood flow to certain parts of the body.

Physalis has become invasive in some natural habitats, forming thickets, especially in Hawaii and on other Pacific islands.

In China, P. alkekengi is the most commonly used species of Physalis. Unlike the delicious and nutritious P. peruviana, the species P. alkekengi is very bitter and not suitable as a food. It is only used to make medicine.

How to use Goldenberry (Suan Jiang) and take FULL advantage of it's healing powers!