Ginger produces a hot, fragrant spice that has been used in candy, foods, medicines, teas, beverages, and wines. It is used in international cooking for its flavor and ability to detox food. It is a well-known cure for motion sickness and has a long worldwide history of medicinal use.

Below is an overview of ginger, combining the best of Western Science, Oriental Medicine, Traditional Chinese Medicine (TCM), Shamanism, Folklore, and a wide range of healing modalities. Gain a balanced and thorough understanding of the healing properties of ginger.

How to take FULL advantage of Ginger's healing powers... 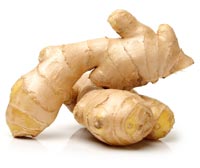 JOIN ME in an exploration of the healing herb, Ginger (Sheng Jiang). Explore the benefits and applications of ginger, from Eastern and Western perspectives, and so much more!

There are more than 80 species of ginger spread throughout the world. Ginger is an herbaceous perennial that grows annual stems about a meter tall with narrow green leaves and clusters of white and pink flower buds that will bloom into yellow flowers.

Ginger is indigenous to southern China and spread to other parts of Asia, West Africa, and the Caribbean. There is also a wild ginger, which is related to Zingiber officinale, that is native to North America.

Caution: Considered very safe. Use carefully if the stomach condition is caused by Heat, as ginger is already a hot, dry herb.

History/Folklore: Ginger is often used with honey to help mask the flavor of other herbs that are either very bitter or distasteful. Recent research has verified that ginger helps other herbs reach their destination, confirming its title as a key guide herb (or tropism enhancer). In TCM (Traditional Chinese Medicine) ginger is also known to help reduce the toxicity of other herbs. Ginger also has important anti-inflammatory and immune-enhancing properties.

The American Cancer Society has promoted ginger as a treatment to prevent cancer tumors from developing. The Mayo Clinic reports that there is evidence for effective use of ginger to counter nausea and vomiting during chemotherapy. As ginger does not interact with chemotherapy drugs, it is often recommended as safe for calming the stomach during these kinds of treatments.

Ginger has a potent, perspiration-inducing action that helps cleanse the system of toxins. It is commonly found in most detoxing programs because it can stimulate digestion and promote circulation and sweating, helping to cleanse a build-up of waste and toxins in the liver, colon, and other organs.

The ancient Egyptians believed ginger was a diluter, desiccator (creates a dry environment), and emollient for treating sore throats. Ginger was known in 9th century Germany and France. Buttermilk-based drinks flavored with ginger were used in 11th century Europe. It was then often traded, at high prices, on the Silk Road throughout the Middle Ages.

Many cultures have benefited from using this herb. The Chinese recognize ginger as a whole body Yang Tonifying herb that is good for Warming the Body and Lifting the Spirit. The ancient Hawaiians used to drink the sweet juice from the stems of ginger flower heads after a long hike. In Ayurvedic medicine, ginger is used to treat pain, arthritis and blood platelet clumping.

In Traditional Chinese Medicine (TCM), ginger is often used for conditions of Exterior Deficiency, such as colds and flu symptoms, when sweating is not improving the condition. The skin of ginger is also used to promote urination and reduce edema. Ginger’s ability to Cleanse Toxins from the system is one of its many key uses in TCM. It has even been shown to significantly improve symptoms and liver chemistry associated with NAFLD (non-alcoholic fatty liver disease).

In Chinese culture, ginger is a symbol of good health and longevity. It is often found in Korean New Year beverages and candied, it is served in the “Tray of Togetherness”.

Pickled ginger is served with Japanese sushi dishes to counteract any potential toxicity from eating raw fish. It takes advantage of the gut biome promoting qualities associated with pickled foods and the detoxing properties associated with ginger’s compounds and energetic qualities.

Ginger leaves and the young shoots are also edible and can be chopped up and added to dishes as a seasoning. Their flavor is milder than the plant’s roots.

The creation of the soft drink ginger ale sprang from the folklore tradition of using ginger to treat upset stomachs. Ginger is also used as a fragrance in soaps and cosmetics and as a flavoring agent in many foods and beverages.

Ginger wine has been made commercially since 1740.

Ginger is a minor chemical irritant and the mounted regiments pre-WWI used it as a horse suppository to cause feaguing, inducing the horse to carry its tail high.

Some recommend pouring the fresh juice of ginger on the skin to help treat burns.