Garlic is best known for its powerful anti-microbial and immune-enhancing properties. It is a warming herb that is wonderful in teas and meals, making it easy to incorporate into any diet and health regime. It prevents illness, lowers high cholesterol and blood pressure, cures ear and lung infections, and helps move Qi, preventing stagnation and inflammation.

Watch a short video, from Ann Christensen, Founder and Creator of White Rabbit Institute of Healing™ – What You Might Not Know About Garlic…

Below is an overview of garlic, combining the best of Western Science, Oriental Medicine, Traditional Chinese Medicine (TCM), Shamanism, Folklore, and a wide range of healing modalities. Gain a balanced and thorough understanding of the healing properties of garlic.

How to take FULL advantage of Garlic's healing powers... 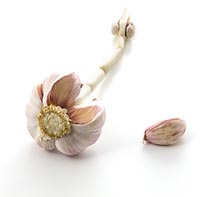 JOIN ME in an exploration of the healing herb, Garlic (Da Suan)​. Explore the benefits and applications of Garlic, from Eastern and Western perspectives, and so much more!

Grows year around in mild climate. Has a whitish flower that is often interspersed with small bulbs.

It is Native to Central Asia. China is by far the largest producer, followed by India, South Korea, then Egypt.

Caution: Considered very safe. Some people are allergic to garlic.

History/Folklore: The use of garlic dates back as far as 6,000 years ago. It was used by the ancient Egyptians as a medicine and in cooking. It has been used for thousands of years in Traditional Chinese Medicine for its ability to prevent and fight infections and counter the effects of toxicity due to germs, environmental factors, or poor dietary choices. Modern studies confirm garlic’s ability to help promote heart health, counter infections, fight cancer, and prevent inflammation.

According to researcher from the University of Copenhagen, studies have shown that garlic can be effective in fighting bacteria known to cause lung conditions, cystic fibrosis, as well as pneumonia, bone infections, and sepsis.

Garlic contains the compound allicin. Allicin exists only in raw garlic. Cooking garlic kills the compound and causes it to decay into other compounds which are less effective.

Garlic works inside the body by promoting the ability of white blood cells to fight infections, and by stimulating other immune cells which fight viral and bacterial infections as well as cancer.

There is a wealth of scientific literature that supports the consumption of garlic, (especially raw garlic or garlic extract) for its significant effects on lowering blood pressure, preventing atherosclerosis, reducing serum cholesterol and triglyceride levels, inhibiting platelet aggregation, and increasing fibrinolytic activity.

Studies confirm that garlic is particularly effective at fighting colds and flu and other respiratory infections as well as fighting herpes and other bacterial and viral infections.

Garlic’s anti-inflammatory properties make it an excellent choice for treating arthritis, joint pain, and other conditions associated with inflammation, whether due to injury, diet, or lifestyle choices. Its warming properties help move cold stagnation and break up swellings, masses, and tumors.

Garlic has been used by every culture to ward off evil. Turkish myth says that when Satan left the garden, garlic arose on his left footprint and onion on his right footprint.

Mohammed did not like the smell of garlic and onions. To this day Muslims do not eat garlic before attending mosque as a courtesy to others, making sure their breath is fresh and not unpleasant.
.
Buddhists, Hindus, and Jains consider garlic as capable of stirring desires, stimulating sexual drive as well as aggression.

The ancient Romans ate it before battle to give them strength and stamina.

Garlic was also used in WWI and WWII to prevent wounds from turning septic.

Garlic facilitates protein/amino metabolism, helping to remove heavy metals from the body. It also kills parasites. In Traditional Chinese Medicine, it is considered an outstanding herb for detoxing the blood, liver, and the whole Body.

Garlic flowers have a mild taste that can make them a nice touch to a spring salad. They can also be fried with butter or used in pesto.

When planted in the garden, garlic repels rabbits and moles.

The ancient Romans ate it before battles.