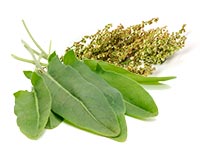 The name “sorrel” is used to describe several related plants, including “wild sorrel” and “French sorrel.” The plant has a long history of treating scurvy and kidney stones. Though large doses (500 grams or more) may cause kidney stones. It is popularly used in salads, sauces, stews, and soups for its lemony flavor and high Vitamin C and Vitamin A content. It is also good for treating cold sores and febrile diseases. In China, they make use Oxalis corniculata which is also called sorrel, or Indian sorrel, but it is in fact a different plant from the Rumex family and is not a member of the Oxalis family of sorrels.

Garden sorrel is a perennial herb in the family Polygonaceae, which includes buckwheat and rhubarb. The leaves are oblong, with the lower leaves running from 3-6 inches in length and slightly arrow-shaped at the base, with very long petioles. They frequently become a beautiful crimson. It has whorled spikes of reddish-green flowers that bloom in June and July. As the flowers grow they become purplish in color. The roots run deeply into the ground.

Wood sorrel is not a member of the Rumex family. It is a member of the Oxalidaceae family of which there are over 900 species. It is a pretty woodland wildflower that is discussed as a separate herb.

The English physician Culpeper recommended sorrel “to cool any inflammation and heat of blood.” He said it “refreshed overspent spirits” and could “quench thirst, and to procure an appetite.”

The herb tastes best in early spring, becoming increasingly bitter as the season progresses. The tender young leaves of early spring are excellent in salads, with the larger leaves being used in soups, sauces and stews. Because sorrel is best when used fresh, young and in the early spring, you will rarely see it in super markets or even in recipes, as it is known to now be difficult to locate. Growing your own is the best source of this wonderful herb.

In England children and country folk will still eat the leaves to remedy thirst. In Ireland a popular recipe is using sorrel with fish and milk.

In the spring after danger of frost, sow sorrel seeds directly in the garden in full sun or partial shade. You can also sow the seeds in the fall two weeks before the first frost date. Seeds will germinate in about 10 days. When the young plants are 2 inches tall, thin to 18 inches apart. Harvest the young leaves often, not allowing the plant to flower or set seed, as this slows the growth of additional leaves. Garden sorrel is frost-hardy.

Typically the leaves are used, but the roots and seeds have been used for their astringing properties to help treat hemorrhaging. Some use just the seeds prepared in a wine to help stop bleeding.

The constituents oligomeric and polymeric proanthocyanidins, including sorrels flavonoids, are showing results with reducing the spread of herpes simplex virus type-1 (the variety causes cold sores or fever blisters), but mores studies are still needed to confirm this.

Sorrel is often paired with goat cheese, eggs and poultry.

Do not cook sorrel in cast iron or aluminum cookware as the oxalic acid in sorrel reacts with the metals to produce a metallic flavor. When using aluminum, the acids in sorrel may allow potentially toxic quantities of aluminum ions to leak from the cookware.

Consuming large amounts of sorrel (500+ grams) may increase the risk of kidney stones and in some rare cases, even death. Ingesting or eating typical amounts provided in salads, sauces and soups is safe.

Many Rumex species are considered weeds in the U.S. They are known for their lemony, tart flavor.

The Chinese use Oxalis corniculata, which is also called sorrel, or Indian sorrel, but is in fact a different plant and not from the Rumex family of sorrels. This herb is a common weed found throughout India. Similarly it is used to cool, astringe and treat diarrhea, fever, hemorrhoids, inflammation, and scurvy.

Domestic animals are fond of sorrel.

People with arthritis or kidney stones should only eat small quantities of sorrel, as the oxalic acid in the herb is known to aggravate these conditions.

Reacts with Some Metals

Do not cook sorrel in cast iron or aluminum cookware. The oxalic acid in sorrel reacts with the metals to produce a metallic flavor.  When using aluminum, the acids in sorrel may allow potentially toxic quantities of aluminum ions to leak from the cookware.

Rich in vitamin C, sorrel has been used for centuries to prevent scurvy, which is a life-threatening condition when fresh fruits and vegetables are not included in your diet.