Pronounced guh-LANG-guh, galangal is in the ginger family, but it is not ginger! It is used extensively in Asian cuisine and as a medicine. It is often used to treat digestive disorders, diseases associated with inflammation, such as arthritis, diabetes, and Alzheimer’s. It has been shown in studies to be highly effective for treating and preventing the spread of gastric, breast, colon, pancreatic, liver, bile duct, leukemia, and melanoma cancers.

Watch a short video, from Ann Christensen, Founder and Creator of White Rabbit Institute of Healing™ – Unexpected Uses of Galangal.

Below is an overview of galangal, combining the best of Western Science, Oriental Medicine, Traditional Chinese Medicine (TCM), Shamanism, Folklore, and a wide range of healing modalities. Gain a balanced and thorough understanding of the healing properties of galangal.

How to take FULL advantage of Galangal's healing powers... 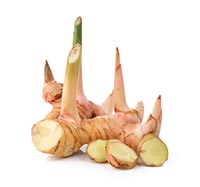 JOIN ME in an exploration of the healing herb, Galangal (Gao Liang Jiang). Explore the benefits and applications of Galangal, from Eastern and Western perspectives, and so much more!

Galangal is a reed-like perennial herb with stems that can grow up to be about 5 feet tall and are covered with sheaths of narrow lanceolate leaves. It has white flowers that are veined and shaded a dull red. Its leaves are long, narrow blades. Its rhizomes are seldom more than ¾ inch thick.

Caution: Considered safe when used in cooking and in recommended doses. Used in extremely high doses it may cause stomach upset.

History/Folklore: Besides galangal’s digestive and antibacterial properties, the herb is also being used for its anticancer properties and its ability to support healthy brain function. Significant studies have shown the herb to be effective against leukemia, pancreatic, colon, breast, gastric, liver, bile duct, and melanoma cancers.

Studies have confirmed that a liquid extract made from the herb significantly destroyed gastric cancer cells. It has also shown an ability to do the same for acute monocytic leukemia, which is a fast-moving leukemia. Using chemotherapy to treat this type of leukemia has the dangerous effect of destroying neighboring healthy cells and galangal extract does not have this side effect. Further studies have shown that galangal significantly inhibits the growth of pancreatic, colon, breast, liver, bile duct, and melanoma cancers.

Galangal has been used in Chinese and Ayurvedic medicine for thousands of years. It was brought to England and northern Europe in the 13th century by the crusaders where it became a popular spice and medicine. St. Hildegard of Bingen (1098-1179 C.E.), recommended the herb as the spice for life and used it in many of her formulas. The herb also has a long history in Arabic medicine for its healing properties.

In Traditional Chinese Medicine, lesser galangal (A. officinarum) is used to treat conditions associated with Cold in the Middle Burner with such symptoms as abdominal pain, vomiting, diarrhea, and chronic inflammation in the digestive tract caused by Cold. It is also an important ingredient in Tiger Balm and Universe Oil, two commonly used products to help treat muscle aches, headaches, insect bites, and other minor ailments. The powdered root is often used with salt on roasted chicken or vegetables.

Do not confuse galangal (A. galangal and A. officinarum) with Boesnebergia rotunda (aka Chinese Ginger or Fingerroot) or Kaempferia galanga (aka Black Galangal or Sand Ginger), both also commonly called galangal, but which are in fact, two entirely different plants.

Galangal is often used in Indonesian, Chinese, and Asian cuisine for its mild spicy flavor, described as being between pepper and ginger. It is often cooked with lemongrass In Asia, young inflorescences and leaves are eaten raw in salads. Galangal oil is used to flavor French liqueurs and even some tobaccos. The large, ordinary, preserved ginger of China is actually A. galanga (greater galangal) and not common ginger (Zingiber officinale). The Russians use it to make a liqueur called “nastoika” and it is popular in Lithuania and Estonia. In India, galangal oil is valued for making perfume. The powder has been used as a snuff for catarrh. The seeds of galangal are used as a breath freshener, digestive aid, and dental cleanser.

Galangal has been shown in vitro to inhibit anthrax bacillus. The herb has antibacterial and antifungal properties that help treat food poisoning caused by staphylococcus, E. coli, listeria, salmonella, and clostridium. It has been found to even fight amoxicillin-resistant E. coli and actually reverse the resistance some strains have to amoxicillin. Using galangal to cook shellfish, especially oysters, reduces the chance of contracting vibriosis, a bacteria that causes food poisoning in undercooked shellfish.

The kaempferol compound found in galangal helps to reduce mastitis (inflammation of the nipple caused by breastfeeding).

Galangal can be blended with aloe to help counter the herb’s potential laxative effects.

Galangal has many magical applications to increase your psychic abilities. It can give you the power to win a court case by spitting the juice from a chewed piece of root before the judge enters. Put a sprig in your pocket to double your money in a transaction. Burned in your environment it can cleanse negative energies and break hexes.

Older galangal root that has become hard and woody can be used by pounding it into a paste.

Homeopaths use the herb as a stimulant.