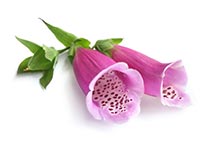 The leaves of the foxglove plant are used to extract the constituent, digitalis, used to make the pharmaceutical drug, also called Digitalis, that is used to treat irregular and overly fast heart rates. It was first written about in Ireland and then Scotland where it still grows wild as early as the 13th century. The plant has also been related to witchcraft for centuries. It was used in pagan rituals and potions and long associated with the fairies and breaking their enchantments.

Foxglove is a genus of about 20 species of herbaceous perennials, shrubs and biennials commonly called foxglove. Traditionally it was placed in the figwort family Scrophulariaceae, but recent research has placed it in the family Plantaginaceae. The flowers are produced a tall spike, are tubular and vary in color from purple to pink to white or yellow.

Foxglove is native to western and southwestern Europe, western and central Asia and northwestern Africa. They like acidic soils, often growing on land that has just been burnt and prefer partial sunlight to deep shade. It needs little soil and can be found growing out of stone walls, rocky places, or in dry hilly pastures.

Caution: The entire plant is toxic, including its roots and seeds. It should never be used in large doses or over a long period of time. Overdose symptoms include nausea, vomiting, wild hallucinations, delirium, severe headaches, tremors, convulsions and possible death.

History/Folklore: The plant’s name, Digitalis, is also the name of a pharmaceutical drug that is made from the plant’s constituent, digoxin, a cardiac glycoside. It is used to increase cardiac contractility to help control heart rate, especially in irregular or often fast atrial fibrillation, as is often the case in persons with congestive heart failure. The drug works by inhibiting sodium-potassium ATPase. This causes an increase in intracellular concentrations of sodium ions which then decrease the concentration gradient across the cell membrane. This switches the cell from pumping sodium into itself to pumping calcium out of the cell, this increase in cytoplasmic calcium in turn improves cardiac contractility.

Do not confuse what is commonly called Chinese foxglove root (Radix Rehmannia) with foxglove (Digitalis purpurea). They are two entirely different plants.

Foxglove increases the functionality of all forms of muscle tissue, especially the heart and arterioles. It is famous for its ability to improve the circulation of blood. It can also treat internal hemorrhage, inflammatory disorders, acute mania and epileptic cases.

Foxglove is toxic and an overdose can lead to nausea, vomiting, diarrhea and even collapse, tremors and seizures. A frequent side effect of foxglove is reduced appetite leading to weight loss. The drug is a perfect example of a pharmaceutical being derived from a plant that was well known for its effect on the heart.

The constituent digoxigenin is a steroid found exclusively in the flowers and leaves of foxglove. It is used as a molecular probe to detect DNA or RNA.

Early herbalists used the leaves to increase all forms of muscle tissue, but especially muscles of the heart, in order to improve heart rate and raise blood pressure. It can take up to 12 hours for its effects on the heart to be appreciated. Other odd uses included it being used to bind wounds and other conditions that have nothing to do with the plants real properties or benefits. It was also used to treat epilepsy, delirium and acute mania but it remains unclear if the results were real or imagined.

The plant is also a powerful diuretic and has been used effectively to treat dropsy, especially if this condition is associated with heart problems.

In Roman mythology, depending on the source, either Hera of Juno impregnated themselves without a man by touching foxglove to their bellies and breasts, thus giving birth to either Mars or Vulcan. The plant itself is associated with Saturn or Venus.

In old Scandinavian legends it is said that the fairies taught the foxes to ring foxglove bells to warn each other of approaching hunters.

Dew collected from foxgloves can be used in rituals to communicate with the fairies and the leaves are used to break fairy enchantments. Do not let it touch your skin or inhale the smoke if you burn the leaves….it is toxic. If you want fairies to visit you, plant foxglove, it will attract them to your garden.

Yellow foxglove is not used much medicinally, it is the Wooly foxglove that is the main source of cardiac glycosides having three times the physiological effects as other common foxglove varieties. This does not mean that the common foxglove does not still have a profound tonic effect on the heart.

The normal life cycle of the plant is two years, but they can sometimes take root and throw up flowers for several seasons. The flowers are very popular with honey bees and other small insects, who like to hide out in the blossoms to stay warm and dry on wet chilly evenings. The bottom leaves should always be left behind to allow next years stalks to grow back, never cut it off at the root.

The plant’s botanical name means “finger-like” and refers to the ease with which the flowers can be slipped onto a finger, or some say resemble a finger. The name “foxglove” derives from an old English legend that says foxes must have worn the flowers on their paws to help them move more stealthily through gardens and hen houses. The hillsides where foxes made their dens were often covered with toxic flowers. The other common names, such as “witches glove” derives from the plant’s toxicity. An old saying says, “foxglove can raise the dead and kill the living.”

The drug digitalis, made from the constituents in foxglove, is a classic emergency room drug of choice for treating ventricular fibrillation in emergency situations.

Foxglove is a common wildflower in Great Britain, found in woods and along country roads.