Unlike most fruits, dried figs contain more nutritional value than fresh figs, though both are highly nutritious and good for you. Certain compounds in figs are known to be toxic to human cancer cells, making figs a good anticancer food. They are rich in antioxidants helping to keep you healthy and slow the effects of aging. Fig leaves are also useful for treating diabetes, skin cancer, fighting wrinkles caused by aging, and lowering cholesterol. Traditional Chinese Medicine considered figs to be a Yin and Yang balancing food.

Watch a short video, from Ann Christensen, Founder and Creator of White Rabbit Institute of Healing™ – Is there really a wasp inside every fig?

Below is an overview of anemarrhena, combining the best of Western Science, Oriental Medicine, Traditional Chinese Medicine (TCM), Shamanism, Folklore, and a wide range of healing modalities. Gain a balanced and thorough understanding of the healing properties of anemarrhena.

How to take FULL advantage of Fig's healing powers... 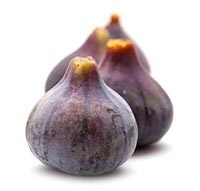 JOIN ME in an exploration of the healing herb, Fig (Wu Hua Guo). Dive deep into the benefits and applications of Fig, from Eastern and Western perspectives, and so much more!

Figs are a member of the mulberry family. The figs develop from a cluster of inverted flowers called a syconium. Fig flesh is actually made from the matured flowers which bloom inside the skin and are therefore never seen. Figs are unique in that they have an opening called the “ostiole” or “eye” that is not connected to the tree, but lets the fruit develop by increasing its communication with the environment in which it lives. Figs can range in color and texture depending on the variety from deep purple to green to a pink-tan flesh. The trees can grow to be 100 feet tall, producing fragrant leaves that are long and deeply lobed with each leaf having three or five lobes.

Figs are native to Western Asia and the Middle East and are now grown in temperate climates all over the world.

Caution: Very Safe. Some people with allergies to mulberry or natural latex may be allergic to fig tree fruit or leaves. Fig latex is toxic and not recommended for internal use. Used externally it can cause skin irritation so use with caution, if at all.

History/Folklore: Figs are an excellent source of prebiotics that improve overall gut health. They are an excellent source of calcium and potassium which improve bone density. Figs are said to be one of the first plants to be cultivated by humans. Archeological findings in Neolithic villages dating from 9400-9200 BC reveal fossils of figs, predating the cultivation of wheat and barley. They are often mentioned in the Bible. Some believe that it was a fig and not an apple that was The Forbidden Fruit that Eve ate in the Garden of Eden. The ancient king Mithridates of Pontus in Northern Anatolia, one of Ancient Rome’s most formidable opponents, proclaimed figs to be a health tonic in 1551 BCE.

Figs have been used throughout history on long voyages to help maintain health.

Figs were so popular with the Ancient Greeks that there were laws preventing the exportation of the highest quality figs. In Rome, the founding myth of Romulus and Remus and the wolf that nurtured them occurred under a fig tree. They are an essential component in the currently popular Mediterranean Diet, which is one of the healthiest diets in the world. The Roman herbalist, Pliny regarded them as a great aid for building strength and speed. A diet of figs was fed to the gladiators to help build their stamina and to geese for the production of foie gras. The Spartan athletes also ate figs to build strength.

A cough remedy, taken from the Queen’s Closet Opened, dating from 1655, recommends a handful of hyssop, blended with one ounce each of figs, raisins, dates, and barley be brought to a boil in a quart of water, and then strained. Add two egg whites with sugar and honey and bring to a boil again. Variations of this effective cough syrup are still used today.

The high levels of potassium in figs help to control blood pressure. Figs are also an excellent source of dietary fiber which has been shown to help with weight loss. The fiber helps support a feeling of fullness and it also has been shown to assist the intestines by supporting proper bowel movements and motility, leading to improved detoxification. Taken together these two functions support weight loss. Figs also contain prebiotics that support gut health and digestive function.

In some cultures, fig leaves are part of the diet. They can also be eaten raw, cooked, baked, or grilled.

Fig leaves are considered to have insulin-lowering properties allowing a diabetic to actually lower the amount of insulin they need to take.

In China, the species F. lacor is used to induce sweating, and the species F. retusa is used in China, Indonesia, and Australia to treat toothache and tooth decay. Besides using the fruit and dried leaves, the Chinese will also pound and powder the figs for external application or use in decoctions, washes, and poultices. Traditional Chinese Medicine considers figs to be a Yin and Yang balancing food.

The species F. maxima is used in Central America as a poultice to treat wounds and bruises. The sap is applied to scorpion bites and to treat ringworm. The dried leaves are smoked and used to treat asthma and the fruit is used to treat constipation.

The Aztecs made paper, called “amati” from the inner bark of the fig tree. Their codices were recorded on this kind of paper. Because the paper was used in sacred ceremonies it was banned by the Catholic Church during the colonial era. Remnants of this tradition managed to survive in parts of rural Mexico where fig bark paper is cut into the shapes of crops and planted along with seeds as an offering to ensure good harvests. The paper is still used for sorcery by Mexican “witches” to make paper dolls for spells of love or for a hated enemy. In some towns, artists use brown “amati” to make colorful paintings that are sold in shops and markets.

Traditional Arabian medicine uses figs as a diuretic, laxative, and emollient for treating hemorrhoids, leprosy, and building strength and stamina.

Fig leaves have been dried and used in perfumes and as an ingredient in potpourri to cleanse and refresh indoor environments.

“The rarest of the rare,” is a Hindi saying that relates to the fact that the flowers of the fig tree are never seen.

Fig trees produce a natural latex sap that is used for practical and medicinal purposes. As latex can be toxic, internal use is not recommended. However, recent studies indicate that fig latex inhibits the growth of cancerous stomach cell growth within the stomach lining. It is being reviewed for use in pharmaceutical medicines. The latex is also considered to have analgesic properties as well as being safely used externally to treat warts, tumors, hemorrhoids, and insect bites. Be aware though, external use can cause allergic reactions in some people who will experience itching and irritated skin. Use with caution. This leaf sap is also very irritating to dogs on their skin or if ingested. Do not give figs leaves to dogs.

Figs are a symbol of peace, abundance, and prosperity.

The word “sycophant” derives from the Greek word meaning, “one who shows the fig,” a reference to a vulgar gesture made with the hand.

The state of California in the United States is one of the largest producers of figs along with Turkey, Greece, Portugal, and Spain. They were brought to California by Spanish missionaries led by Father Junipero Serra, a Roman Catholic priest who was canonized in 2015. The trees are drought tolerant and help to create shady cool areas for animals to take shelter under during intense heat.

Besides containing antioxidants, vitamins, and minerals, one average size fig also contains about 35 calories, over a gram of fiber, and over 3% of your daily value of potassium.

Properly dried and stored figs can last for as long as 18-24 months, while still maintaining their nutritional value.

How to use Fig (Wu Hua Guo) and take FULL advantage of it's healing powers!