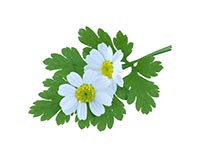 Feverfew is a herbaceous perennial plant that is a member of the daisy family Asteraceae. Its leaves are a light yellowish green and vaiously pinnatifid. Its daisy-like flowers are up to 20 mm across and bloom from June to August.

Feverfew is native to Eurasia, particularly the Balkan Peninsula, Anatolia and the Caucasus. It is now found in the rest of Europe, North America and Chile. 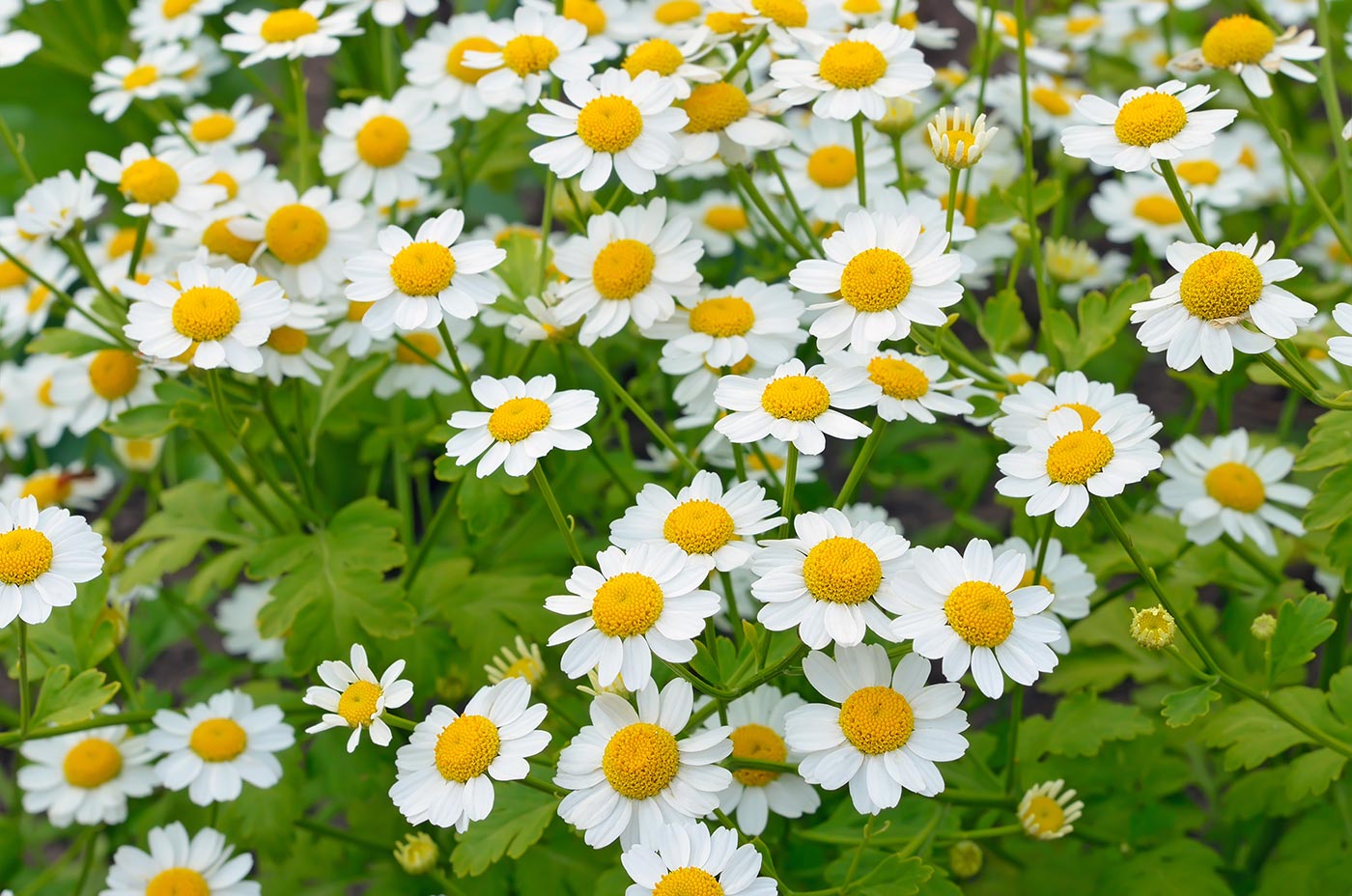 Feverfew is a herbaceous perennial plant that is a member of the daisy family Asteraceae. Its leaves are a light yellowish green and vaiously pinnatifid. Its daisy-like flowers are up to 20 mm across and bloom from June to August.

Feverfew is native to Eurasia, particularly the Balkan Peninsula, Anatolia and the Caucasus. It is now found in the rest of Europe, North America and Chile.

Parts Most Frequently Used: Aerial Parts of the Plant

Caution: Generally considered safe when used appropriately for not more than four months at a time. It can cause allergic reactions, including contact dermatitis. Some people may experience nausea, diarrhea, gas, vomiting or abdominal cramping. It is not recommended for pregnant women. The herb may interact with blood thinning medications.

History/Folklore: With a long history of traditional use, feverfew has been documented as far back as the first century AD by the Greek physician Dioscorides, as being useful for treating inflammation. The Greeks called it pyrethron, from pyro, meaning “fire” which is a reference to the hot taste of the root. They also used it treat “melancholy” a condition associated with persistent headaches and long term depression. It is used to treat fevers, headaches, migraines, arthritis, allergies, asthma, nausea, and vomiting.

A study conducted in Great Britain of 270 people suffering from migraines found that more than 70% felt better after taking an average two to three leaves of feverfew a day.

A study published in Clinical Drug Investigation, found that using a combination of white willow bark, which contains salicin the compound used to make aspirin, and feverfew was effective in preventing migraine headaches safely.

A story from the U.K. tells of a Welsh doctor who used it to end a 50 year struggle with migraines. She said she ate three leaves a day for a period of 10 months, and the migraines disappeared forever. The incident is said to have triggered multiple studies, some of which confirm the herbs ability to effectively prevent and treat migraines.

A typical recommended dose of powdered feverfew for treating arthritic pain and inflammation is 100 to 125 mg. It is considered to be a natural alternative for effectively treating rheumatoid arthritis.

A decoction of honey and feverfew is said to be good for coughs, wheezing, shortness of breath, and asthma. As a tea, 1 to 2 teaspoons per cup of boiling water is used and allowed to steep for 3 to 10 minutes. Typically 2 ml was recommended 2 to 3 times a day as directed. Otherwise, 6 to 12 g per day is a common recommended dose.

Feverfew helps to fight fevers by promoting sweating and eliminating toxins from the body.

Used externally as a wash, feverfew is effective for treating inflamed and itching skin conditions such as psoriasis and dermatitis. It is considered especially effective for treating redness. Even extracts with the compound parthenolide removed showed potent anti-inflammatory effects useful for soothing inflamed, irritated, red, itchy skin conditions.

There is some evidence that long term use of feverfew followed by abrupt discontinuation of the herb may cause withdrawal symptoms that include rebound headaches and muscle and joint pain.

The constituent parthenolide has been shown to induce cell death in some cancer cells and to be able to potentially target cancer stem cells. The same compound is attributed with having analgesic, antispasmodic, and anti-inflammatory properties. The compound is said to inhibit the release of two inflammatory substances, serotonin and prostaglandins, both of which are identified with triggers migraines. Serotonin triggers the release of histamine, which expands the blood vessels and thereby triggers migraines.

Feverfew can help people recovering from injury or surgery gain weight by increasing appetite. The plant has been linked to hormonal activity that induces hunger.

In India, feverfew is occasionally grown to make ornaments that are then used on Christmas trees.

Feverfew blended with hyssop leaves and rosemary was used to protect against accidents. Sipping the tea or adding it to your bath is said to safely counter any spell intended to cause you harm.

Eating the raw leaves can cause mouth ulcerations and inflamed gums, numbness, and a loss of taste.

Feverfew is a hardy plant with a distinct bitter scent.

In the Victorian language of flowers, feverfew symbolizes fire, warmth, and protection.