Eucommia is a beloved tonic herb in China, used daily to build strength. It is most noted for its ability to ease low back pain, and knee and ankle pain. This includes difficulty with moving the legs due to deficient conditions. The Chinese note that using the herb for long periods of time will make your body grow light and contribute to longevity. In Traditional Chinese Medicine (TCM), it is a primary herb for tonifying Kidney Yang functions. It is known both as a powerful Yang and Jing tonic herb. Known for profoundly supporting the skeletal and endocrine systems, it can be used to balance Yin and Yang making it useful for either men or women, young or old.

Watch a short video, from Ann Christensen, Founder and Creator of White Rabbit Institute of Healing™ – Famous for Treating Low Back Pain.

Below is an overview of eucommia​, combining the best of Western Science, Oriental Medicine, Traditional Chinese Medicine (TCM), Shamanism, Folklore, and a wide range of healing modalities. Gain a balanced and thorough understanding of the healing properties of eucommia.

How to take FULL advantage of Eucommia's healing powers... 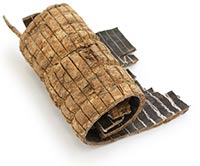 JOIN ME in an exploration of the healing herb, Eucommia (Du Zhong). Explore the benefits and applications of Eucommia, from Eastern and Western perspectives, and so much more!

Medicinal Uses: Kidney Qi Deficient conditions and invasion of Cold Damp, sore, weak and painful lower back, knees and ankles, Fortifies the Sinews and Bones, fatigue, frequent urination, dribbling, genital Damp itching, counters stress, promotes circulation, especially when the person has weakness in the Sinews and Bones, sexual tonic for men and women, slows ejaculation, promotes healing of damaged tissues, safely regulates and reduces high blood pressure. Cold Kidney Deficiency patterns with bleeding during pregnancy, prevents miscarriage when the fetus is restless, or when the woman is suffering from significant back pain with signs of Deficiency. Strengthens the Will. Protracted use is said to make the Body light and slow aging.

The tree can grow up to 60 feet tall. It is unique in that there is only one species in the entire genus Eucommia and only one genus in its plant family Eucommiaceae. It is also the only latex-producing tree natural to cold-tolerant temperate climates. The leaves are deciduous and arranged alternately. They are simple ovate with a serrated margin. If torn the leaves will ooze latex from their veins that can solidify like rubber, holding the two torn parts together. The fruits ripen between June and November and are winged samara with one seed, very similar to elm tree samaras.

Native to central China, it is now grown as a beautiful ornamental shade tree all over the world in temperate climates.

History/Folklore: The genus name Eucommia means “good gum,” referring to the plant’s latex. The name ulmoides derives from the plant’s leaves resembling those of the elm tree. The Chinese name, Du Zhong is said to have derived from the name of a man who took the herb and became enlightened, therefore the herb was named after him.

The bark is the most frequently used, but the leaves and seeds have been known to be incorporated into formulas.

It is an ancient tree species that dates back between 10-35 million years ago. It is now an endangered species and it remains unclear if any species still survive in the wild. All eucommia is now cultivated for harvest.

Being a flexible tree in nature it is noted by the theory of the Doctrine of Signatures to promote strength and flexibility in the body.

Eucommia bark is considered in Traditional Chinese Medicine (TCM) to be a perfectly balanced Yin and Yang tonic herb. It is mentioned in ancient texts mainly for treating lower back and knee pain. It is said to Supplement the Center, Boost the Essence of Qi, Strengthen the Will and Fortify the Sinews and Bones. Using it for long periods of time is said to make the body light and slower to age.

Eucommia is one of the few herbs in Chinese tonic herbalism that is powerful enough, balanced enough, and broad-spectrum enough that it is often used alone. It is safe, mild, and potent. As a tonic herb, it is often blended with lycium (aka goji) berries, licorice root, atractylodes, bupleurum, and peony.

While eucommia is considered a balanced Yin/Yang herb, it is most often used to treat what is called Kidney Yang deficiency in Traditional Chinese Medicine. One of the best-known formulas and applications of the herb is for treating arthralgia, pain in the lumbar region and knees, with difficulty moving the legs, due to Deficiency.

While it can be used alone, in formulas it is typically used as a supporting herb with a more extensive combination of herbs included in the formula. It is rarely over 10% of a formula’s weight. In TCM, of the herbs that Tonify the Kidney, eucommia is considered the strongest and is gentle in action in Regulating Qi and Blood.

It is often combined with the herb dipsacus to treat injuries. It is said that eucommia promotes the union of separated Sinews and Bones, while dipsacus promotes the knitting of the torn Sinews and broken Bones. Together they are known to be mutually supportive.

Eucommia is an excellent herb for the elderly to help maintain bone health and prevent osteoporosis, ease arthritis pain, and constriction of joints. A study published in 2013 in the Journal of Experimental and Therapeutic Medicine said, “Eucommia was found to demonstrate cartilage-protecting effects in rats with osteoarthritis.”

Eucommia is considered beneficial for post-menopausal women as a protection against brittle bones caused by the decrease of estrogen in the body.

It is said that eucommia is best when divided into two doses that are consumed twice a day. When being used as an energy tonic it is recommended that it be taken in the morning or afternoon.

The bark of the trunk is stripped off the tree in large segments, but never enough to kill the tree. The tree will regenerate new bark in a few months. The trees must be at least 10 years old, and preferably at least 15 years old, for the bark to be suitable.

They are no longer harvested in the wild but commercially cultivated to preserve the species. The bark is only harvested between April and June when the level of the bark’s constituents is at its highest. It is then folded so that the inner bark surfaces are facing together and left for a few days until the inner surfaces turn black. The bark is then dried in the sun with the coarse outer bark being stripped away. The visible white threads are the latex layers found within the bark.

Most products currently sold in America are now made from the leaves to save money as the processing of Eucommia bark is more expensive than harvesting the leaves.

Eucommia is the second herb to ever be described in the 2,500-year-old Chinese text, the Shennong.