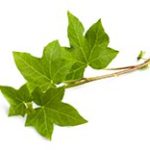 English ivy is a hardy plant that can live to be a great age. It is a member of the ginseng family and has been used by herbalists in both Europe and Asia since ancient times. It is a different plant than Ground Ivy (Glechoma Hederacea) It is widely used today to treat lung congestion and chronic bronchial conditions. Externally it is used to treat burns, infections, parasites, ulcers, swellings and varicose veins.

English ivy is an evergreen climbing vine with glossy, angular leaves. It climbs using fibrous shoots resembling roots that can grow the length of the the stem and attach to surfaces with small disks that allow it to cling to the rough surfaces of bark and walls. If these shoots find soil they become true roots. The flowers of English ivy are small clusters of yellowish-green nearly globular umbels. They have five petals with five short stamens. The smooth pea-sized berries are black or deep purple. Ivy trunks can grow to be a foot or more.

Native to Europe and temperate Asia. It is a hardy plant that can withstand frost. 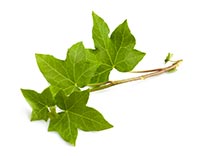 Caution: The whole plant, including the berries, is poisonous so use internally with caution. Some folks may be allergic, so discontinue use if you experience upset stomachs or develop a rash. Not recommended during pregnancy.

History/Folklore: Historically the plant was held in high esteem with the leaves being used to create the poet’s crown and the wreath of the Greek god Bacchus as it was believed that binding the brow with ivy leaves would prevent intoxication.

Greek priests presented an ivy wreath to newly married couples as a symbol of fidelity. The plant is dedicated to the Greek god of wine, Dionysus, who is depicted wearing a wreath of ivy. An old Greek legend tells the story of a young girl dancing herself to exhaustion before Dionysus and falling to the ground dead where upon she turns into ivy and continues to grow entwined with grape vines as a symbol of her love for Dionysus, the god of wine.

The Druids considered ivy the female counterpart to the masculine holly plant. Combined with mistletoe, these three plants were traditionally used to decorate homes during the Christmas season.

English ivy has been used to treat the liver, spleen and gallbladder disorders, including gout, arthritis, rheumatism and dysentery.

In the past, the leaves and berries were taken orally as an expectorant to treat coughs and bronchitis and a water infusion of ivy leaves was used as a wash for sore and watering eyes.

Small doses taken internally are said to dilate the blood vessels and large doses are said to constrict them. It is also said that English ivy breaks down red blood cells by releasing their hemoglobin so use carefully and under medical supervision.

Used as a poultice, English ivy treats swollen glands and chronic leg ulcers. (Mix fresh ivy leaves 1:3 with linseed meal). Another good recipe for an externally used compress is adding a few drops of tincture to salt water, which is a good cure for poison ivy.

To be used externally only, a cold extract formula recommends using 1 tsp of ivy leaves with 1 cup of cold water and letting it stand for 8 hours. A common recipe for infusions uses 1 large teaspoon to ¼ cup of boiling water and let steep for ten minutes.

English ivy is a symbol for fidelity and propriety.

In the garden, English ivy is considered highly invasive and difficult to eradicate, though it is valued for attracting wildlife as the flower’s nectar feeds over 70 species of insects and the berries are eaten by at least 16 species of birds. The leaves provide shelter for small animals and birds, and even deer have been known to enjoy eating the plant’s leaves. English ivy can injure trees that it grows on by stealing nutrients from the tree. The plant’s flowers abundant nectar is used by bees in the late autumn when other nectar sources are scarce.

Growing on the sides of buildings, it can provide insulation and protection from climatic conditions. It dries the soil and can prevent wet walls. It can also be a problem if not properly managed as it grows quickly and its fibrous roots can invade gutter and roof-spaces, lifting tiles, causing damage as well as providing a home for mice and other small creatures.

Some studies indicate that English ivy extract may have anti-cancer and antioxidant properties.

The whole plant, including the berries, is poisonous. While English ivy can be used very effectively internally, it is generally only used externally to treat skin problems.

English ivy has been used as a natural treatment for scabies, lice and sunburn.