Dendrobium is an ancient Chinese Tonic herb that has been used by Chinese Taoist monks to promote longevity and improve health, and build stamina. Dendrobium (genus of orchids) is used to increase the sexual fluids in both men and women and is excellent for relieving thirst and dry mouth. It is one of the 50 fundamental herbs of Traditional Chinese Medicine.

Below is an overview of dendrobium, combining the best of Western Science, Oriental Medicine, Traditional Chinese Medicine (TCM), Shamanism, Folklore, and a wide range of healing modalities. Gain a balanced and thorough understanding of the healing properties of dendrobium.

How to take FULL advantage of Dendrobium's healing powers! 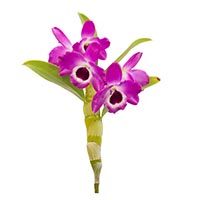 Also Known As: Shi Hu translates as “bushel of stone.”

Dendrobium nobile is a genus of orchids that now contains some 1,200 species. Its blooms are variegated in color, shading from white to pink and purple. It has strap-shaped, persistent leaves and blooms every winter and spring.

Native to Southern China, Hong Kong, Taiwan, India, and other temperate and tropical Asian regions, it occurs in lowland and mountain forests, often on mossy limestone rocks. It often grows well near pear or peach trees.

Caution: Considered safe. This herb can cause Dampness so it is not recommended for cases of abdominal distension due to Damp. Overdosing can cause convulsions.

History/Folklore: Good quality dendrobium is said to be shiny, golden in color and pliable. It is the white pulpy insides that contain the tonic properties. Both the flowers and stems are edible. In Thailand, they are deep fried and eaten as snacks. In Nepal, the flowers are pickled. It is well known as a Lung, Stomach, and Kidney Yin tonifying herb.

True Dendrobium (Shi Hu) is considered to be “true shi hu” and is the highest quality of dendrobium available. Often in the market place it is substituted with You Hua Shi Hu (Ephemerantha fimbriata), another plant in the orchid genus that has similar properties as true shi hu, but is considered less potent and effective. It is also therefore more expensive than its substitute. Products marked “wild” are often actually cultivated as the plant is endangered and illegal to wild craft, so buyer beware!

Dendrobium is especially noted for being a Kidney Yin tonic. The Chinese Taoists used it as a daily tea to promote longevity and help build Jing (Essence). Restoring Kidney Jing strengthens the whole body. It is said to increase the sexual fluids in men and women as well as increasing saliva. Peking Opera masters have used dendrobium tea to protect their throats and voice.

Dendrobium is considered a perfect herb for those entering the healing arts as it is said to provide “healing energy” itself, helping healers to replenish themselves after and during healing practices.

In Taoist literature, dendrobium is described as the first of nine “celestial herbs” with powerful healing benefits. Considered Yin in nature, it helps to moisten the stomach, lungs, and replace Kidney Yin Jing. It is a tonic herb used to treat deficiency of one of the “Four Treasures” (Qi, Blood, Yin and Yang). As a Yin tonic, dendrobium is heavy and moist in nature.

Dendrobium and Licorice Tea is a classic daily tea made up of four or five pieces of licorice to double the amount of dendrobium. Simmer for about twenty minutes and enjoy daily.

Dendrobium helps moisten and nourish the skin preventing dryness and Natives of the Himalayas use dendrobium to treat hot, red eye disorders.

The compound dendrobin, found in dendrobium, has been shown in research to have anticancer properties.

Dendrobium (orchids) are long-lasting and elegant plants. In Ancient Greece they were a symbol of fertility and virility. Eating the flower’s large new orchid tubers was said to insure the birth of a baby boy. Eating small orchid tubers would help you give birth to a baby girl.

In Victorian England orchids took on a mantle of luxury and delicacy. They are a symbol of perfection and beauty. In Ancient China the flowers were a symbol of many children, refinement and innocence.

Growing dendrobium at home can eradicate pollutants and toxins from the air creating a clean environment.

When the life cycle of the mother plant ends, dendrobium produces offshoots that continue the life of the plant.

The Aborigines consider dendrobium to be emergency bush food.

How to use Dendrobium to take FULL advantage of it's healing powers!