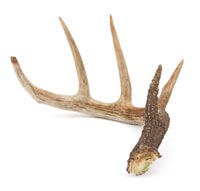 Deer Horn Velvet has a long history in China as a longevity herb, a strengthening herb and a male aphrodisiac. It is considered a key herb for tonifying Yang and Kidney deficiencies. In Hindu mythology the goddess Saraswati takes the form of a red deer called Rohit. As she is the goddess of learning, learned men used the deer skin as clothing and mats to sit upon. To this day, it is an important emblem of Hungary, a multi-antlered stag with its head turned back over its shoulder. Deer remain one of the oldest shamanic references in virtually every culture, as all cultures hunted and used every part of the deer as either food, clothing, medicine, glue, shoes, weapons, and more.

Below is an overview of deer horn velvet, combining and interpreting the best of Western Science, Traditional Chinese Medicine (TCM), Shamanism, Folklore and more. Gain a balanced and thorough understanding of the healing properties of deer horn velvet.

Harvested in summer to late autumn when a male over three years old starts to have new velvet. Found in forests, mountains, and steppes of Northeast China. Now raised in captivity on farms. Most of the worlds Deer Horn Velvet comes from red deer and elk (or wapiti). New Zealand is now one of the world’s largest producer of Deer Antler Velvet. Canada and America, due to the size and quality of their Elk Deer Horn Velvet, are the major suppliers for this variety of Antler Velvet.

Parts Most Frequently Used: Velvet of young deer antler. The antler of the mature deer can also be used, it is called, Cornu Cervi.

Caution: Begin using at low dose and raise slowly, it can be very warming. It can cause dizziness and upset the stomach in large doses. Do not use if there is Heat from Yin Deficiency or Heat in the Blood, or has warm-febrile disease.

History/Folklore: Deer horn is considered a general tonic that increases appetite and improves sleep. It increases oxygen uptake in the brain, liver, and kidneys when fed to rats. It is used locally in powder form to heal ulcers and wounds, including fractures. Deer horn has a slight diuretic effect on the kidneys. Cornu Cervi, the antlers of mature deer, are slightly salty and warm. While weaker then Cornu Cervi Parvum (velvet of young deer antler), Cornu Cervi has similar functions and is cheaper to purchase so it is often used a substitute. Deer Horn Velvet is used to improve athletic performance as it boosts strength and endurance. It improves the immune system, countering the effects of stress and promoting rapid recovering from illness. Deer horn is also used at the onset of winter to prevent infections and illness. It is used to sharpen mental skills, protect the liver from toxins and stimulate the production and circulation of blood. It increases the red blood cell count in blood, aiding and preventing anemia. The hormonal substances in Deer Horn Velvet stimulate gastrointestinal mucosa, if improperly used this can cause stomach upset.

Deer horn iconography, symbolism and mythologies are surrounded and infused the power of deer, their deer antlers and therefore Deer Horn Velvet. In some Scottish and Irish tales, deer are seen as the “fairy cattle.” In Ireland, “the Old Woman of Beare” lives on an island off the coast of County Cork and takes the form of a deer to avoid capture, herding her deer by the shore to keep them safe. Saint Giles, a Catholic saint from France, lived as hermit for many years and is often depicted with a deer as a companion and symbol of gentleness. The Ottoman, Germanic, Hindu and Islamic cultures all have deer and stag mythologies. In Greece, a deer is particularly associated with the goddess Artemis in her role as the virgin huntress. For the Huichol peoples of Mexico, the “magical deer” is the symbol of the power of maize to sustain the body and of peyote cactus to feed and enlighten the spirit. The deer is a symbol of light, flexibility and humor. In Japanese Shintoism, the deer is a messenger to the gods. The Hebrew word “keren” means both horn and power. Ancient gods and super beings had horns. Kings would attach antlers to headdresses as a symbol of strength, supremacy, sovereignty and regal dignity. Stag antlers have also been a symbol of cuckholds. And they have been a symbol of mental and spiritual strength. The deers antlers shape is said to represent the World Tree becoming a symbol of where earth, man and the heavens meet and connect. As the antlers reach up above the head they symbolize the spiritual energy connecting one to the heavens. The French word for antlers “bois de cerf” literally translates as “wood of the deer.” There is a mystical connection between the deer, especially flying deer, and the early kings of France. Flying deer are, of course, also associated with Santa’s reindeer, who fly him all around the world to deliver gifts to good children during the winter holiday Christmas.

Deer Horn Velvet is considered one of the “big three” ultimate herbs of China (Ginseng, Reishi Mushrooms and Deer Horn).

Deer Horn Velvet is especially famous as an herbal aphrodisiac for men.

As it improves muscle tone and strength, some consider deer horn velvet to be a natural alternative to synthetic steroids.