Despite safety concerns, cyclamen has been used to treat nervous emotional states, digestive disorders, and menstrual disorders. The leaves are edible, but the roots and flowers can be toxic causing nausea, vomiting, and diarrhea. Used as a nose spray the herb is considered safe and effective for treating the facial aches caused by sinusitis. The two species commonly used as herbal medicine are Cyclamen hereraefolium and C. purpurascens.

Below is an overview of cyclamen, combining the best of Western Science, Oriental Medicine, Traditional Chinese Medicine (TCM), Shamanism, Folklore, and a wide range of healing modalities. Gain a balanced and thorough understanding of the healing properties of cyclamen.

How to take FULL advantage of Cyclamen's healing powers... 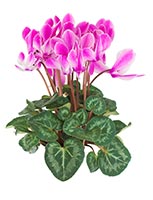 JOIN ME in an exploration of the healing herb, Cyclamen (Xian Ke Lai). Dive deep into the benefits and applications of Cyclamen, from Eastern and Western perspectives, and so much more!

There are eight members of the genus and 19 plant species. Cyclamen is a member of the Primrose family. The tuber is turnip-shaped, brown, and fibrous. The flowers are white or rose-colored and appear before the leaves. They are placed singly on fleshy stalks about 4 to 8 inches high.

Generally, cyclamen is considered a native of Italy. The eight members of the genus are spread over Southern Europe, North Africa, and Western Asia. It likes hedge banks and copses.

Parts Most Frequently Used: Root or Rhizome when the plant is in flower, Early Spring Leaf edible

Caution: Cyclamen is a powerful purgative that improperly used can cause nausea, diarrhea, spasms, and even death. Used externally, it remains powerful but considerably less toxic. Its use as a nose spray in proper doses is considered safe and effective.

History/Folklore: Cyclamen has drastic cathartic and purgative properties that can cause intestinal inflammation, cold sweats, spasms, convulsions, violent vomiting, and even death. Despite these effects, it has long been used by local people for treating menstrual disorders, nervous emotional states, and digestive disorders. The toxic effects of the herb can be lessened by drying the tubers and only 8 to 10 grains, blended with gum or ointment, are used as an external rub.

Dioscorides, a 1st-century herbalist and healer, recommended the herb as a remedy for poisoning and to promote birth. Pliny the Elder, reported that it was used as a poison for arrowhead tips. The 17th century English herbalist, Nicolas Culpeper indicated the herb’s application for accelerating the birthing process, aiding the expulsion of the afterbirth, and inducing menstruation. It was also a traditional remedy for dropsy (edema).

As a laxative, the plant’s juice from fresh tubers was applied externally to the abdomen.

Research has shown that using a nose spray containing cyclamen every day for about 15 days may decrease face pain caused by sinusitis. It is generally considered a safe approach for using cyclamen.

Tubers used to make tinctures are generally harvested in the early spring, or during the rest period of the plant. Some recommend only using the tubers of greenhouse plants. The tincture is used to arrest extreme vomiting caused by vertigo, a tendency to faint, inability to walk straight, tenesmus, and diarrhea.

A study published by the Carbohydrate Research journal measured in vitro anti-inflammatory properties of cyclamen indicating that the saponins in the plant may indeed regulate inflammatory responses.

The compound cyclamin that is found in the plant, is what causes the tubers to be poisonous.

The fresh roots are harvested when the plant is in flower.

The name sowbread derives from the tuberous roots having been food for wild swine. The juice is said to be poisonous to fish.

The name of the genus derives from the Greek cyclos (a circle), reflecting either the reflexed lobes of the corolla or from the spiral form of the fruit stalks.

A homeopathic tincture made from fresh root can be applied externally as a liniment over the bowels to purge the intestines. The variety C. Europaeum is used for the making of homeopathic remedies known as cyclamen. It is used to treat digestive complaints, emotional disturbances including unwarranted feelings of guilt and anxiety of conscience. In this form, it is also used to treat headaches, vertigo, and visual disturbances.

There are writings that indicate that baked sowbread was made into little cakes and used as an aphrodisiac, causing a person to fall violently in love.

An ointment known as “Ointment of Arthainta” was traditionally made from the fresh tubers and rubbed on the umbilicus of children for expelling worms.

Fresh cyclamen tubers are a favorite food of swine and hogs, hence the common name, “sow-bread.”

An ointment made from fresh cyclamen roots was rubbed on the abdomen to promote emesis (vomiting) or to expel worms in adults.

Find out how to safely and effectively use this healing herb. Dive deep into Eastern and Western perspectives about HOW and WHY this herb works. Includes uses, benefits, recipes, essential oils, gardening tips, and much, much more.