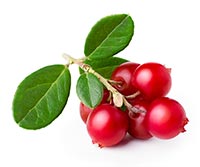 Unsweetened cranberry juice has been used for centuries to help protect the urinary system because it can help fight against bacterial infections in the bladder and urethral mucosa. Cranberry juice turns the urine acidic helping to prevent the formation of alkane stones in the urinary tract. Cranberries have one of the highest oxygen radical absorbent capacities among edible berries, making them an excellent protector from cancer causing free radicals in the body. Cranberries were considered a symbol of peace by the Native American Delaware Tribes.

The plant can be described as an evergreen, dwarf, creeping shrub or a trailing vine. It belongs to the family Ericaceae, which also includes heather.  Cranberries are related to blueberries, bilberries and lingonberries. The berries are larger than the leaves of the plant and are initially white, turning a deep red when they are fully ripe.

Cranberries like acidic sandy bogs and grow all across the temperate and cooler parts of Europe and North America.

History/Folklore: Half a cup of cranberries contains only 25 calories.

Because bacteria does not thrive in acidic environments, the increase in acid in urine from eating cranberries is another reason they are helpful for preventing urinary tract infections (UTIs).  One in five women will develop a UTI during her lifetime, it is a far less common disorder in men.  Most infections are caused by one type of bacteria, E. coli. Recent studies have shown that unsweetened cranberry juice not only increases the acid in urine, but it can also reduce the ability of E. coli to adhere to the lining of the bladder and urethra, reducing the chance for urinary tract infections (UTIs).

Another study found that cranberry extract inhibits an enzyme that has been associated with reducing the risk of cancer.

The name “cranberry” comes from early Dutch and German settlers, who called it “crane berry” because in the spring the flower’s petals twist back resembling the neck, head and bill of a crane.

Cranberries were carried on sailing ships because they were easy to preserve and helped prevent scurvy.

Cranberry juice can be used to make a natural dye for rugs, blankets and clothing.

98% of the world’s cranberries are cultivated in the northern U.S. and Canada. The cranberry is one of only a handful of fruits native to North America, the Concord grape and blueberries are two others.

During WWII about one million pounds of dehydrated cranberries were used a year to help strengthen immunity and prevent scurvy.

Due to cranberries bitter and sour taste, juicing and powdering for capsules, are the most popular preparations.

Cranberries are sometimes added to wine, but as they do not ferment as naturally as grapes, they are not used in the traditional wine-making process.