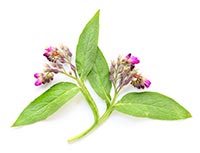 Comfrey has a long history due to its ability to heal internal and external wounds.  Traditionally, it has been used to heal wounds, sprains, and broken bones. Today, it is mostly used externally due to the presence of a toxic alkaloid. This alkaloid can seriously harm the liver if used in large does or incorrectly. Used externally, it is a wonderful herb for healing bones, hence the common name “Knitbone” or “Boneset.” Comfrey has been used by peasants and gypsies as a healing herb and a spring tonic to feed horses. It is an important plant in organic gardening for its ability to condition soils.

Below is an overview of Comfrey, combining and interpreting the best of Western Science, Traditional Chinese Medicine (TCM), Shamanism, Folklore and more. Gain a balanced and thorough understanding of the healing properties of Comfrey.

Comfrey is a member of the Borage or Boraginaceae family of plants (along with forget-me-nots). It contains about 35 different species. Comfrey has large, rough, hairy, and lance-shaped leaves with whitish, pink, or purple flower spikes that have a slight heliotrope like curl, typical of this family of plants. Comfrey has a long tap root that can grow to up to 6 feet long. The stems can grow to be 2-3 feet high. They are hollow and angular. The leaves decrease in size the higher they grow up the stem. The fruit consists of four shining nutlets and that adhere to the receptacle of the base. The flowers start blooming at the end of April and early May.

Comfrey is native to most of Europe and various regions in Asia, Kazakhstan, Siberia and Turkey. It is commonly found on the banks of rivers and ditches and watery places in general. Comfrey is considered a commonly found weed in temperate northern latitudes.

Caution: Do not use when nursing. Caution using on broken or abraded skin lesions.

History/Folklore: Comfrey has been used since Roman times. The plant’s name, “comfrey” is derived from the Latin “con firma” meaning “grow together” referred to the plant’s purported ability to knit bones back together and the Greek word, “symphyo” which is the root of the generic name, Symphytum which means “to unite.”

Comfrey is an example of an herb that the Native American Indians excelled at using. It was introduced to them by early European pilgrims. The Native Tribes quickly expanded the plant’s usage beyond the European’s usage, thereby highlighting their superior ability and skill at using herbs compared to the Europeans who ended up learning these new applications from the Native Americans.

Comfrey contains toxic alkaloids. The parts used, species and time of harvest all impact the level of possible toxicity. There exists a large body of documented and known traditional usage that supports the herbs safety and efficacy when used properly. Russian comfrey (S. x uplandicum) and prickly comfrey (S. asperum), have the highest levels of the pyrrolizidine alkaloid which can be toxic. The roots have 10x higher amounts of the alkaloid than the leaves.

Comfrey has been recommended by the famous herbalists from Dioscorides (A Greek pharmacologist and botanist from the 1st Century) to Paracelsus (a 15th century Swiss physician and alchemist) to St. Heldegard of Bingen (A nun and herbalist born in 1098 C.E.) as herb to heal wounds and broken bones with.

Comfrey baths were common during the Middle Ages and were famous for healing bone injuries and wounds.

In Ireland, comfrey is eaten as a cure for poor circulation and thin blood.

The entire plant is emollient, astringing and vulnerary, however the root is also nourishing and restoring. Its mucilage content makes it excellent for treating irritated, dry conditions as well. And its cooling abilities help calm heat, fevers and inflammation.

While generally recognized as a European herb, comfrey has been in Chinese medicine for over 2,000 years. Where it has been used as a medicine and a green vegetable. In the edible plant category, comfrey is ranked just behind soya beans for protein content. As a member of the Borage family it has the same faint cucumber flavor that borage has. Prepared correctly it is said to taste like endive or asparagus. Only the tender young leaves can be used to cook with as the fine hairs on the leaves become quite coarse, hard and unpalatable as they age.

It is easy to over cook comfrey but it is not good raw either. It can be added to dishes with other leafy greens, onions and tomatoes or stews.  It also makes a nutritious addition to veggie juices. Parsley, lemon balm, mint and caraway seed all mix well with comfrey. Simply chop up 2-4 cups of the young tender leaves and add it to soups, stews, and leafy green veggie dishes.

Comfrey’s demulcent and mucilaginous properties help it to treat lung problems including whooping cough. In China, comfrey is considered to be nutritive, cooling and moist.  It is described as a Yin tonic that is used to heal wounds. Due to concerns for the presence of the toxic pyrrolizidine alkaloid, the herb rehmannia (Rehmannia glutinosa) is often used as a substitute as it has similar properties.

Comfrey is very similar to marshmallow for its emollient properties and is in some cases preferred as an ingredient in formulas containing multiple herbs for treating diarrhea and dysentery.

The herbalist, Mrs. Grieves recommends a decoction made by boiling ½ to 1 oz. of crushed root in 1 quart of water of milk with several cups taken per day to treat diarrhea.

It is recommended in teas and decoctions to treat complaints of the lungs including consumption and coughing up blood from the lungs.

Comfrey is also made into a tincture used by homoeopaths. It is also used in many cosmetic and dermatological preparations.

To use for wounds and healing bones let leaves mush up in hot water, squeezing out excess fluids and then wrap several handfuls of the hot leaves in a clean cloth.  Apply the pad to the affected area, while the pad is comfortably hot, but not scalding and then wrap in a thick towel to keep the heat in. The warmth enhances the healing effects of the constituent allantoin.

Comfrey is often grown in gardens as an ornamental plant. But, be aware, once introduced, it can be hard to eradicate. Comfrey, especially the Russian varietal (S. x uplandicum) is an important herb in organic gardening. It is used as a fertilizer and compost activator. As it produces huge leaves making it a nitrogen hungry plant. It is a wonderful companion shrub to trees and other perennials as tests have confirmed that soil nutrients increase in the presence of comfrey. A liquid fertilizer of comfrey leaves can be made by either rotting the leaves in rainwater for 4-5 weeks to produce a ready-to-use “comfrey tea” good for your garden. Tomatoes, peppers, cucumbers, squash and flowers all benefit from comfrey’s high potassium content. Comfrey has a lifespan of 20+ years.

Adding animal manure to the soil helps it grow. It is also one of the few plants that can handle the application of fresh urine diluted 50:50 with water, which if added too frequently can increase salt levels in the soil killing off important worms. The plant can be harvested 4-5 times a year. Be sure to wear gloves as the hairs on the stems and leaves can be irritating to the skin.

Leaves and buds are harvested when the flowers are starting to bud. The toxic pyrrolizidine alkaloid content varies depending on time of harvest.  It is highest in the early spring and is found to have much lower levels when harvested in the later spring. The long tap root has the highest levels of the alkaloid. The root is harvest in the spring or fall. Roots that are left behind will likely re-bloom. The leaves have a high moisture content so will take longer to dry than other herbs. Be sure the leaves are crumbly before you store them, as any remaining moisture can cause mold.

Sometimes comfrey leaves are confused with foxglove leaves which they somewhat resemble. However, comfrey leaves have both smaller veins that do not extend into the wings of the leaf-stalk, as well as isolated stiff hairs on the surface of their leaves.

Comfrey is used magically to protect against theft and as a powerful protecting agent for travelers, especially those traveling to foreign places.  Simply place a leaf in your luggage to be protected. It was worn by witches to protect against the “burning times.” Comfrey honors the Crone aspect of the Goddess.

Cattle, pigs and rabbits will all eat comfrey leaves.

Use All 35 Species of Comfrey

The 35 different species of comfrey can all be used interchangeably as they all have similar properties and constituents.

The constituent, allantoin, aids granulation and cell formation hence comfrey’s use to heal bones and wounds.

Comfrey is said to be the guardian of travelers.