Often used as a gentler alternative to the stronger ginseng, codonopsis has a long history as being an excellent lung, blood, muscle, and overall body tonic. Used in China by nursing mothers to increase healthy milk production and for staying strong and healthy.

Watch a short video, from Ann Christensen, Founder and Creator of White Rabbit Institute of Healing™ – Key Connector Between the Lungs and Spleen.

Below is an overview of codonopsis root, combining the best of Western Science, Oriental Medicine, Traditional Chinese Medicine (TCM), Shamanism, Folklore, and a wide range of healing modalities. Gain a balanced and thorough understanding of the healing properties of codonopsis root.

How to take FULL advantage of Codonopsis Root's healing powers! 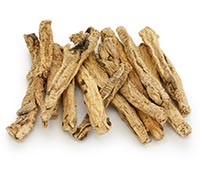 Codonopsis is a member of the Campanulaceae family. There are about 40 different species worldwide, 21 are used medicinally. A perennial plant in the bellflower family with twining stems up to 2 meters long, with bilateral branches, alternately arranged leaves and small branchlets. Solitary bell-shaped flowers occur at the branch tips that are yellow-green with purple spots inside. Roots are carrot shaped or cylindrical. Native to Asia, where it grows in forests, meadows and scrub areas. Most especially grown in Sichuan, Anhui and Jiangsu province.

Codonopsis likes woodland areas. It is native to East Asia.

Caution: Considered safe with a very low toxicity. Traditionally, it is not recommended for use with Li Lu (Black False Hellebore). Very high doses have caused chest pain, throat pain, or dizziness in some people.

History/Folklore: The best quality is said to be thick and purplish red. It is a key herb for gynecological conditions of all sorts. It is often used to restore vigor and stamina. It is considered an excellent anti-aging herb. It helps promote Qi (Energy) and the production of body fluids. It is said this herb can warm the Spleen without being too drying. It will also tonify Stomach Yin without causing pathogenic dampness.

Codonopsis stimulates blood production by increasing both red and white blood cells, it also detoxes blood. Mixed with licorice it is considered a major tonic for those tending toward anorexia.

Codonopsis seems to stimulate the central nervous system and is known for its neuroprotective properties.

Codonopsis is an excellent herb for children. It is mild, yet has powerful strengthening properties, especially on digestive, respiratory, and immune systems. The Chinese have used it for thousands of years to build strong muscles in children. It’s roots can easily be added to soups in the same way you would a carrot.

In China, it is considered similar to ginseng but less strong, less expensive, and not as long-lasting in its effects. Like ginseng it is considered a major tonic herb. Ginseng is from the Araliaceae family, codonopsis is from the Campanulaceae family. These two herbs can also be used together as they have totally different phytochemical profiles. Together they are mutually enhancing herbs. Codonopsis is considered better at reducing adrenaline, and therefore countering stress than ginseng. Ginseng is considered better for treating critical conditions associated with the collapse of Kidney Yang, as it can tonify original Qi. Codonopsis tonifies the Lungs and the Spleen, but does not enter the Kidneys.

Because of its blood building and cleansing abilities codonopsis is said to help skin become elastic, smooth and radiant.

In China, codonopsis is one of the four ingredients of the famous and popular, “Change of Season Soup.”

How to use Codonopsis Root to take FULL advantage of it's healing powers!