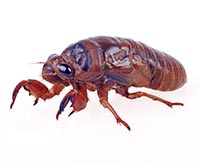 Cicada has a long history in China as a symbol of immortality.  Its image can be seen on bronze vessels dating back to 1500 B.C.  The molt, or outer dried and discarded exoskeleton of the cicada is a common herb included in many Chinese medical formulas for clearing Wind Heat.  The insect itself had no importance, just the discarded shell left behind when it flies away as an adult.  It is often used effectively to treat allergy symptoms, childhood convulsions, fevers, and the early stages of non-erupted measles.

Below is an overview of Cicada (Chan Tui), combining and interpreting the best of Western Science, Traditional Chinese Medicine (TCM), Shamanism, Folklore and more. Gain a balanced and thorough understanding of the healing properties of Cicada (Chan Tui).

Also Known As: Chuan Hua (Translates as the “Flower of the Cicada.”)

Cicadas are a superfamily, the Cicadoidea, of insects in the order Hemiptera (true bugs). There are over 1,300 species worldwide.  Cicadas have prominent eyes, short antennae and membranous front wings. They produce an exceptionally loud vibrating and drumlike song. They live in trees and feed on sap. The best known North American cicada is the species Magicada septendecim, and the Chinese cicada, used medicinally, is the species Cryptotympana pustulata.

They are found worldwide with the majority being found in the tropics.

Parts Most Frequently Used: Molted Exoskeleton of the Adult Cicada

Caution: Cicadas are considered safe, but caution is advised during pregnancy.

History/Folklore: Cicadas are found all over the world, in Argentina there is a famous protest song called, “Like the Cicada” (Como La Cigarra). Their image has been used on coins and vases and they feature in many myths and folktales from all over the world.

Medicinally, it is the Chinese cicada(Cryptotympana pustulata) that is used to make medicine and the insect itself is only used as a food, deep-fried and eaten without its outer dried skin. The Ancient Greeks also ate cicadas as do many contemporary African and Latin American peoples.

The insect cicada, molts or sheds its outer skin once every seven years (some species may wait 13 to 17 years). This molting takes place in the summer and fall when these cast-off shells are then gathered and dried to use as medicine. The cast off, mineralized exoskeleton, is discarded by the living insect on tree trunks and branches as it flies away into adulthood. These dried skins become like shells and are yellowish-brown and semi-transparent. They are made of chitin, protein, amino acids and organic acids.

In China, cicada (Cryptotympana pustulata) is a classic herb used to relieve exterior syndromes and clear Heat from the body. Typical dosing would be 3-6 grams.  It is often used in the early stages of warm diseases presenting with cough and fever, or in the initial stages of measles that are refusing to erupt.

Chinese cicada (Cryptotympana pustulata) is also used to help support sinuses and soothe spring and summer allergy symptoms caused by dust, pollen, environmental factors and molds. The shells act like a kind of body armor shielding the lungs, nasal passages and sinuses from outside irritants.

Medical studies have shown the Chinese cicada (Cryptotympana pustulata) has anticonvulsant effects, sedating actions and aritipyretic effects, especially for the head and legs.

Chinese cicada (Cryptotympana pustulata) is often combined with Mint (Bo He) to further strengthen the herbs cooling effects. When treating infantile convulsions it is often combined with Scorpion (Quan Xie) and Uncaria (Gou Teng). It can be ground into powder and taken with what the Chinese call “yellow wine.” Yellow wine is a made from glutinous rice and wheat.

In Ancient China, cicada were a symbol for immortality and a religious symbol for reincarnation, leaving one’s “old” life or body behind and starting fresh or “new.” The Chinese phrase, “to shed off the golden cicada skin,” refers to the military strategy of using deception to escape danger, especially using decoys to lead enemies astray.

In Ancient China, carved jade cicada were placed in the mouths of the dead as a symbol and insurance of immortality.

Chinese cicada (Cryptotympana pustulata) can be used alone or by itself to help treat the convulsions caused by tetanus.

Chinese cicada (Cryptotympana pustulata) moltings should be whole: head (with two eyes), chest (with wings and a crossed gap), and abdomen (with three pairs of feet). It is important to boil these shells before using medicinally to clean off any residues left on the shells.