A beautiful flower, chrysanthemum is a well-known garden varietal. It is edible and has been used in Traditional Chinese Medicine for centuries to treat respiratory problems, lower blood pressure, and calm nerves. In China, this herb is a symbol of longevity and is associated with legendary healing capabilities.

Watch a short video, from Ann Christensen, Founder and Creator of White Rabbit Institute of Healing™ – Chrysanthemum vs. Chamomile.

Below is an overview of chrysanthemum, combining the best of Western Science, Oriental Medicine, Traditional Chinese Medicine (TCM), Shamanism, Folklore, and a wide range of healing modalities. Gain a balanced and thorough understanding of the healing properties of chrysanthemum.

How to take FULL advantage of Chrysanthemum's healing powers... 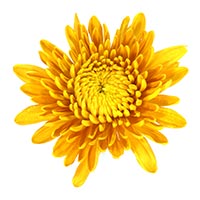 JOIN ME in an exploration of the healing herb, Chrysanthemum (Ju Hua). Explore the benefits and applications of Chrysanthemum, from Eastern and Western perspectives, and so much more!

Chrysanthemum is a perennial flowering plant in the Asteraceae family. It is harvested in late autumn or early winter when flowers reach maximum height. There are 40 valid species with countless horticultural varieties and cultivars. The flowers have many petals and range in color from pale yellow to bright red. Chrysanthemum morifolium has deeply lobed, dark green leaves and large flowering heads.

History/Folklore: Cultivated in China as far back as the 15th century BC, this flower is renowned as being one of the Four Gentlemen in Chinese and East Asian art. Shen Nung (or Shennong), one of these Four Gentlemen, and the second mythological emperor of China is a famous Asian historical figure. He lived around 2695 BC and is considered the father of Chinese Medicine. His search for eternal life caused him to send 24 children on a dangerous journey to a faraway island. It was believed that on the island grew a rare flower, the Golden Chrysanthemum, that would bestow eternal life. The children found and picked this flower, and bringing it back, ensured a long life for Shen Nung who took and used it in tea. Thus began the Chinese reverence for this flower and its use in many teas. It is further identified with longevity because it can bloom through the autumn and even the early winter.

The flower’s name derives from the Greek word for gold (chyros) and antehmon (flower). It became associated with death in European cultures because of its common use as a gravesite decoration.

The Chrysanthemum later spread to other regions, beyond Asia. In 1798, Americans introduced the flower to the horticultural scene in Hoboken, NJ, to grow attractions within Elysian Field.

In Traditional Chinese Medicine (TCM), the white flowers are considered best for nourishing the liver and clearing the eyes and the yellow flowers are better at dispersing Wind-Heat, and therefore are mostly used to treat eye redness and headaches due to externally contracted Wind-Heat. The benefits of the tea build up and increase in your system as the tea is enjoyed over time.

Studies have shown that chrysanthemum contains compounds that are anti-inflammatory and can help treat bone osteoporosis.

Chrysanthemum has both moistening and astringent properties. An unusual combination that invites a broad range of applications. In TCM it is said to nourish Yin and disperse ascending false Yang, causing headaches, red eyes, blurred vision, and aching throat, shoulders, and neck.

Emotionally, chrysanthemum is useful for calming anxiety, opening the heart, and purifying the mind. It is often compared to a “ray of sunshine” or “liquid gold”. It is a gentle tea with powerful grounding and health-promoting abilities.

The compound pyrethrum, found in chrysanthemum, is used in many pesticides. Direct exposure to this compound can irritate the skin or eyes. Chrysanthemum oil is very high in this compound and should be used very carefully.

The flowers, leaves, and stalks can be blanched and enjoyed in salads or as a side dish.

Pyrethrum (a constituent of the flower) is a natural source of insecticide.