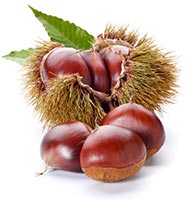 With only 69 calories per ounce, chestnuts are lower in calories than other nuts. Almonds, cashews and macadamia nuts contain 160-200 calories per ounce. However, these other nuts contain 4-7 grams of protein and chestnuts only contain 1 gram of protein. Chestnuts are high in potassium, vitamin C, and folate. They help improve digestion, manage diabetes, and lower blood pressure. Most of the species possess similar properties, qualities and nutritional values. Chestnuts are considered the “grain that grows on a tree” due to their high carbohydrate and low fat content. The leaves and bark can also be used medicinally.

Do not confuse chestnuts with horse chestnuts (Aesculus hippocastanum), a member of the oak family or with water chestnuts (in the family Cyperaceae) both are entirely different plants from chestnut trees (Castanea sativa, C. dentata or C. mollissima).

Below is an overview of Chestnut (Li Zi), combining and interpreting the best of Western Science, Traditional Chinese Medicine (TCM), Shamanism, Folklore and more. Gain a balanced and thorough understanding of the healing properties of Chestnut (Li Zi).

Chestnuts are edible nuts produced by trees and shrubs of the Castanea group which is a genus with eight or nine species. Most of the species possess similar properties, qualities, and nutritional values. Their mature heights can vary from small shrubby plants to the giant trees that were once a part of the American forests. The tree’s bark are smooth when young, with a red-brown color for the American species, and a grey darker color for the European species. Their leaves are simple, ovate or lanceolate. The flowers follow the leaves in late spring and are arranged in long catkins of two kinds. Some have only male flowers and the others carry pollen-bearing flowers. The fruit is contained in a spiny (very sharp) cupule called a “burr” which will contain one to seven nuts depending on the species.

Unlike other nuts, chestnuts are low in phytic acid, a constituent in nuts that binds nutrients like calcium, iron and magnesium, making them unavailable for digestion.

A chestnut honey mask is good for the skin as it reduces inflammation, reduces capillary fragility and protects the skin from UV radiation. This mask protects the hyaluronic acid in the skin and normalizes sebaceous gland secretions.

Boiling a handful of chestnuts in a quart of water until the liquid is reduced by half, then straining makes a good wash for treating chilblains and rheumatic pain. Apply the application to the affected area daily, as hot as possible, and let sit for 10-15 minutes until the pain subsides. Chestnuts are a tonic for muscles, nerves and veins reducing capillary permeability.

The sweet chestnut was introduced to Europe from the Sardis, in Asia Minor; the fruit was then called Sardinian nut. It has been a staple of Europe, Turkey and Southwestern and Eastern Asia for thousands of years. Alexander the Great planted chestnut trees across Europe while on his various campaigns. Until the introduction of the potato, whole communities relied on the chestnut as their main source of carbohydrates. They eventually became known as the poor man’s food and fell out of popularity as a main dietary staple.

Early Christians viewed the chestnut as a symbol of chastity.

In America, the Native Americans relied on chestnuts as a staple food and the trees for lumber, and the tannins were used in the leather industries. In 1904, it was discovered that a blight fungus had developed on some Asian chestnut trees planted on Long Island, NY. Within 40 years, the nearly four billion American chestnut tree population in North America was devastated with only a few clumps of trees remaining in MIchigan, California and the Pacific Northwest amounting to the economic loss of untold millions of dollars and the loss of an invaluable tree. Efforts were started in the 1930s to repopulate the species and this effort continues to this day. The development of the Dunstan chestnut tree, which is a cross of the American and Chinese chestnut trees, has proved to be blight resistant and is helping to bring back the chestnut tree to America. The destruction caused by the original blight remains the largest ecological disaster in American history.

Chestnuts have been part of the Chinese diet since neolithic times. Writings about the chestnut have been found on oracle bones along with mulberry, the apricot, and red jujube. They are considered a very good omen and were planted near homes to insure prosperity and good fortune. For centuries in China, chestnuts were probably the most important nut used in culinary dishes. As fresh chestnuts are highly perishable the Chinese developed several methods for preserving them, including: quick boiling and then dried, cooked in sugar, canned, and pickled in salt or vinegar or both. Chestnuts are popularly added to many poultry dishes.

A popular Chinese custom is for grandmothers to sew chestnuts into the hem of their granddaughter’s bridal dress or to pack them in her clothing to take with her to her new home. They do this to insure an early and easy child birth.

In Traditional Chinese Medicine (TCM), chestnuts are considered good for tonifying the Kidney and supporting digestion. In winter roasted chestnut stands can be found all over the streets of Beijing and other cities in China, where they are a very popular nutritious winter snack famous for their ability to warm the lower body, especially the low back, knees and extremities. They are also used to make soups and stews. The Chinese also ground the nuts up and apply the mash to external cuts and wounds to help stop bleeding.

Traditional Chinese Medicine (TCM) regards chestnuts as “fruit for the kidneys” and good for treating patients with renal diseases. 5-10 chestnuts are popularly eaten every day by the elderly to prevent and treat high blood pressure, heart disease, hardening of the arteries and osteoporosis.

Chestnuts are not eaten raw, but are roasted, boiled, candied, pureed, grilled and steamed.

Chestnuts can also be ground to make a flour used to make baked goods or as a thickener for stews and soups. As a flour it can be a better choice than almond flour as almond flour contains high amounts of fragile polyunsaturated fats that oxidize easily when heated. Chestnut flour is popular in Italy where chestnut bread is commonly made.

Chestnuts are in season from October to March. They add a rich, sweet flavor to breads, soups, cakes and pastas. Chestnut puree blended with butter and whipping cream, and a bit of spice can be used to top desserts or added to main dishes for added flavor.

Chestnut buds are one of the 38 substances used to prepare Bach flower remedies, a form of alternative medicine that uses natural preparations.

Chestnut trees are often grown for ornamental purposes in gardens and along city streets. Many historic cities and regions throughout Europe owe their former wealth to the cultivation of chestnut trees for food and wood. Chestnut wood is beautiful and rot-resistant. The trees are excellent for reforestation and are one of the best trees for wildlife, providing food for squirrels, deer, turkey, bears and other game and non-game species.

The famous, “Chestnut Tree of One Hundred Horses” is found on Mount Etna, in Italy. It is believed to be between 2,000 and 4,000 years old making it the world’s oldest and largest chestnut tree in the world. Legend says that the queen of Aragon and her one hundred knights found refuge under this large tree during a thunderstorm.

Fabric can be made starched from chestnut meal and linen can be whitened with chestnut meal. The leaves and skins of the nuts can be used to make shampoo.

There are several varieties of chestnuts, with Asian and European varieties being the most popular.

Chestnuts are rarely eaten raw. Typically they are roasted and sometimes boiled.

The Chinese name for chestnuts, “Li Tzu” resembles the sound of the words for “favorable” and “sons.” These same-sounding meanings, indicate how revered the humble chestnut is to the Chinese. They were given to the emperor as a tribute food.