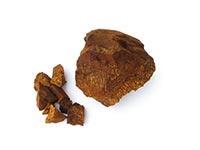 Chaga is an adaptogenic mushroom that can help reduce fatigue, increase mental sharpness, and help fight cancer. It is also reduces blood sugar levels, lowers blood pressure, and reduces cholesterol. Chaga has been a part of traditional folk medicine in Russia, Poland, China, and other Baltic countries for centuries.

Chaga is a fungus in the family Hymenochaetaceae. It is parasitic on trees, especially birch trees. The sterile conk is irregularly formed and looks a bit like burnt charcoal. It is distinguished from other growths by its orange tissue. The fungus causes a white heart rot to develop in the host tree. It’s spores enter the tree through wounds and the white rot decay will spread throughout the heartwood of the tree. Chaga will continue to cause decay within the living tree for 10 to 80+ years. While the tree is alive, only sterile mycelial masses are produced (the black exterior conk).

Chaga is most often found in birch forests of the Northern Hemisphere. 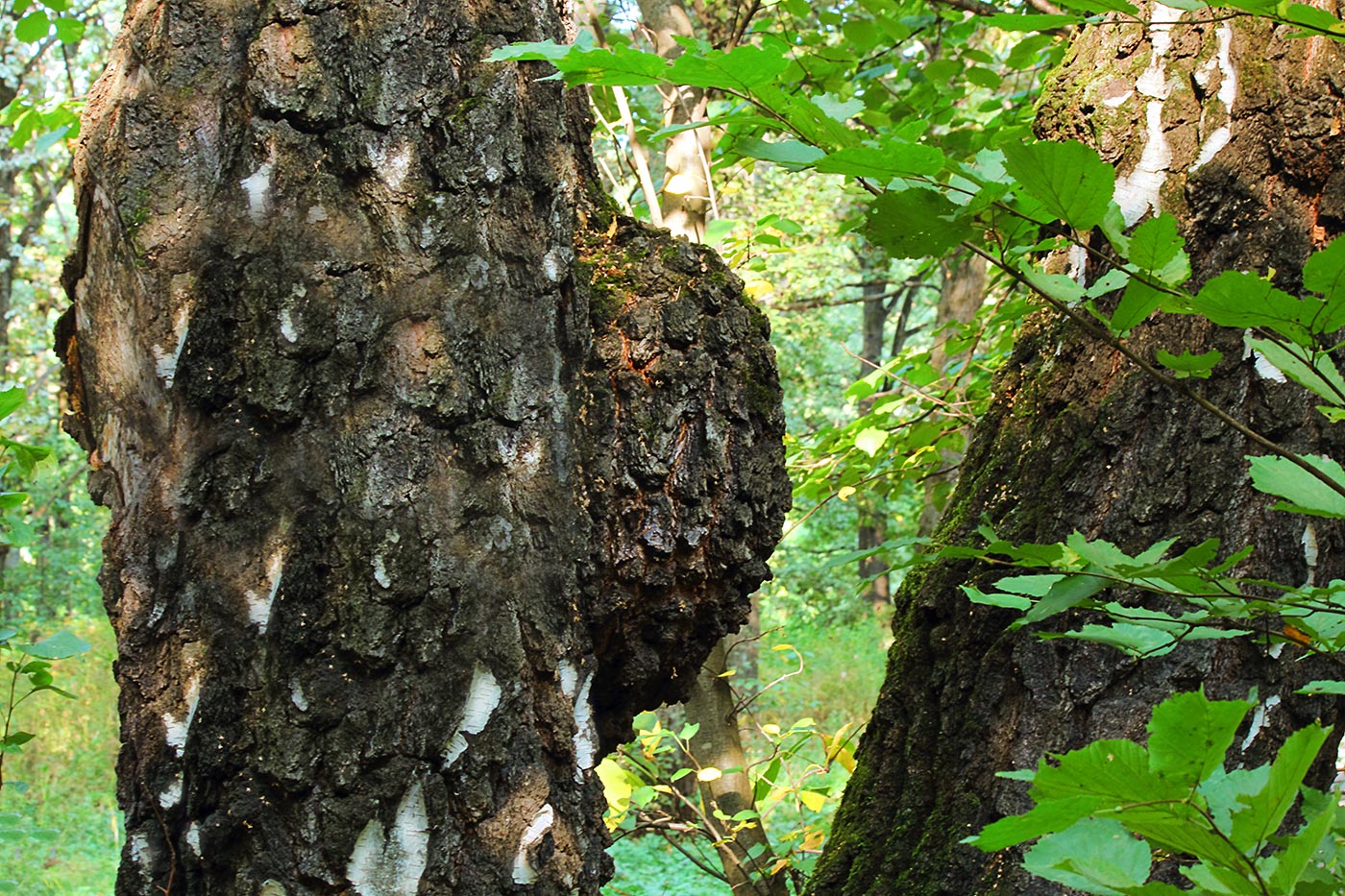 Chaga is a fungus in the family Hymenochaetaceae. It is parasitic on trees, especially birch trees. The sterile conk is irregularly formed and looks a bit like burnt charcoal. It is distinguished from other growths by its orange tissue. The fungus causes a white heart rot to develop in the host tree. It’s spores enter the tree through wounds and the white rot decay will spread throughout the heartwood of the tree. Chaga will continue to cause decay within the living tree for 10 to 80+ years. While the tree is alive, only sterile mycelial masses are produced (the black exterior conk).

Chaga is most often found in birch forests of the Northern Hemisphere.

History/Folklore: Chaga has long been used in Russia and China. In Russia and Siberia, the mushroom has been used as a medicine and in shamanic ceremonies. Russian and Scandinavian scientists have done the most research on chaga, where the herb has been used for centuries. In China, chaga is a revered tonic herb for longevity and health. Chaga is also known for its adaptogenic properties and ability to help treat and prevent cancer. It is also used to promote heart and digestive health, as well as treat red, itchy skin conditions. A study done in Russia of 50 people suffering from psoriasis were given chaga and all got well.

Chaga has been used in Oriental medicine for many centuries and was first documented by the Chinese herbalist Shen Nong, in the first century B.C.E. In Asia, chaga is used to preserve youthfulness, promote health, and encourage longevity. It is known as an excellent kidney tonic herb. Chaga is also used to support Shen (spirit or consciousness). In Japan, the Ainu, brewed chaga for tea to treat stomach disorders as well as using it in powdered form in sacred ceremonies.

Chaga can be an appetite suppressant. It contains fibers that can help a person feel fuller quicker, helping to reduce snacking and thereby aiding weight loss.

The high oxalate content found in chaga may help to prevent the absorption of some nutrients that can be toxic in high doses. Oxalate is also found in spinach and rhubarb.

The bark of birch trees contains betulin, a compound used in cancer treatments. However, when extract from birch trees, betulin cannot be safely used. Chaga absorbs and synthesizes the betulin from the bark and transforms it into a form that is safe for human consumption. Betulin is also being studied for its potential to help fight HIV.

Chaga’s name derives from the Russian name for the fungus, which in turn is said to have been derived from the indigenous peoples of west of the Ural Mountains. It is sometimes commonly called clinker polypore because of its resemblance to slag left after a coal fire, that were called “clinker” when coal fires were common. In Norway, the name for chaga literally translates as “cancer polypore,” referring to the fungus’ appearance and its alleged medicinal properties.

Attempts to cultivate chaga on other simulated hosts than birch trees, have so far resulted in a markedly different production of metabolites, reducing the fungus’ overall healing properties significantly.

Chaga has a hard texture, so it is traditionally powdered and brewed for a long time in hot water making a beverage known as chaga tea or coffee.

Chaga is known to have more antioxidant properties than blueberries.