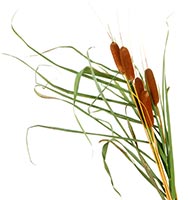 Cattails are a medicine and a food. The pollen is most frequently used as a wonderful herb to stop internal and external bleeding. Used for centuries by the Chinese and Native Americans cattails have been used as stuffing for pillows, to stop postpartum bleeding and as a vegetable in stews and salads. The pollen is high in protein. The plants help regulate the cardiovascular system, by preventing clotting and lowering blood lipids.

Below is an overview of Cattail, combining and interpreting the best of Western Science, Traditional Chinese Medicine (TCM), Shamanism, Folklore and more. Gain a balanced and thorough understanding of the healing properties of Cattail.

T. angustifolia is slightly smaller in size than T. latifolia, both plants have similar structures and properties.

It grows in wet marshes and wetlands.

Caution: Very low toxicity. Due to the plant’s strong hemostatic properties, use with caution during pregnancy.

History/Folklore: Cattail provided Native Americans with food, medicine, and even clothing. The early American settlers similarly, made good use of cattails.  The leaves have been used to weave shoes, mats, and baskets.  Cattail wool from the hairs of the female inflorescence has been used to stuff pillows and to fill shoes in the winter.  The roots have been ground into flour and the white colored shoots at the base of the leaf clusters can be boiled or steamed or sliced and eaten raw in salads.

Cattail pollen is collected in summer, and dried in the sun, ground and sifted into powder. The plants bloom May to July. The young root stalks can be pulled off in early spring and eaten in stir fries and other vegetable dishes.  The young flower heads can be prepared and eaten like corn-on-the-cob.  The pollen is scraped off, dried and used as flour and the roots can be peeled and boiled, or dried and ground as flour.  However, the flour made form the pollen is considered the best.  Be careful to know the condition of the water that you are sourcing your cattail food and medicine from as the plants are amazing at ingesting toxicities out of the local environment.

The jelly that grows between the young leaves has antiseptic properties that make it good to use for wounds, boils and skin infections.  It is also used as a soup thickener.

The leaves can be boiled to use as an external ski wash and the mashed roots can be crushed and used as toothpaste.  The root Powder in a cup of hot water will help stop diarrhea and dysentery.

In China, there is a famous soup called “milk soup of cattail” (Nai Tang Pu Cai).  Its popularity dates back to the Ming Dynasty. Because of its milky white color, crisp texture and refreshing light flavor, it is a dish often served at important meals and festivals. Cattails are a symbol of peace and have traditionally been given as peace offerings between friends and lovers if they have been quarreling.  They are also considered a symbol of prosperity.

The Native American Pueblo Indians associate cattails with water and rain and they are used in there ceremonial rain dances. The Mexican kickapoos associate cattails with water serpents and therefore make special offerings to the snake people before gathering the plants for medicines or food. The Navajo believe cattails protect against lightening and many tribes of the Southwest use the plants pollen as traditional face paint.

Cattails grown in poisoned arsenic water had reduced the poisonous level by 89%.

Cattail is a raw material for manufacturing paper and rayon.

Cattail pollen is rich in protein.

Cattail is an edible crispy wild vegetable, especially the soft white part of the cauloid and the young part at the tip of the cattail roots.

If used in decoction the pollen is usually taken separately, though it can also be placed in a cheese cloth if it is to be cooked with other herbs.