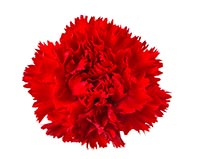 Famous as a symbol of Mother’s Day, carnations are also commonly used in teas to help alleviate stress, depression, and nervousness. The flowers have been being cultivated for over 2,000 years. Carnations are the national flower of Spain, Monaco, and Slovenia. They are edible and wonderful in teas and infusions. Carnations have long been popular for treating stress and urinary tract infections.

Below is an overview of Carnation, combining and interpreting the best of Western Science, Traditional Chinese Medicine (TCM), Shamanism, Folklore and more. Gain a balanced and thorough understanding of the healing properties of Carnation.

There are over 300 species found across Asia, Europe and North America. They are a herbaceous perennial plant with leaves that are grayish to blue-green in color. The flowers produce singly or up to five together in a cyme; they are 3-5 cm in diameter smelling like cloves or nutmeg. It is believed that the original wild carnations were originally a deep dark pink.

It is likely they originated in the Mediterranean region, perhaps in Greece, some say they were also brought back to Europe from other parts of the Middle East by Crusaders.

Caution: Overdosing can cause prolonged contractions of the uterus so not recommended for pregnant of lactating females.

History/Folklore: The Latin name, Dianthus, derives from the Greek language, meaning “flowers of the gods.” The Latin term “carnatio” means fleshiness and the “Caryophyllus” means cloves, referring to the flowers clove-like scent. The original wild species has petals that are ragged, giving rise to another of their common names, “Pinks,” which is also the root of the name, “pinking shears” or scissors.

They were used in the Middle Ages as an inexpensive substitute for cloves, which had to be imported and cost a lot. Steeped in rose water they were a popular Medieval hair perfume.

Used in European folk medicine to ease coronary disorders and nausea caused by seasickness. In the late 17th century, the countess of Dorset was said to have used carnations in her lover potion along with bay leaves, marjoram and lavender. During this same period, the herbalist Culpeper, wrote that carnations, “strengthened the brain and heart.” The petals would be steeped in white wine infused with the petals until they were pale and then strained.

Carnations were used by the Victorians to express love. The Victorian clock of flowers was a secret code used by lovers to communicate a time they could meet at The Ancient Aztecs used carnations as a diuretic, using an infusion of the petals in hot water. They also used a mixture of a teaspoon of petals mixed with a bit of sugar and boiled into a syrup that could be taken every three hours to help relieve chest congestion and lung disharmonies such as coughs and sore throats, caused by colds and flus.

In Ayervedic medicine, carnations were used to ease stomach cramping, promote sweating, as a diaphoretic and to reduce fevers.

Folklore traditions have claimed that carnations could counteract the effects of some poisons, but there is no current research to confirm this.

It is popularly used in Western herbalism to treat urinary, digestive and bowel problems. The old leaves are crushed and used to clear eyesight.

Popularly used in massage oils, carnations are said to promote healing and softening of the skin. Their scent is also soothing and calming. Similar to the herb soapwort, carnation leaves can be boiled in water to make a soothing solution for irritated skin problems. They can be substituted in preserves and syrups for rose petals.

The petals of carnations (but do not the bitter heads of the flowers) are edible and are good in salads and used as garnishes. They have been candied, used in liqueurs and syrups. They can be steeped in wine or used as cake decorations. The petals are surprisingly sweet with a clover to nutmeg scent. Carnations are the secret ingredient in the French liqueur, Charteuse.

In Ancient China, carnation flower tea was widely used to sooth and relax the body and spirit, as well as invigorate Qi or the bodies life force. They are used in China to help expel worms.

The Chinese generally use the aerial part of the plants raw when using carnations for medicines. Good quality will be blue-green without dust or roots.

Carnations symbolize affection, health, energy and the purity of a mother’s love. Traditionally they were given on first
Wedding  anniversaries, worn at weddings, and given on Mother’s Day. Carnations died green are associated with St. Patrick’s Day. The pink carnation is said by Christians to have sprung from the Virgin Mary’s tears, and thereby representing the undying love a mother for her child.

Shakespeare, Chaucer and Spenser all called carnations the gillyflower.

Carnations are used in magical protection spells and to give strength and health. Planting them along your doorway will provide protection and the flower’s scent is helpful for entering trances and doing astral work or entering other realms.

Carnations can be planted in flower beds or containers. They grow from seeds that are sown in early spring about 12” apart. It is recommended the seeds be frozen for 5-7 days prior to sowing. They will only need to be watered once or twice a week, slightly more if weather is very hot and or dry.

Carnations smell a bit like cloves, and are in fact related to cloves as well as the plant soapwort.

Shakespeare coined the word, “incarnadine” which derives from the Italian, ‘incarnardino”, meaning carnation or flesh-colored.