Daily consumption of dark, pure chocolate will lower blood pressure by two to three points. Sprinkling cacao powder on your oatmeal helps your gut produce important microbes that aid the overall medicinal values of cacao. The darker the chocolate the more flavonoids and flavanols it contains.

Watch a short video, from Ann Christensen, Founder and Creator of White Rabbit Institute of Healing™ – Theobromine and Chocolate.

Below is an overview of cacao, combining the best of Western Science, Oriental Medicine, Traditional Chinese Medicine (TCM), Shamanism, Folklore, and a wide range of healing modalities. Gain a balanced and thorough understanding of the healing properties of cacao.

How to take FULL advantage of Cacao's healing powers... 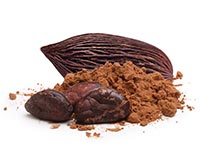 JOIN ME in an exploration of the healing herb, Cacao (Qiaokeli). Explore the benefits and applications of Cacao, from Eastern and Western perspectives, and so much more!​

The cacao tree is a small evergreen tree in the family Malvaceae. Its leaves are alternate and unlobed. The flowers are produced in clusters directly on the trunk and on older branches. This is called “cauliflory.” The fruit, called a cocoa pod, is ovoid ripening yellow to orange and weighs about a pound. Each pod will contain 20 to 60 seeds, these seeds are called beans. The tree bears flowers and fruit after four or five years. A mature tree may have 6,000 flowers in a year, but only 20 pods.

Caution: Cacao and chocolate are considered safe. Note however, that too much sugar, (that can be put in commercial chocolate candies) is not good for you and can cause inflammation, poor teeth and skin, as well as other ailments if too much sugar is consumed.

History/Folklore: Cacao has been cultivated by many cultures for over three thousand years in Mesoamerica. The earliest evidence of its use is traced back to the Mokaya people of Mexico and Guatemala. The Mayans and Aztecs both made chocolate beverages. It was called “xocolatl” which means “bitter water.” Ceramic vessels with cacao residues have been found dating back to 1900-900 BC.

Several mixtures of cacao are described in ancient texts for ceremonial, medicinal or culinary purposes. These mixtures included maize, chili, vanilla and honey. It is believed cacao was also ground by the Aztecs and blended with tobacco for smoking.

For these early cultures cacao was both a ritual beverage and a major currency system. The Aztecs received a yearly tribute of 980 loads of cacao, in addition to other goods. Each load represented exactly 8,000 beans. 80 to 100 beans could buy a new cloth mantle.

The Maya believed that cacao was discovered by the gods in a mountain that also contained other food delicacies. In April the ancient Maya celebrated an annual festival to honor their cacao god, Ek Chuah. They also used cacao to fight fevers, aid digestion, uplift the spirit and increase stamina.

Cacao beverages used in rituals were only for men, as it was believed they would be toxic to women and children. Cacao used in ceremonies, is a drink made from cacao, hot water, and possibly a few spices, but no sugar. It is a very bitter drink. A few spices may be added to counter the bitter flavor.

New studies show that chocolate may lower cholesterol levels and prevent memory decline. A few pieces of chocolate every month may make you live longer. Cacao is loaded with antioxidants that help build immunity. The fatty substances in the seeds are now often made into moisturizing creams and lotions that are good for the skin. The high level of flavonoids in cacao give it its anti-inflammatory and stress reducing qualities.

There are three types of cacao: Criollo, the most valuable strain; Forastero, a bitter, more common strain; and Trinitario, a hybrid of the two, which has a fruity scent without the bitterness of most readily available cacao.

To create cocoa powder, a very high heat is applied to the cacao beans. This process reduces its nutritional value compared to cacao powder, but makes it less bitter and is often preferred in flavor for baking and confections. Cacao powder on the other hand, is quite bitter, but retains the full nutritional value not lost by heavy processing.

Cacao beans are fermented, dried, cleaned, and then roasted. Removing the beans shell creates chocolate nibs that are then ground into a cacao mass of pure chocolate. This substance can then be liquefied (called chocolate liquor), and sweetened or flavored. (The end product, chocolate, is most often flavored with vanilla, but other flavorings are used as well.)

The Latin name, “Theobroma” is derived from the Greek meaning, “food of the gods.”

Cacao was first introduced to Europe, by Columbus as a gift to the Spanish King, Ferdinand, as a beverage. Columbus learned of it from his meeting with Moctezuma in 1519. Within a century the culinary and medicinal uses of chocolate had spread to France, England, and other parts of Europe. The longing for chocolate led the French to establish cacao plantations in the Caribbean.

Chocolate liquor has two components: cocoa solids and cocoa butter. Most chocolate eaten today is in the form of sweet chocolate that is a combination of cocoa solids, cocoa butter or other fat, milk, sugar, and possibly a flavoring such as vanilla.

Cacao oil is also known as cacao butter, high in omega-6 fatty acids, it helps restore skin by improving the flow of blood to the surface of the skin and increasing overall circulation.

White chocolate contains cocoa butter, sugar and milk, but no cocoa solids. Raw chocolate derived from the beans is called the nibs, as it has no other additives mixed with it.

The pulp from the fruit pods is used to prepare refreshing juices and jellies. It is also now being used to make alcoholic drinks.

While chocolate originated in the Americas, two-thirds of today’s cocoa comes from West Africa, mostly from the Ivory Coast.

The seeds of the cacao tree are intensely bitter and must be fermented in order to develop their flavor.

The cocoa solids are the source of the flavonoids and alkaloids (such as theobromine, phenylethylamine, and caffeine).

Cacao, and by extension dark chocolate, is known for its antioxidant and anti-inflammatory properties.