Butterbur is an herb used in both Western medicine and Traditional Chinese Medicine (TCM). With a long history of several applications, including curing the plague, it is now commonly used to treat migraines and seasonal allergy symptoms, such as coughs, itchy eyes, and nasal congestion.

Watch a short video, from Ann Christensen, Founder and Creator of White Rabbit Institute of Healing™ – Butterbur and the Question of PA’s…

Below is an overview of butterbur, combining the best of Western Science, Oriental Medicine, Traditional Chinese Medicine (TCM), Shamanism, Folklore, and a wide range of healing modalities. Gain a balanced and thorough understanding of the healing properties of butterbur.

How to take FULL advantage of Butterbur's healing powers... 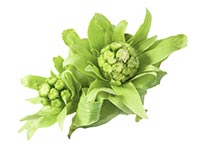 JOIN ME in an exploration of the healing herb, Butterbur (Kuan Dong). Dive deep into the benefits and applications of Butterbur, from Eastern and Western perspectives, and so much more!

Common butterbur (P. hybridus) is a robust perennial that can grow to be 3 feet in height and spread to up to 5 feet. It has tiny flowers that cluster at the top of each flower stalk with greenish sepals. The leaves are large and heart-shaped, some measuring 13 inches wide. They are cream and green in color. They begin to flower in early February emerging 3 to 8 weeks prior to the very large leaves. Butterbur is a member of the daisy family.

Butterbur grows in Europe, Asia, and parts of North America. It likes wet marshlands, damp forest soils, and riverbanks. Japanese butterbur (P. japonicus), is native to China, Korea, and Japan. This variety has now been introduced to North America.

Caution: Considered safe, though it should not be eaten raw as like comfrey and coltsfoot, butterbur contains PA alkaloids (pyrrolizidine alkaloids) that can seriously harm the liver. Be sure to also use commercial preparations that are PA-free and therefore safe.

In the Middle Ages, butterbur was used to fight the plague. It was dried as a powder and mixed with wine to prevent plague and other virulent diseases. Butterbur roots were also used as a heart stimulant and to treat worms. Over time it has been shown to be a useful remedy for, among other things, coughs, asthma, stomach upsets, and migraines. It is also used externally to treat wounds.

The botanical name, “Petasites” derives from the Greek name for the felt hats worn by shepherds and refers to the size of the leaves.

Butterbur (Petasites hybridus, P. Japonicus) is related to coltsfoot (Tussilago farfara). As butterbur is sometimes called coltsfoot, be sure to check the botanical name of the plant you are using. They are not the same.

Native Americans used the herb as a remedy to heal wounds, ease back pain, and relieve headaches..

Butterbur extract can be made from the leaves, roots, or bulbs. The stalks of Japanese butterbur (P. japonicus) are edible and often called “Fuki.”

Pyrrolizidine alkaloids (PAs) are compounds that are known to cause serious harm to the liver. Some butterbur preparations can contain these harmful compounds. Be sure to use products that are certified and labeled “PA-free.” The young leaves of the plant contain higher levels of PAs than older leaves

Butterbur is considered to be as effective or preferred to the common allergy drugs Zyrtec and Allegra which contain antihistamines and can cause dizziness.

The active ingredients, petasin and isopetasin, found in butterbur help to relieve the pain and frequency of headaches. Petasins are chemotypes that are known for their anti-inflammatory effects. They help relax blood vessels in the brain that can become over-excited during a migraine.

Butterbur seeds have historically been used in love potions and divination. They were to be sowed by a young unmarried woman a half an hour before sunrise on a Friday morning, in a lonesome place. As she did this she would see her future husband mowing a scythe not far away from her.

Pyrrolizidine alkaloids (PAs) are compounds that are known to cause serious harm to the liver. Some butterbur preparations can contain these harmful compounds. Be sure to use products that are certified and labeled “PA-free.”

The common name, butterbur, is believed to have derived from the leaves that were once used to wrap butter in to help keep it fresh and cool during the summer months.

Petadolex is a proprietary butterbur extract made in Germany by the company, Weber & Weber. It is popularly used to treat migraines.

How to use Butterbur (Kuan Dong) and take FULL advantage of it's healing powers!