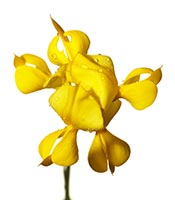 Decoctions of broom are used to treat kidney and bladder infections. Not to be confused with either Spanish broom (Spartium junceum), a different plant that can be poisonous or butcher’s broom (Ruscus aculeatus), which helps tighten blood vessels and capillaries, broom (Cytisus scoparius) can be used to regulate heart rate and stimulate urination. In fact, its most common use is to reduce excess fluids from the body in cases of congestive heart failure. In Germany, broom is considered gentler and less toxic than the drug quinidine used for treating heart arrhythmias.

Broom is a shrub that can grow up to 3-5 feet tall. Its long, slender, erect branches grow in large, close fascicles. The leaves are alternate, hairy when young, with three small, oblong leaflets. Generally it has no leaves. The plant’s flowers are bright yellow, fragrant, and are either grow solitary or in pairs. The flowers bloom from April to July and are succeeded by oblong, flattened pods, about an inch long with hairy edges and smooth sides that become nearly black when mature. When the seeds burst forth in July they make a notable popping and crackling sound.

Indigenous to England, broom now grows wild all over temperate Europe and northern Asia. It is also naturalized in sandy soils in North America, Chili, Africa and Japan. It likes sandy pastures and open fields.

Caution: Not recommended for pregnant women as it is commonly used to stimulate contractions for childbirth.

History/Folklore: It is the only native medicinal plant in England that is used as an official drug from the pod-bearing Leguminosae family of plants. It is recorded in early herbal documents dating back as early as 1485. It was an ancient Anglo-Saxon that then became a Welsh herb used in the Middle Ages and continues to be used up to the present day. The blossoms were used to treat gout.

The sparteine alkaloid found in broom has similar properties to nicotine, slowing the heart rate by suppressing certain nerve impulses. Sparteine has also been shown to temporarily raise arterial pressure followed by a longer period of decreased vascular tension. These effects have suggested it is useful as a heart tonic good for regulating chronic valvular disease with the added benefit of none of the cumulative action such as occurs with Digitalis.

The isoflavones in broom are estrogenic.

The dried powdered tops used in infusion and decoction as a diuretic. Water and alcohol can be used to extract the plant’s medicinal properties.

The powdered seeds were used in tinctures to treat liver complaints. The seeds were also used as a substitute of coffee.

The plant’s name, Sarothamnus, derives from the Greek words meaning “to sweep” and referring to the plants stems and brush-like branches as commonly being used as material for making brooms.

The plant has been used in English heraldry as a symbol of brightness, tenacity and strength. The plant’s medieval name, Planta genista, gave the family of King Henry II of England, their name: Plantagenets.

The Scottish clan of Forbes use broom as their badge and wore it to promote heroism in their chieftains.

An old traditions says that when Mary and Joseph were fleeing into Egypt, the plant was cursed by the Virgin because of the crackling sounds the ripe pods made when they touched them, threatening to reveal their location to nearby soldiers who were hunting them.

The roots grow deeply into the ground and can resist drought. The plant prefers dry, sandy soil.

The twigs and branches are used for making brooms, basket-work and as thatching for cottages or for making fences or screens. The fibers have been used to make paper.

The leaves and pods are mildly toxic to farm animals if eaten in large amounts.

The plants long, slender, erect branches that grow in large, close fascicles made it a natural source for making brooms, hence its English name.

Broom Not Spanish or Butcher Broom

Spanish broom (Spartium junceum) is a different plant and can be poisonous. Butcher’s broom is also a different plant used to constrict blood vessels (Ruscus aculeatus). Be sure you are using true broom (Cytisus scoparius).

The flowers contain no honey, but are still a great attraction for bees due to their high pollen content.