Recognized by the World Health Organization as a viable food source for children suffering from malnutrition, blue-green algae and spirulina are well-known for their high-protein and nutritional properties. The algae are famous for diminishing fatigue, strengthening immunity and detoxing the body. Due to their photosynthetic activities, they are said to bring light into the body to help heal and restore balance. 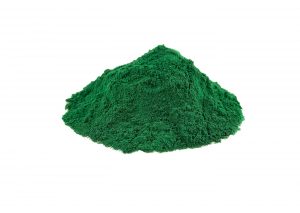 JOIN ME in an exploration of the healing herb, Blue-Green Algae (Lan Zao) / Spirulina. Dive deep into the benefits and applications of Blue Green Algae / Spirulina, from Eastern and Western perspectives, and so much more!

Blue-green algae are a phylum of bacteria, called cyanobacteria, that obtain energy from photosynthesis. It is a large and diverse group of simple, plant-like organisms that are found in both salt and freshwater. Blue-green algae are nitrogen-fixing bacteria that can live in water and damp soils the world over. They range from unicellular to filamentous species. Spirulina is a variety of blue-green algae.

Blue-green algae (A. flos-aquae) is only found in the fresh-waters of Klamath Lake, Oregon in the Western United States. Spirulina can bloom in salt or fresh, temperate waters, but is typically farmed in controlled environments. Other species of blue-green algae can grow in other freshwater environments.

History/Folklore: Blue-green algae and spirulina are cyanobacteria. These one-celled organisms are thought to have converted the early atmosphere by producing gaseous oxygen as a by-product of photosynthesis. This process was said to be the “rusting of the Earth” and caused the Great Oxygenation Event that changed Earth forever, allowing new, more-complex life forms to develop.

Spirulina (Arthrospira platensis, A. maxima, A. fusiformis) is a naturally occurring blue-green algae that is commonly grown in a controlled environment. Blue-green algae (Aphanizomenon flos-aquae/AFA) is grown commercially in the wild.

Blue-green algae and spirulina are in fact, a phylum of bacteria and not true algae. Bacteria are single-celled organisms. True algae can be single celled or made up of multiple cells able to grow dozens of feet long. Algae are photosynthetic and are neither plant, animal or fungi. Blue-green algae and spirulina are single celled algae that have both algal and bacterial characteristics, being prokaryotes and capable of oxygenic photosynthesis. Prokaryotes are single-celled organisms that have neither a distinct nucleus with a membrane nor other specialized organelles. Bacteria and cyanobacteria are prokaryotes.

New research suggests that algae may have potential as a renewable energy source by converting sunlight into electricity. Efforts are currently being explored to commercialize algae-based fuels, such as gasoline and diesel.

NASA has recommended spirulina be grown in space to feed the astronauts, declaring it 1000 times more nutritious than any other fruit or vegetable.

Spirulina has been a food source for the Aztecs and other Mesoamericans. After the sixteenth century, when many of their lakes, where the algae grew, were drained for agricultural and urban development, the food fell out of common usage.

Spirulina has been used successfully as an economical and highly-nutritious food source to feed the poor and promote better health in children. The World Health Organization recognizes spirulina as being safe and without risk for feeding children suffering from malnutrition.

Spirulina has the highest level of gamma-linolenic acid (GLA), or “good” fat, compared to other blue-green algae. GLA supports healthy brain and heart functioning. Spirulina is also generally considered a more-hygienic food source than many blue-green algae for its ability to thrive safely in more diverse environments, and it is often farmed in highly-controlled, safe conditions. An exception is Klamath Lake blue-green algae, which is grown wild and considered very safe, due to the pristine nature of its environment.

The constituent makeup of spirulina is said to match mother’s milk in its nutritional value and content ratios, making it, along with its simple cellular structure, extremely easy to digest and be absorbed by the body.

In China, the largest algae bloom ever recorded took place in 2013, and turned the Yellow Sea green. The growth was believed to be related to pollution from agriculture and industry. More than 20,000 tons of algae washed ashore.

In Japan, the word marimo means “seaweed ball”. They are often also called marimo moss balls. In fact, these balls are not seaweed but balls that form from strings of algae that roll around in the shallow areas of lakes rounding out into spheres. In nature they will rise and fall as the algae photosynthesizes rapidly causing oxygen to carry to them the surface. When the light lessens they fall back to the bottom.

Blue-green algae are one-celled organisms that absorb toxins directly from their environments, so be sure the source is clean and nontoxic.

Research indicates that, contrary to popular press, spirulina is not a reliable source of active Vitamin B12, which is the type best-absorbed and used by humans.

Blue-green algae and spirulina are considered the most nutrient-dense foods available and are therefore, often called “superfoods.”

How to use Blue-Green Algae (Lan Zao) / Spirulina and take FULL advantage of it's healing powers!