Edible and medicinal, the blackberry has been used by Native American’s and Western Europeans for centuries. It has a long history of healing female disorders and being used in spells for protection from ghosts and vampires. Used in syrups, liqueurs, teas, and pies, blackberry leaves are cooling and the roots are astringent. Often used to treat sore throats, diarrhea and wounds. The leaves were often used to wash wounds and help stop them from excess bleeding.

Blackberries are a perennial plant that has white flowers with five petals that bloom April and May. They have biennial stems and produce a number of new stems from the root stock each year. It is these stems that will fruit in their second year and then die. The vines are long and thorny. They are members of the Rose family. The blossoms and fruit, both green and ripe may all be found on the bush at the same time, a feature not often found in plants.

Native to Europe and now naturalized in the Americas, Australia Eastern North America, it grows along roads, woodlands, and open areas. It likes well-drained soil. 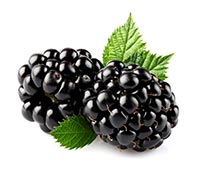 History/Folklore: Old folklore and witchcraft traditions claim that blackberry leaves help return evil to enemies that sent it while also removing evil spirits from your home.

In Great Britain folklore tradition suggests that blackberries should not be picked after Michaelmas (September 29th) as the devil is said to have claimed them by having urinated on them.  As the weather is wetter and cooler this time of year it is the time that molds can set in making the plants toxic and unfit to eat, so in fact, it is not a bad practice to leave late harvest berries alone.

Blackberry leaves have been found to help prevent stomach ulcers and can be used as an effective antibiotic to fight against the bacteria, Helicobacter pylori, associated with causing such ulcers.

The USDA (US Department of Agriculture) reports that blackberry leaves used in tea have higher antioxidant compounds than the berries do.

The tannins in the leaves help fight diarrhea and dysentery. A heaping teaspoon of dried leaves in a cup of boiling water, with a half cup taken per hour is one recommended dosage for treating diarrhea.

Blackberry leaves can be combined with sage leaves for aiding digestive difficulties and bloating.

Old English folklore says that passing under an archway of blackberry brambles will cure, or prevent, hernias, ruptures, and pimples. Celtic lore said blackberries were the fruits of faeries and therefore taboo to eat. Early Christian mythology relates blackberries to both Christ and the Devil. Some say the brambles were used to make Christ’s crown of thorns which is why the berries turn from red to black. Some stories relate that the Devil, Lucifer landed in a bramble of blackberries when he was cast our of heaven. Still blackberries were understood to ward off evil, ghosts and vampires. If they are planted near your home a vampire would not be able to enter, as he would begin to count the berries and would forget what he was up to!

The plant’s thorny branches are used for protection. The vines are woven into protective wreaths and the leaves are used to treat all sorts of feminine issues dealing with fertility. The cooked berries are used in spells and cooking to insure prosperity. The berries are often baked in pies to celebrate First Harvest festivals.

Blackberry is not native to China. Western healers of TCM integrate blackberry into herbal protocols and formulas as needed as it is more easily available in the America’s and Europe.

A permanent black die can be made using blackberry leaves and lye. An orange dye is made using the roots, and a bluish grey dye is made from the berries.

The leaves should be harvested before or during flowering and the roots are best harvested in the Spring of Fall after the berries have been harvested and dried quickly in an oven or under the hot sun.

The fresh leaves can be applied to burns, hemorrhoids, skin ulcers and eczema.

Benefits of the Fruit

The fruit is especially good for the liver and kidneys, and the leaves are good for the stomach and intestines.