Black pepper stimulates the taste bud sending a message to the stomach to increase its hydrochloric acid secretions which improve the digestion of proteins and other food components. This increase in digestive activity also ensures that food is properly digested before arriving in the intestines, where undigested food can increase unwanted bacterial growth and cause constipation or diarrhea. Black pepper helps stimulate the breakdown of fat cells and helps prevent atherosclerosis.

Watch a short video, from Ann Christensen, Founder and Creator of White Rabbit Institute of Healing™ – What the Compound Piperine, in Black Pepper, Can Do For You.

Below is an overview of black pepper, combining the best of Western Science, Oriental Medicine, Traditional Chinese Medicine (TCM), Shamanism, Folklore, and a wide range of healing modalities. Gain a balanced and thorough understanding of the healing properties of black pepper.

How to take FULL advantage of Black Pepper's healing powers... 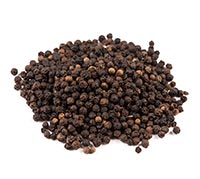 JOIN ME in an exploration of the healing herb, Black Pepper (Hei Hu Jiao). Explore the benefits and applications of Black Pepper, from Eastern and Western perspectives, and so much more!

The black pepper plant is a flowering smooth woody vine that can grow up to 33 feet. It is in the family Piperaceae. They begin to bear small white clustered flowers after 3-4 years that develop into the berries that are dried and then known as peppercorns. The pepper berry is a drupe, producing a single seed. A single stem will bear 20-30 fruiting spikes.

Native to Southern India, black pepper likes hot humid tropical climates. It is extensively cultivated in India and other hot tropical regions of the world. Vietnam is the world’s largest producer of black pepper.

Caution: Very safe. The essential oil can be irritating to the skin.

History/Folklore: Black pepper is called the “King of Spices.” The potassium in black pepper aids digestion and the outer layer of the peppercorns aids the break-down of fat cells. In ancient times, when there was no refrigeration, it was especially valuable for its ability to mask a food’s lack of freshness. However, pepper used as a preservative is questionable as the value of the spice and the amount needed to preserve meat would make it less desirable than salt, an excellent preservative. Pepper was valued as a flavoring and medicine.

Ancient Romans used both black pepper and long pepper (Piper longum), they were both referred to as “pepper.” Long pepper fell out of favor with the later introduction of chili peppers from the New World. As a medicine, long pepper is stronger than black pepper. Both have been used to treat eye problems.

Black peppercorns were found stuffed in the nostrils of Ramesses II of Ancient Egypt as part of the mummification process.

Pepper has been so important to ancient cultures that it has been used as a currency, called “black gold”, and as a sacred offering to the gods. In Greece, it was used to honor the gods and pay ransoms and taxes. When Rome was invaded, by Atilla the Hun, he demanded 3,000 pounds of pepper as a ransom for freeing the city as an honored peace offering. Pepper was one of the key spices that the ancient spice trade was built upon, leading to the discovery of new lands and the building of new trade routes across the European and Asian continents. Black pepper is the world’s most commonly traded spice.

By the third century CE, black pepper was first mentioned in Chinese texts where it is described as “foreign pepper.” By the 12th century, it was a popular ingredient in cuisine. Medicinally, it is recognized in Traditional Chinese Medicine for its Warming, Moving, and Descending Qi Downward properties.

The Dutch use the phrase “peperduur” meaning “pepper expensive” to describe a very expensive item.

Black (half-mature, about to turn red and dried), green (unripe berries), and white peppercorns (entirely ripe berry is soaked in brine to remove the dark outer skin, exposing the inner white-colored pepper seed) are all from the same fruit (Piper nigrum). The difference is derived from the different stages of development and processing methods. Orange and red pepper consists of the ripe red pepper drupes from the plants being preserved in brine and vinegar. Pink peppercorns are from an entirely different plant, the Peruvian pepper tree (Schinus molle).

The spiciness of pepper is due to the constituent piperine. Once the berries are dried, pepper spirit and oil can be extracted from the berries by crushing them. Pepper spirit is used medicinally and in beauty products. Pepper oil is used in Indian Ayurvedic Medicine as a massage oil. Pepper was one of the few medicines a Buddhist monk was allowed to carry.

Black pepper used in large amounts may have abortifacient properties. Used as a seasoning it is safe to consume but in high doses, it can cause upset stomach, uterine cramping, and diarrhea.

Piperine is being studied for its ability to increase the absorption of selenium, vitamin B12, beta-carotene, curcumin, and other compounds. Studies indicate that levels of selenium, B6, and beta-carotene are significantly increased in the blood by almost 60% while using black pepper signifying that black pepper may aid the body’s ability to hold onto and make better use of important compounds for improving immunity and overall health.

It is also being studied for its ability to reduce loss of memory and other cognitive malfunctions. Chemical pathways in the brain appear to be stimulated by piperine making it a possible aid to treating Alzheimer’s and dementia in older patients.

In Indian Ayurvedic Medicine, pepper is used as a tonic for treating colds, coughs, sinus, and nasal congestion.

The skin condition, vitiligo, which causes the skin to lose its normal pigmentation and turn white is aided by the stimulating effects the constituent piperine has on producing melanocytes pigments in the skin. Pepper is also said to reduce the chances of skin cancer due to excessive ultraviolet radiation.

The potassium in black pepper aids digestion and the outer layer of the peppercorns aids the break-down of fat cells.

In the 1840s, the word pepper was used to mean “spirit” or “energy,” and through the early 20th century the word was shortened to the slang word, “pep” to describe a person full of spirit and energy.

Black pepper was thought to protect against the ‘evil eye’ and wearing a peppercorn was said to free one of envious thoughts. Used in spells and charms, black pepper will banish negativity and provide protection. Burning black pepper before smudging your home with sage is a powerful combination. Black pepper will help remove negative energies and Invigorate Qi while the sage will soothe and cleanse the environment and spirit. Black pepper is also used in voodoo and black magic.

As an essential oil black pepper is used to provide comfort, support endurance and stamina, and increase flexibility.

In the tropical areas where black pepper is native, the ground peppercorns will be added to tobacco and smoked to ease pain caused by throat inflammation.

The adverse effects of irradiating (a non-organic process used on pepper and other vegetables and spices) cause a significant loss of pepper’s vitamin C content. Organic is best.

Whole peppercorns can be kept indefinitely if stored in a cool, dark, dry place. Ground pepper can only stay fresh for about three months. Pepper loses flavor and aroma through evaporation. Airtight containers help preserve its flavor and scent.

Strengthen the Mind and Heart

Black pepper essential oil is used to relax, invigorate the mind, and strengthen the heart.