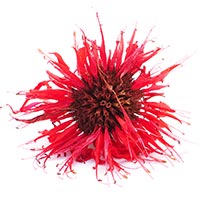 Edible and medicinal bergamot, also known as bee balm, is often used to treat skin eruptions, mouth infections, sore throats, and gastric disorders. Bergamot, or bee balm (Monarda didyma), is not the source of what is commonly called Bergamot (Citrus bergamia) Essential oil, and is the scent associated with Earl Grey tea. Bergamot (Monarda didyma) AKA Bee Balm, has been used by Native Americans for centuries to treat a wide variety of health disorders.

Bergamot, a hardy perennial, has like other members of the mint family, Lamiaceae, square, grooved and hard stems that grow about 2 feet tall. Its leaves are dark-green with tinged reddish veins and are rough on both sides. The blossoms are showy, ragged, scarlet flowers in large whorls at the top of the stem, supported by leafy bracts. Various cultivars of the plant will have flowers that can come in pink, red, white or purple.

Bergamot is native to North America. It likes moist, light soils to heavy clay soils and prefers partly shady to sunny places to grow. It does not like humidity or tropical regions. It likes to grow in dense clusters along stream banks, thickets and ditches.

Parts Most Frequently Used: Fresh and Dried Flowers and Leaves

Caution: Caution if pregnant as the plant can stimulate uterine contractions.

History/Folklore: The species native to North America, Monarda punctata, is a wonderful source of thymol. The related American plant M. didyma, the Scarlet Monarda, is also said to contain thymol but in smaller amounts and of a slightly different composition. Thymol is known for its antiseptic, antibacterial, and antifungal properties.

Native American peoples have used the plant for thousands of years. The first written account is the description in 1596 by Nicholas Monardes, who gave the plant its botanical name, “Mondara.”

The plant has been used by Native Americans for its strong antiseptic action and to treat skin infections and minor wounds. Native Americans recognized four varieties of the plant which each had different scents. The plant was used in ceremonial sweat lodges for its scent and active diaphoretic properties.

Native Americans also used the plant to treat heart disease, colics and colds, and to regulate menses, stimulate the appetite and as a decongestant. They also used it to treat a wide variety of stomach disorders including flatulence.

An herbal tea made from the leaves is used to treat mouth and throat infections caused by dental issues and gingivitis. Bergamot/Bee Blam is a natural source of the antiseptic thymol, the active ingredient in modern commercial mouthwash formulas.

Steam inhalation of the plant is used to treat sore throats, bronchial infections with inflammation of the mucus membranes and increased flow of mucus.

Used externally in poultices it is used to treat skin eruptions, infections and minor wounds. An English medical study, even indicates that the constituent thymol, present in bergamot/bee balm may be more effective than prescription creams for treating acne. It is a good remedy for burns and inflammations. The lemon scented oil is used to scent soaps.

The lovely scent of the flower, leaves and roots make it a wonderful choice for inclusion in potpourri as an addition to a hot bath to revitalize your spirit and perfume your water.

The name “bergamot” derives from the scent of the plant’s flower, leaves and roots that resemble Bergamot Orange, Citrus bergamia, the source of bergamot oil used to flavor Earl Grey tea. The common name “bee balm” derives from the fact that bees love the nectar of the sweet smelling blossoms.

In America, the herb is known as “Oswego Tea” because an infusion of the young leaves was used by Native Americans to increase stamina. It grew in popularity to become a common beverage enjoyed by colonists in many parts of the United States. Oswego tea was even used by the colonists to replace English tea after the Boston Tea Party, when colonists threw English tea into the harbor in protest of high taxes laying the groundwork for the American war of Independence from the British.

The species is a favorite for gardens because of its aromatic and showy scarlet flowers and pale-green tinged with red aromatic leaves. It is a good companion plant as it attracts bees and other pollinating insects. Many like to grow it near their tomato plants.

Thymol, a key natural constituent in bergamot is a natural antiseptic.

In the 19th century bergamot was given to young brides and mothers as a tonic.